The Menace of Mopeds in the Medina: Need for Speed 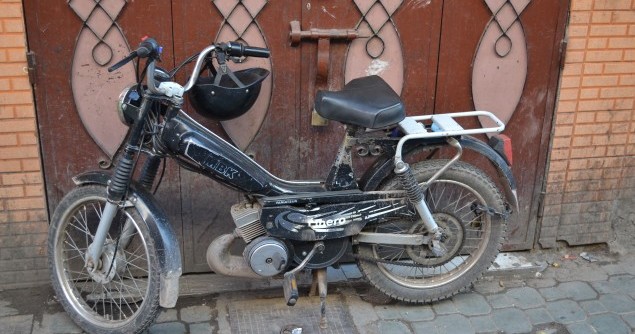 As much as I love the Medina, walking around it has been getting worse these last few years. It’s not so much the crowds, that’s part and parcel of a busy shopping area, and the occasional donkey traffic-jam is just everyday life in action – it’s the only way you can get heavy things through the narrow streets, just as the hand-carts serve a very important role in keeping the shops and riads stocked up.

The main problem now is the amount of moped and motor scooters that race far too quickly through what has, for over a thousand years been no more than a pedestrian area – long before we even thought of pedestrianisation.

The traders at the Derb Dabachi, one of the main entrances to the souk, have got fed up of the noise, pollution, danger and stress of the mopeds and scooters that cause havoc in the area and have hung signs forbidding anyone to enter riding a bike or moped – and it’s working! The signs invite riders to become pedestrians and walk alongside their transport until they leave the area. Let’s hope other traders take the idea up and the Medina can once again become a ‘motor-free zone’.

When I read about this, it brought to mind an article I’d written on the same theme last year.

Mowed down by a moped in the Medina

When you are wandering through the souks, you spend half your time dodging mopeds. At least the mule carts and bikes travel at a sedate pace, but the mopeds are pretty nippy and it can give you a moment’s nervousness to be staring the rider in the eyes at a distance and speed that makes you wonder which one of you is going to come off worse in the inevitable collision. Fortunately they usually nip past without doing any physical or emotional damage – but that’s not to say it never happens.

Nine years ago, on my first visit to Marrakech, I’d just walked away from Jmaa el Fna and the handlebar of a moped brushed my side. It was summer, and I was wearing a lightweight shirt, and as I felt the handlebar touch me I turned into it to avoid anything serious happening. The rider was full of apologies, but I just patted him on the back, said something to the effect, “It’s okay, no harm done,” and he smiled and rode off. I turned to continue my walk, and felt a light breeze around my midriff, where the handlebar had torn my shirt right across the middle, leaving my stomach exposed. I hadn’t felt a thing or, in all the hubbub, heard anything either. I was more amused than anything else that I’d actually patted the chap on the back and parted with smiles, and here I was exposing my paunch for all of Marrakech to see.

And today, when an actual collision between man and moped did occur, I still walked away with a semblance of a smile.

I was ambling my way back to the riad I was staying at in the Sidi ben Slimane area, not taking a great deal of notice of anything, when I heard a moped rev up. I looked up, and about two metres away I saw a small boy on a moped careering towards me, and it was obvious by the panic in his eyes that he’d only learned how to go forward, he hadn’t quite got the hang of braking and steering yet.

If it had been a scene in an Indiana Jones film, where the hero was walking through the souk and an evil assassin was attempting to run him down, although it would probably have been a Harley Davidson in that case, and not just a tiny 50cc Yamaha, Harrison Ford would have dived out of the way at the last second, probably doing a roll through piles of antiques lamps and collapsing the tent poles that supported the awning to the shop.

Me, I’m no Indiana Jones, I’m neither quick witted enough or know how to do forward rolls to end a neatly executed dive, so I just stood there and watched the panic stricken ten year-old hurtle towards me. (Although to say ‘hurtle’ is probably gilding the lily a bit.) I made a half-hearted attempt to get out of the way but he hit my leg with the front wheel, which was probably the bit of steering assistance that turned him to the right out of any other harm’s way.

When I turned around he’d managed to stop, and was on that point where he could well have burst into tears. Behind me I heard a man shouting at the lad, but as he didn’t look at me it could well have been that he was pretty brassed off because the nipper had ridden the moped in the first place. I turned around, just as an old woman joined in the tirade. When I looked at the boy again he was even closer to tears, so I just waved my arms around a bit in a huffy sort of way and walked off.

But I did have a bit of moped malarkey earlier in the day. I’d gone to do an interview with a delightful young chap who is the only hand-made football maker in Morocco – more of that another day – but stupidly, I’d left my recorder in the riad, on the other side of the Medina. By one of those delightful quirks of serendipity, he lived about three streets from the riad, and offered to take me there on his moped. It was great, and I got a chance to see life from the other side of the handlebars.

We dodged and weaved through the crowded narrow alleyways, and there were times I thought my kneecaps were getting just that bit close to the walls. As we left the tighter alleys of the souk he took some of the wider streets, in deference to it being my first ride on the back of a moped, with a rear seat which clearly wasn’t built for someone my size. It was great fun, although I think I’d stick to a bike if I’m piloting something through the souks myself in the future.

This post was first seen on the Villa Dinari web site.

Derek Workman is an English journalist living in Valencia City, Spain – although he admits to a love of Morocco and would love to up sticks and move here. To read more about life in Spainvisit Spain Uncovered. Articles and books can also be found atDigital Paparazzi.