Banished: The Man Who’s ‘Too Handsome’ For Saudi Arabia 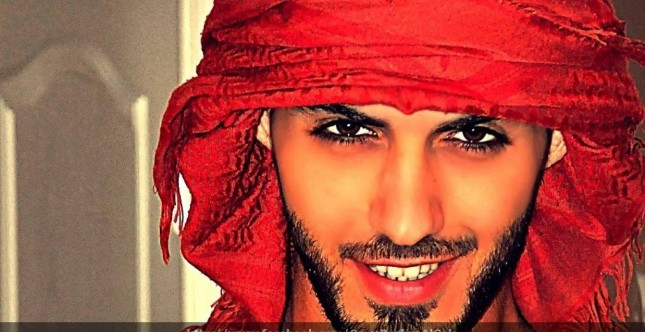 The news from the Middle East and broader Islamic World is as dismal today as it was yesterday. Syria continues to be a spiraling bloodbath, as does Iraq as we near the 10th anniversary on May 1 of the notorious Bush the Younger declaration of “Mission Accomplished.” Several hundred garment workers may have lost their lives in the collapse of an 8-story sweat shop in Bangladesh and the list goes on. There are times when those of us on the comfortable outside looking in need to take a breath and find something to laugh about in the onslaught of absurdity. The fact that yesterday I heard a lecture on Waiting for Godot is not entirely irrelevant for posting this blog.

For the Saudi purity police it seems that it is possible for a visitor to be so media-savvy handsome that local women need to be protected by deporting him. The case in reporting-stupidity point is about a certain Omar Borkan Al Gala, a fashion photographer, actor and poet from Dubai. England’s authoritatively silly tabloid The Sun carries the following subline: “THE internet is awash with speculation that one of the men deported from Saudi Arabia for being “too handsome” is a fashion photographer from Dubai.” For a pretend news source that Murdoch-murders the truth every chance it can get, there seems to be a voyeuristic fascination with Arab men’s bodies, including Saddam in his undies.

So is this guy really so handsome that he is a whipped-up man of mass distraction to the Saudi regime?

He certainly has an internet presence, so you can see for yourself on his Facebook page, where he has “159,403 likes · 64,233 talking about this” or his blog or even on a Chinese site or just type his name into Google images.

Let’s say that the real, albeit absurd, reason our Emirati Valentino was thrown out of Saudi Arabia was for being too physically attractive (to women of course). A picture posted on the the film blog Streamlux is a poignant reminder of Saudi hypocrisy. A Saudi man in Paris can see all the flesh that fashion allows, so why not at least allow Saudi women to look at a man’s face (which would be hard to avoid online at this point)? Salafi women are not supposed to be salacious, but Saudi men can get all the eye candy oil wealth can buy.