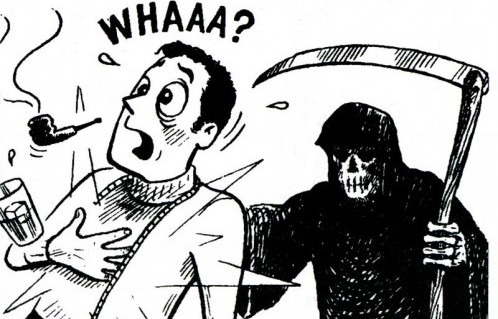 Most people find it hard to take cartoons seriously, apart from political satire and that can become a deadly issue, depending on the target. Given the recent Danish cartoon controversy it would seem that comics and religion do not mix well or at least settle well for the believers who see themselves as the target.

But what about comic relief for the political struggle between Israel and the Palestinians? Fundamentalist tract artist Jack Chick, whose comic empire is dedicated to winning souls for Christ by drawing on God’s hate, has been using his pen to spread a rather nasty version of the Gospel for over 40 years. One of his more recent offerings is called “The Squatters” and it provides a virtual roadmap to apocalypse.

When it comes to historical knowledge about the Middle East, Chick takes a luridly literal view of Bible history. The story is an old and simple one. God created the earth but ordained a small part of it, now called Israel and Palestine, for the seed of Abraham through Jacob. The black sheep in Abraham’s tent, namely Ishmael and Esau, became the Arabs, a rather sinister looking bunch as Chick depicts them.

God loved Israel, but Israel rejected their Lord, so God sent his son Jesus to die on a cross (and give Mel Gibson a movie plot) and that prompted Satan to invent the Catholic Church (which incidentally invented Islam, but that is another plot).

The Catholic church persecuted “real” Christians, including Hitler’s holocaust against the Jews. Then the Arabs join in the campaign, with the Palestinians being deemed “trash” by the oil-rich neighbors.

So what choice is there but world War III?

But wait, the worst is yet to come. The Bible Belt Christians all get raptured up into heaven and all hell breaks loose on earth with the Vatican and Israel foolishly signing a peace treaty. But along comes “The Beast” and persecutes the Jews worse than ever before and once again they call on God for help. Jesus comes and that’s the way the world ends, not with a bang but a burning lake of fire for the bad guys and streets paved with gold for the good folk.

Were this only a comic, it would be laughable, but Chick’s artistic imagination captures a common apocalyptic scenario of conservative Protestants who hate Catholicism and Islam equally. Given a reality check, Chick does not know squat about the history and cultures of the region. But then again, perhaps all he knows is squat.