The Joy of Learning for Atlas Mountain Girls 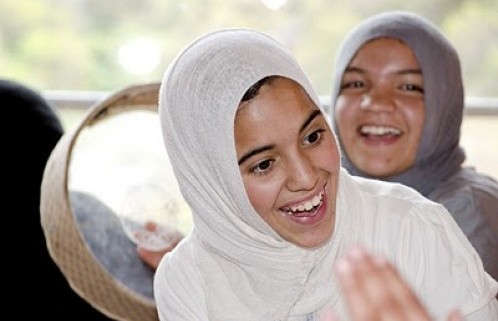 In 2006, Education For All was officially recognised as a Moroccan NGO and began to raise funds in earnest for their first boarding house in Asni, in the foothills of the High Atlas Mountains, forty-five kilometres from Marrakech.

The idea was that the organisation would provide for the educational needs of a number of young girls from the poorest families from some of the remotest villages in the High Atlas, for the three years required to complete their secondary education. An apparently modest undertaking, but one that would affect the lives of an initial group of twelve girls, increasing by the same number each year, in ways that may not have been considered.

A residence for the girls, Dar Asni, and the houses that were to follow, are all within a couple of minutes’ walk of schools, and take into account an anomaly of the Moroccan way of educational life for girls. Many boys will cycle to school and take their lunch with them. Sometimes a single class will be held in the morning and then another in the afternoon. Boys will simply stay at the school, but it’s considered unsafe for girls to do that, so they are expected to return home, which is impossible if they live far away. Often they’ve walked considerable distances, and on occasions when time-tabling is particularly erratic they’ll miss a day’s schooling completely. But the girls at the EFA houses can simply walk across the road.

It’s very easy to make a fleeting comment about someone starting school in a new town, but behind that simple statement is a world of cultural and emotional complexity.

Think of yourself as the father of a young girl not yet even into her teens, and a group of foreigners come along to tell you that you should send her to a private boarding-house miles from home. “It’s for her benefit,” they say, but you possibly aren’t too well educated yourself, and the idea of putting your daughter into the hands of foreigners who aren’t part of your culture or religious beliefs might be something you are very wary of. Wouldn’t you rather take the counsel of someone of your own faith, a father himself and, even if not a direct friend, someone who has earned the respect of those who know him well?

Hajj Maurice, a small man with a large moustache and a winning smile, is well known and highly respected throughout the villages of the High Atlas Mountains, not just because he has made the pilgrimage to Mecca, which entitles him to the honorific ‘Hajj’, but for the work he has done as a mainstay of the Association Bassins d’Imlil. As the father of two daughters, he was aware of the importance of education for young women, especially following the sad loss of his eldest, who died of leukaemia while in her early twenties.

For weeks Hajj Maurice walked the mountains, talking to fathers and families, trying to convince them that allowing these young girls to live at Dar Asni while continuing their education was not only the best thing for them as individuals, but also for their families, their future children and their communities. Some families accepted with alacrity; the only thing that had stopped them doing it in the first place was that they simply had no money. But others were less convinced, and despite all his wiles and arguments, Hajj Maurice sometimes had to leave without even the concession of “we’ll think about it.”

Now put yourself in the place of an eleven year-old girl, eager for new sights, friends and experiences, despite never having been outside the confines of your village. You speak only Berber, a language so different from the national language of Arabic in both its spoken and written form that you may as well be going to another country to study, not a village thirty kilometres away, because Arabic is the language all your classes will be in. And then imagine that for the first time in your life you will have your own bed to sleep in, your own cupboard to put your clothes in and a washing machine to wash them – no more going down to the river to pound them on rocks. The boarding house might seem like a palace, but your new life still takes some getting used to!

Karima Targaoui is Education For All’s longest serving volunteer, spending over a year with the girls before returning to her home in Vienne, near Lyon in France. She still works with EFA as the coordinator of volunteers.

“I began volunteering with EFA on November 2009. (It seems like it was yesterday!) When I arrived in Dar Asni I was surprised; the house is so pretty and the organisation directed by Latifa (the house mother) is really good. Everyone was so nice. A week later is was hard to leave them and go to Talat N’Yacoub.

“The first days were really hard. I was in the middle of nowhere, the girls didn’t know each other yet, EFA wasn’t well-known by the locals so they were suspicious, and the house wasn’t started. I really felt like I couldn’t do it. But I began to build a relationship with the girls and I realized how much they needed somebody to help them. That motivates me to succeed. Then Khadija, the gorgeous house-mother arrived, and I felt immediately comfortable with her. Together we did a lot of work; first with the girls, who now feel like sisters and have changed in many ways; secondly in the house, which became really nice and warm; and finally with the community around Talat N’Yacoub, who know us, respect us, encourage us and help us with our project. And all this with the help of the committee, of course, who is always present and helpful despite the distance. And I thank them for this and for the trust they gave me.

“I’m really proud to be a part of this project when I see how the girls have evolved, ” says Targaoui.

“They didn’t only improve their marks at school, they became more open-minded, independent and have a better understanding of life. They are conscious that education is the key to their individual and collective future. They are becoming real women, the women who will change Morocco.”

This is an extract from A Different Life, the story of Education For All. You can learn more here.

Derek Workman is an English journalist living in Valencia City, Spain. To read more of his stories on Spain, visit SpainUncovered. Articles and books can also be found at DigitalPaparazzi.