Full Moon Drumming in the Desert: Not to be Missed 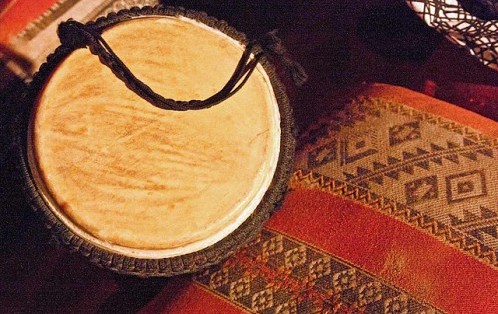 That’s my drum. I’ve been looking forward to this. My moment in the desert in the dark, beating something senseless for no good reason other than for the sake of rhythm. It’s one of the only drums left – all those before the stage have been taken already, and I’m so squat that when I’m seated on the dusty cushion laid flat on the sand, I can’t see a thing except my son’s white teeth in the dark next to me. He’s wearing one of those goofy grins – well done Mum, this has been a good idea.

The session begins, and I find that sight is not important. Our drum-master booms instructions heavier than the beats. He speaks in some African dialect – Swahili? I don’t know. He translates – “CLAP YOUR HANDS!” he thunders. We obey. He dances and struts on the stage between flaming torches like an mythical king on cooky cactus. I stand quickly to snap his photo, but am drawn back down by both my son, and the desire to rejoin the pattern – I am standing out like a pulled stitch.

Within five minutes, he has us all whooping and beating like old-time jungle drummers. Somehow he has managed to arrange a muddle of expats into a percussive orchestra, and we sound good. Even my rhythm-deprived four-year-old has joined me on my lap, and manages to keep time. It’s well past his bedtime, but he is wide awake. Who needs caffeine when there is music? After another five minutes I have had enough, and luckily, our master is also starting to wind down. My hands are stinging – as when slapping a child, I feel like they have come off with the worse side of the deal. The drum is uninjured, but they are red-raw, pinched where I wear rings, and as hot as the campfire behind us.

We retire to the outskirts, grabbing a quick shwarama before 200 others leave the drum pit, and finding the only table left without a smattering of temporary food receptacles and personal articles. It’s low and surrounded by majlis-style pillows, and so I thankfully plunge my free hand into the cool sand and wait for Hambone to return with a beverage for the other one.

The kids disappear. We are with friends, and they too have lost their offspring. They keep on running to the top of a sand dune, knowing that after three struggles up the blasted things, their parents will leave them alone up there. They toboggan or sandboard down occasionally, but just for a mouthful of biryani or fanta, then disappear again. One comes back with a balloon doggie from somewhere, and another painted like a zombie. They’ve found their novelty corner as we have found ours -which is the bar – serving reasonably priced cheap swill that tastes amazingly good in the desert in the moonlight.

The fire-breather stomps onto the carpet stage between drumming sessions, both scaring and delighting the children. And even though I’ve seen this many times before, I enjoy it again. As I watch the spirits and sparks fly, I also quietly hope their carpets are not synthetic.

Santa arrives, Arab style on a camel. He is immediately pounded by an eddy of sandy children, who drag thin plastic toys out of his sack before he can tell if they need the pink or the blue wrapping. It reminds me of the melee of Crapmas last year, but here I forgive it – Santa is secondary at Full Moon Drumming. We expect little of him, as our hearts, lungs and bellies are already full.

We leave with one child asleep in my arms. The pain of stumbling up the sandhill to the outside of our comforting crater is diminished by the rare sight of seeing him smile while he sleeps. The other can’t stop talking. We climb into one of a fleet of 4WDs and the driver gives us a mini dune-bash on our way to the carpark, funning it up a bit for the kids, who are now all awake.

“Good night, Lion?” I ask my eldest as we climb back into our own car and start the late journey home.