The ‘Educational Revolution’ That Is Transforming Saudi Arabia 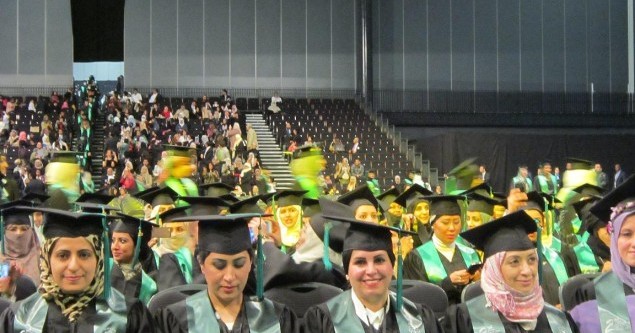 Flying under the media radar recently was a yet another decision by King Abdullah that is expected to have a far-reaching impact on Saudi Arabia’s future. At a workshop in Dubai, Dr. Saad Nasser Aldwayan, an international cooperation consultant for the Ministry of Higher Education, said that King Abdullah’s university scholarship program will be extended to 2020, according to the Saudi online newspaper Safaraa. The king launched the program in 2005, then extended it for another two years in 2007. It was extended a third time in 2009 for another three years. Committing the scholarship program through 2020 allows a new generation of Saudis to study at Western universities. It will bring students’ graduate and post-graduate skills home to help transform Saudi Arabia from its dependency on oil to a nonoil producer and exporter of Saudi goods. My wife benefited from the scholarship program, arriving in the United Kingdom in 2007 to study for her Ph.D and then returning this year to Saudi Arabia to a waiting job as an assistant university professor. During her five-year program, she came across scores of Saudi men and women studying a wide range of subjects. They couldn’t wait to return to Saudi Arabia with their newfound skills and begin serving their country. If I sound like an enthusiastic supporter of the scholarship program it’s because there is no other reform measure that will have the effect on young Saudis than a free university education. According to Safaraa, Saudis under the age of 40 account for 79 percent of the total Saudi population. An estimated 36 percent are under the age of 15. Those 15-year-olds will become eligible for the scholarship program in 2015 and will return home with university degrees before today’s 10-year-olds become eligible to enter the program in 2020 at the age of 18. An estimated 1.15 million Saudi students are currently enrolled at domestic and foreign universities and colleges with women making up 60 percent of the higher education student population. The scholarship program receives about SR 9 million annually that pays for 125,000 undergraduate and post-graduate students at about 3,000 universities worldwide. About 23,000 Saudi students are studying at universities in the United States for the 2010-2011 academic year. That’s a 43 percent increase over the previous year. About 20 percent of those students are women. Science, medicine and high-tech fields of study have attracted a large number of Saudi women. At Saudi universities women can now earn degrees in law, petroleum engineering, political science and journalism, although the reality is that few jobs in these fields are available to women. However, this is a remarkable turnaround for a country that had seen its 5 percent literacy rate in the 1950s climb to 79 percent today. The literacy rate for Saudi females between the ages of 15 to 24 jumped from 81.7 percent in 1992 to 96.5 percent in 2009. By 2020, at least 1 million young Saudis will have gone through the scholarship program with a majority coming home from Western universities. Imagine the implications. In the 1970s and 1980s, thousands of Saudi men attended universities in the United States and the United Kingdom. But in most cases they returned home without using their knowledge to implement more efficient ways to do business in the private and government sectors. As one Saudi told me recently, “It takes a lot of energy to fight the culture. After a while you just want to get along.” From my conversations with young Saudis today, the attitude is vastly different. Possessing the social awareness and technical knowledge not available to their parents and grandparents, young Saudis are impatient to be part of the global community. They desperately want to serve the interests of their country. They don’t want to gain knowledge for the sake of knowledge and a degree. They want to make a difference. A sign of the changing attitudes among young Saudi students is their willingness to attend Catholic universities such as Catholic University in Northeast Washington and the University of Dayton in Ohio in the United States. It’s common for Saudis not only to acknowledge that Catholic universities offer curriculum that matches their career goals, but those same universities share values similar to those of Islam. Attending such universities strengthens their commitment to Islam and embraces King Abdullah’s vision of interfaith tolerance. The cultural benefits of attending such universities reflect the global view of the new generation. While it may have been difficult for thousands of Saudi men to effect change in Saudi culture a generation ago, the same can’t be said for the new crop of university students who have a much broader view of the world due to exposure through social media. As we have seen with this past Haj and with other programs, socially conscious Saudis have volunteered their time to aid pilgrims and the poor. Even before young people are ready to attend a university, social media and the exposure of other cultures through the Internet has primed them to look at their own world with a critical eye. Their expectations will be high when they return from abroad. And it’s up to Saudi society to accommodate those expectations.