The Bible and Hollywood: A Match Not Made In Heaven 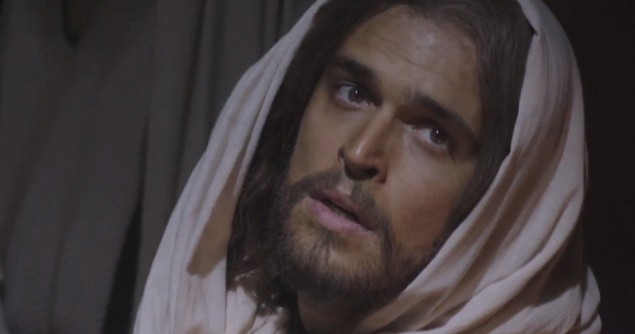 Hollywood loves making biblical movies and once in awhile there is one worth watching. Last night the so-called “History Channel” premiered a 10-part series with the novel title of “The Bible.” To cut to the chase, this is a really awful cinematic flop. It is definitely not worth watching, no matter what you think about the Bible as history. The first episode starts with Noah brandishing a Scottish accent in a leaky ark with pairs of animals, like giraffes, in the background. How giraffes migrated to Mesopotamia where Noah lived is, for historical accuracy, better left unmentioned.

In between plugging up holes in the shittim wood, with water swirling in the air around the inside of the box-like ark, Noah tells the story of creation, day by day. We get a glimpse of Adam and Eve, but not with any full body frontal nudity. Our first sight of Adam is a guy literally caked with mud, not the dust of the ground. How Eve got there is left out. The bashed-in head of Abel is shown, but no one delivers the classic line “Am I my brother’s keeper?”

The story jumps from Noah to Abraham, who convinces Lot to drag his wife along as the “tribe” moves to the promised land. The actor for Abraham could have taken lessons from Mel Brooks, who had Moses down pat in History of the World, Part One. There is a lot of hugging, but for the most part God is absent from the life of Abraham. Why anyone would want to believe in this bullying absentee creator is a mystery. Then one day three messengers appear, one looking Asian and another looking African and all three with full body armor. When Abraham hears that wicked Sodom is about to be destroyed, he asks the messengers to save Lot and his family.

Sodom is a steamy and seedy place with little evidence that the young looking Lot was actually made into a judge and sat at the city gate. Good King Melchizedek of Sodom, who was saved by Abraham, is left out of the cast. Nor is the command for Abraham to circumcise, the sign of the covenant and a rather important part of the story, included.

Beyond the drunken street carousing in Sodom, Lot’s willlingness to send out his virgin daughter rather than give up the messengers he had given shelter to is missing. He hardly needed to offer his daughter, as in this film the Asian looking messenger is a martial arts specialist and slices his way through the streets with Lot and family, after letting Jehovah (it is hard to tell because God is off camera much of the time) blind the evil doers. Lot’s wife turns into a pillar of salt, a historical item one should probably take with a pillar of salt, but the incest of Lot with his daughters in the case is conveniently omitted.

At the instigation of Sarah (who is not called Sarai in the start despite the fact that she does not become Sarah until Isaac is born), Hagar and her son Ishmael are sent out into the wilderness. This same Sarah never seems to wash her face. Indeed most of the characters are covered by blood, sweat and tears throughout the film. Abraham accepts grudgingly the command of God to sacrifice his son Isaac, although Isaac is less than thrilled to find out he is about to be the sacrificial lamb. But all turns out well, except for the poor lamb in the thicket.

What does this God of Abraham have against lambs? The story then shoots forward to Moses, skipping over Jacob to get to the next setting for unmitigated violence. At this point I turned off the television, having already wasted an hour in front of the screen. You know how it is when you think it can’t get any worse and it does.

Almost as bad as the film were the commercials. The first one was for Christian Mingle, a dating site which claims to have 1,000 new members every day. I suppose this will garner more interest from any Bible believers watching than the ad for an upcoming concert with Jimmy Buffet and the Coral Reefer Band. I am still wondering who this series is directed at. Christians who view the Bible as history will wince at the Hollywoodization of the Bible stories and commercial penchant to show lots of violence and gore.

God in the Burning Bush is a fantastic sound and light show, but why does Jehovah have to send a strong wind every time he speaks to mortals? Besides, the Bible Belters would be in church for the 8 pm showing in the east and the 7 pm venue in central time. History buffs who actually know the archaeology and literary criticism of the Bible will probably not last past the first five minutes. Anyone who appreciates decent acting will turn off within seconds. Noah with a Scottish accent?

I think I finally understand why The Bible series premiered last night; it was to set up a far more interesting blood curdling show called The Vikings. I would have stayed up to watch this, since perhaps it has some real history in it, but it was past my bed time.