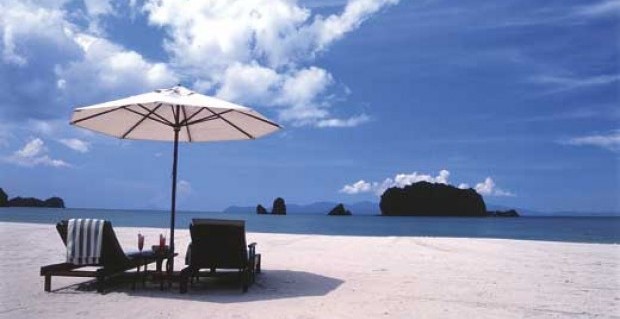 Book in hand, legs outstretched, feet perched on a small stool, I’m sitting on a balcony overlooking a white sandy beach. The sea is clear, with the gentlest of waves slowly bringing the tide in. The sun is bright and golden hot, its fierce edge softened by a light tropical breeze and a glass of the freshest juice beside me.

It was not a kind of heaven that I had ever imagined for myself.

Squashed in between travelling for work, and immersing myself in the vibrant city-state of Singapore, a couple of days at a beach resort had been almost an afterthought, booked only hours before departing from London.

I chose the Malaysian archipelago of Langkawi mainly because the flights fitted into my schedule. I hadn’t researched the hotel, but took second-hand advice from someone who had stayed there. It was, in short, not the kind of holiday planning that fits my usual meticulous and detailed holiday regime.

Boarding the flight for Langkawi, I flung myself onto the airplane with a gusto that only the overworked and under-rested can muster. Asleep with exhaustion before the flight had even taken off, my eyes opened as we glided into a lush green island.

A little later, I walked into the hotel lobby and gazed over the resting guests through the far window that framed the sea into the horizon. I was smitten.

I’ve seen beaches and coastlines before, so this in itself was not new. I had always pitied those who wasted away their days lying still by a square of water, sleeping extravagantly while their skins burnt under the sun. I had always been puzzled as to why someone would travel far away from home, only to lie down and do nothing for several days, on one chair. In my view, holidays were to be savoured to the fullest by seeing everything, talking to everyone, visiting every sight, and enjoying every cuisine. Sleeping was dispensable. I considered going on holiday just to lie down or sit still to be a debilitating malady.

As I swam in the infinity pool, its waters blurring into the distance and turning into the sea and then the horizon, I reflected on how my search for calmness had replaced the craving I had once felt to dispel quietude and embrace loud and vibrant travel experiences.

No doubt age is a factor, as is the increased intensity of work and family life, in yearning for rest and pure pleasure. I have less inclination or energy to be constantly rushing from tourist trail to tourist trail. I’ve escaped from a seven-day-a-week schedule, to realise that there is nothing lovelier than feeling sun and breeze and hearing the rustle of trees.

However, I still couldn’t lie down on a recliner by a pool for a whole day, just lying or sleeping. I need interesting and unusual activities in which to engage. I need to know that I did something new on my holiday. I need to create a bank of sustainable and substantial memories that will survive me into my older years.

And I still doubt I could spend a full week in only one resort. After just two days I was itching to see what the island had to offer.

And I know that this is the quiet period at the beach. If the resort was swarming, my holiday paradise would quickly turn nightmarish. After all, no Eden can withstand endless people with no attractions.

Given my caveats for earthly paradise, I’m already planning my next visit.