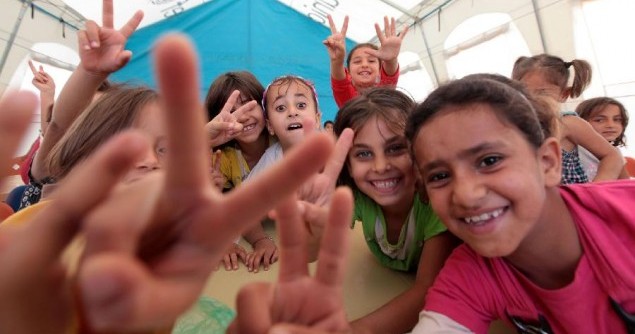 Last October 1, the school “Madrasat al-Iman al-Islamiyya” in Abu Samra in the city of Tripoli (North Lebanon) opened to “fresh off the boat” Syrian refugee kids and youth, in order to cope with the need of providing proper education in their everyday existential limbo.

The doors of this originally Lebanese Islamic school open daily to Syrian pupils from 4pm to 6pm in the afternoon, with the exception of Friday and Sunday, as established in the Tripoli district school calendar. When I visited the school on a Friday morning, the space was being used for playing volleyball and other entertainment activities were organized in class. The Back-to-School campaign has been quite large this year in Lebanon. To date, 4,942 children have been enrolled in schools, 1,650 of who are also supported by UNICEF, of a total refugee population of 162,050 individuals according to the most updated statistics provided by UNHCR.

“Soon we’re going to open new classes for high school students as well”, tells me A., administrative staff member of the school. The school director specifies that there will not be any coordination between the Syrian and the Lebanese school programme: “We made certain that, once the kids are done with their studies here and they will be able to get back to Syria in safe conditions, their certificate will be considered valid whatever the political system will be back home, with or without nizam al-Assad” (the current Syrian regime of Bashar al Assad).

The school policies, hence, purvey the underlying intention of the whole Syrian refugeehood system to get back to Syria as soon as it is feasible. “We are going to translate all books from French and English – used in the Lebanese school system – into Arabic, and it’s going to be a big job”, explains to me the director of the school, who has been in Lebanon for 31 years, unlike the newly arrived Syrian teachers and the school’s administrative staff, who make up the vast majority.

Syrians who are already established in Lebanon and have already started their own activities through a gradual self-empowerment over the years readily support the construction and provision of infrastructure and aid for their fellow country people in flight. For instance, A. has been in Tripoli for 20 years; he has dedicated a space in his textile shop for enhancing the distribution of bread and other emergency relief on a daily basis.

The director of another school that has opened the doors in Tripoli last October, thanks to the support of the Syrian National Council and a sort of informal Syrian Education committee in Lebanon, declares that they are “cleansing books from polluted historical versions and taking out images of the Assad family”. The process of redrawing Syrian history and its official factual version achieves its emotional apotheosis when, after I stepped into one of the classes and the teacher sarcastically asks them “Bedkon Assad?” (“Do you like Assad?”), seven years old students promptly shout altogether “La walla, la walla, la walla” (“Absolutely not!”).

The guaranteed official recognition of the school certificate once back in Syria, whatever the regime will be, goes far beyond the psycho-social difficulties that Syrian refugees in Lebanon have to deal with, whether they will be able to return in the short run or not. Indeed, the ideological orthodoxy that is gradually being created by Syrian opponents in Lebanon, however legitimately, risks deepening the divide between a new Official, the Political, the Power, the upwards, and, on the other hand, a new Unofficial, the downwards, the People and the Silenced.

The risk implied in the cultural internalization and consequent naturalization of what has been set up outside the country – such as the highly comprehensible categorical rejection of Assad’s regime – though in a revolutionary mood, will be tackled after the games will be played. By the same token, the implementation of such structures and the diffusion of their new “official history”, as well as the social reconciliation with the politically skeptical or the loyalist Syrians, will have to produce its new regenerating space once they will all be reabsorbed or somehow taken back into the changed Syrian social fabric.

In the highly unlikely case that Assad’s games continue though in different forms, such an emerged “humanitarian other” will just survive as a satellite that, on the one hand, will be considered incompatible, and, on the other, will chronically struggle to get recognized and institutionalized.

What can be directly observed now in the Lebanese space is that the Syrian aid providers essentially are exiled agentive citizens, who provide assistance to the fled families, that is to say to themselves too. In the bosom of the Lebanese humanitarian and associational environment, we have much more than a First Lady giving birth to NGOs close to the regime coalition, whose aim is to show democratization on the surface while controlling the burgeoning non-state opposition forces (as happened with Susan Mubarak in Egypt and Asma’ al Assad in Syria).

A huge proliferation of organisms independent from the fragile central power, which provide aid in a bid to allegedly compensate for the so-called Lebanese state weakness, more easily hide their political agenda. The absence of the state is, in turn, controversially fed by the overwhelming presence in the territory of organizations – particularly indirectly – run by political party leaders and several sons of local nepotism.

In the current Lebanese humanitarian scenario, the Syrian provision of aid is increasingly used as a strategy of the March 14 coalition to align with the Syrian opposition and, at the same time, the only way for the Syrian opposition in Lebanon to gain momentum and pave the way to future institutionalization. On this front, Bahiya al Hariri, sister of the ex Premier Rafiq al Hariri assassinated on February 14 2005 in Beirut, as already announced one year earlier, has financed the opening of other Syrian schools in Sidon, homeland of al Hariri family. Such an emergent alliance gives rise to a new wave of political contradictions in the Lebanese context, as Rafiq al Hariri, despite the vast anti-Syrian media campaign he carried out by corrupting journalists, has always been a bulwark of the Lebanese subjection to the Syrian regime, often reducing the state to a mere reflection of Assad’s coalition will.

It must be wondered how the subjectification of Syrian pupils through education and primary socialization will develop in these humanitarian circumstances and in the already ongoing effort to reconfigure Syrian history in such schools. Will room be given for individual and collective histories within what seems to emerge as a new ideological orthodoxy of an arbitrarily homogenized revolutionary stance, serving as a satellite of Syrians’ needs, and alienated on a daily basis from the Lebanese social arena? Or will the long-endured social fear of Syrians who remember the 1982 Hama massacre – expressed by the saying “the walls are listening to you” – be replaced by a new political taboo according to which it will be forbidden to rationally explore the Assad’s regime irreconcilable ambiguities?