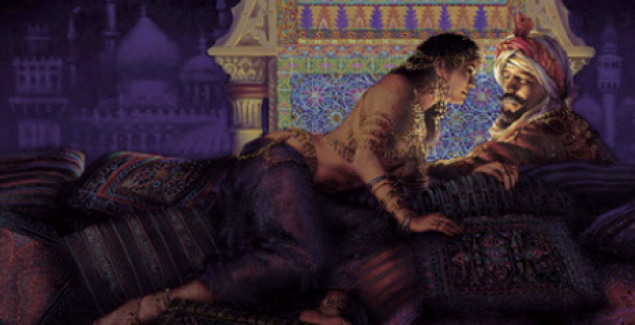 The legendary story of Scheherazade from 1,001 Nights has been redone with a surprising twist. The cast that performed this new version, Scheherazade in Baabda is special. They are the Scheherazades of Baabda women’s prison, and they have many stories to tell.

Baabda is a small prison for women in the northern suburbs of Beirut. Like other prisons in the country, it suffers from chronic neglect and overcrowding. In recent years, riots in Roumieh, the biggest prison in Lebanon, have often made headlines, but the Lebanese do not often hear about the inmates in Baabda, a much smaller institution originally built to accommodate 30 inmates, but which sometimes houses 70 or 80 women. Despite the fact that the penal system should be geared toward facilitating reintegration into society, its poor living conditions contribute to excluding its residents from society. With Scheherazade in Baabda its inmates’ voices could finally reach beyond prison walls, and help overcome distances between people.

For the Scheherazades, the empowering exercise of performing a play was an extremely rare opportunity to speak out. It was a chance to show the world who they are, what they think, and to express feelings ranging from frustration to hope and to showcase hidden talents.

Scheherazade was a captive storyteller for 1,001 nights; the comparison with the female detainees of Baabda prison ends here. While Scheherazade told tales of wonderful adventures in a beautiful fantasy world, the ladies who took the stage here have tales of a different kind: authentic life stories that invariably end up with the heroine behind bars. Their stories are ones of theft, drug trafficking and murder, stories that are unapologetic and real.

Scheherazade in Baabda was attended by government officials, members of parliament, ambassadors, the media, human rights activists and university students, as well as the inmates own family members. The performance was the result of several months of theatre workshops and writing sessions. The play was undeniably the cathartic result of that work, but perhaps the audience benefitted from it as much as the performers.

The fact that these voices were heard by an audience comprised of their fellow Lebanese is a truly great achievement in a country where public space is taken over by political leaders and their endless squabbles, and where sharp inequalities often mean that individuals from different socio-economic backgrounds might as well be living on different planets. The play, a rare glimpse into inmates’ lives through their own words, broke down social barriers. For the inmates themselves, the vast majority of whom grew up in poverty and with limited access to the arts, it was an unprecedented discovery of their own power as individuals, as well as a healing process.

The play was made possible thanks to the efforts of actress and drama-therapist Zeina Daccache, a well-known and well-loved television personality who founded the Catharsis-Lebanese Center for Drama Therapy in 2007. Many Lebanese people first heard about this NGO in 2009, when Daccache initiated a similar project in Roumieh’s prison for men, and worked with the inmates to perform an adapted and personalised version of Reginald Rose’s 12 Angry Men. This American play about a single juror going against his peers’ decision on a case was retitled 12 Angry Lebanese, and touched on themes of forgiveness, hope and self-development.

This initiative brings together people who would otherwise never hear each other’s stories. Catharsis is founded on the belief that the “incorporation of drama and expressive arts in therapy is an effective and empowering method for problem solving, promoting growth and well-being within individuals and groups; and that the arts can build bridges between cultures and different segments of society.” The centre’s mission is to offer drama therapy services to the community, including some of the most isolated and disadvantaged members of the society. They have been working in prisons since 2008, providing drama therapy even when not preparing a play.

The Scheherazades at Baabda took audiences through the absurdity of navigating the Lebanese penal system and its dire living conditions. The prisoners told their stories simply, through monologues and short scenes that they wrote themselves. They were also performers, writers and even dancers – the play also included a flamenco number.

The current living conditions in Lebanese prisons do not normally favour growth and learning. While detainees are in the custody of the state, it is initiatives by motivated individuals, such as this one, that bring hope to places like Baabda prison. And by telling their stories to the public, these Scheherazades are breaking down social barriers.

Nada Akl is a media professional and writer in Beirut