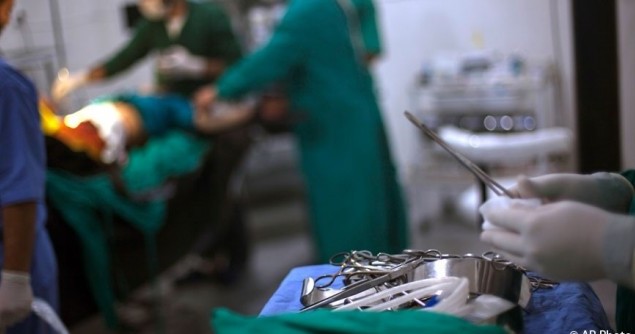 Frustrated by the news of the Syrian humanitarian crisis, Liza Hoover, a paediatric nurse from Seabrook Island, South Carolina, wanted to use her medical training to make a difference. After making a few phone calls she stumbled upon the Syrian American Medical Society (SAMS) and spent most of January volunteering at a field hospital in Northwest Syria. The experience was so fulfilling that she is going back next week.

In 2012, SAMS launched the Save Syrian Lives Campaign to provide direct medical relief to Syrians affected by the conflict regardless of political, ethnic or religious affiliation. With a network of dedicated volunteer medical personnel, SAMS has already established 11 field hospitals and supports 25 other medical centres in conflict-affected areas of Syria.

“There is a huge need in Syria for qualified medical professionals after more than 50 per cent of doctors had to leave Syria due to the conflict,” said Dr Mohammed Zaher Sahloul, president of SAMS. “We have been sending mostly Syrian American doctors, but have received many requests from other physicians who want to volunteer.”

To date, SAMS has sent more than 120 volunteer physicians to Syria, Turkey and Jordan to treat patients.

One of these physicians is Dr Joseph Byrnes, an anaesthesiologist and General Medical Officer from Shreveport, Louisiana. Byrnes wanted to spend his vacation time somewhere he could use his skills to help others in need. Within three weeks he was on his way to Syria.

Though Hoover’s and Byrnes’ respective families were concerned about them working in a war zone, it was clear this was something they really wanted to do. “The Syrians will take good care of me,” Byrne’s, on his fifth overseas deployment, reassured his family.

Hoover’s aging parents and young daughters were also worried, but she feels it will be easier the second time around.

“I was not naïve,” Hoover said. “We could hear bombs on a daily basis – sometimes in the distance and sometimes closer to where we were. But, generally I felt safe and cherished by the second family I found there.”

Hoover refers to her host family in Syria as her second family because she felt so welcomed and appreciated. Because she didn’t speak Arabic they communicated through charades, which was often comedic. “When you are appreciated, invited for coffee or meals and included in someone’s life – that’s family to me.” Hoover said.

The hospital where the two served treats anyone who walks through its door, day or night. Byrnes and Hoover attended to children and adults, many of whom had been in motor vehicle accidents or were victims of shrapnel from nearby bombings.

Though some medication and equipment was different from what they were used to in the United States, Hoover and Byrnes were impressed with how much could be done with the resources they had – especially limited power. Every ounce of petrol was used frugally in the generators.

However, Hoover worries that as temperatures rise and trash builds up, infections may spread faster. Also, without adequate power and refrigeration, vaccines and medication may go bad.

“We are working with local health authorities to address some of the public health issues and waterborne diseases,” Sahloul said. “SAMS is also providing diesel fuel to six hospitals in Aleppo in order to ensure that their power stays on.”

“Yes, I lost some weight and lived with very limited supplies,” said Hoover. “But I believe I can never repay the love and respect I received. The Syrians deserve so much more.”

“As a human being and as an American citizen, I wish the international community was doing more to help Syria. But at the same time I am humbled to watch Syrians carry on with their lives and commitment to faith while raising their children. It helps me be the best nurse I can.”

Kiran Ansari is a writer for publications including the Chicago Tribune, Daily Herald, Halal Consumer and Azizah Magazine. She lives with her husband and two children in the suburbs of Chicago.