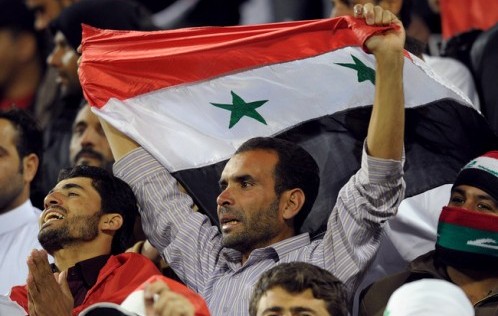 Everything goes in chalking up a victory for the embattled regime of Syrian President Bashar al-Assad, whether it is on Syrian streets or on soccer pitches.

The Syrian military brutally battles anti-government demonstrators on the streets of the country’s cities in a bid to suppress eight months of mass protests in violation of Mr. Assad’s agreement with the Arab League to seek a negotiated solution.

Similarly, Syria’s national soccer teams flagrantly set rules aside in their line-ups to ensure success on the pitch in a bid to demonstrate that Mr. Assad’s regime is in control and can perform despite the violence and turmoil.

In the latest incident, Lebanon has accused Syria of fielding six players in an Under-19 Asian Football Championship qualifier whose ages had been falsified to qualify them for the team.

The incident comes two months after world soccer body FIFA barred Syria from competing for the 2014 World Cup in Brazil after the country’s national team fielded an unnamed ineligible player in in a qualifying match against Tajikistan.

The ineligible player was fielded in both legs of Syria’s Asian qualifying second round tie against Tajikistan on July 23 and 28. FIFA ordered that Syria be registered as having lost each match 3:0 to Tajikistan despite Syria having won them on the pitch on a 6:1 aggregate.

Lebanon Under-19 manager Samir Saad accused Syria, according to press reports, of fielding six players registered with the same date of birth, as well as former youth team players registered under different names and dates of birth, at the recent qualifiers in Fujairah, UAE, in which Syria beat Lebanon with a whopping 6:0.

He said the six players had all given January 1, 1993 as their birthdate. Only players born on that date or before qualify for the 2012 Under-19 AFC tournament. Lebanese Football Association executives said that it was impossible that half of the Syrian squad had been born on the same date.

Mr. Saad said Lebanon had filed a handwritten complaint to the Asian Football Confederation (AFC) accusing Syria of forgery immediately after the match.

“We presented our complaint, according to Article 63 of the Asian Football Confederation regulations relating to protests, where the time limit is fixed to the two hours following the match,” Mr. Saad told the Lebanese paper Al-Akhbar.

AFC regulations require that complaints about a match be filed in hand writing immediately after a match and that a registered letter be sent to the soccer body within two days of the game.

Syria’s governing football body populated by Assad appointees has denied the allegations, determined to preserve the Syrian team’s record so far of having all four of its qualifiers in the tournament. Former Syrian Football Association Marwan Arafat said the eligibility of the Syrian players was “incontestable.”

Syria’s youth team coach, Hassam al-Sayed, accused Mr. Saad of fabricating the claim to distract attention from his team’s poor performance. Mr. Saad “invented the story to shift the focus of the Lebanese media from the severe defeat onto complaints about the age of our players,” Syria’s official Syrian News Agency quoted Mr. Sayed as saying.

Syrian security forces in August reportedly arrested national soccer goalkeeper Mosab Balhous on charges of sheltering armed gangs and possessing suspicious amounts of money. In a YouTube video, Mr. Balhos’ colleague, Abd Albasit Al Sarut, goalkeeper of the Syrian U-23 men’s national team, said Mr. Bahous had been accused of participating in anti-government protests and wanting to establish an Islamic emirate in the city of Homs.

In an earlier video on YouTube, Mr. Sarut asserted that the Syrian regime was levelling similar accusations against him, charging that he was a Salafi, a fundamentalist who seeks to emulate life as it was in the time of the Prophet Mohammed, and was seeking to turn Syria into a Salafi state.

“This accusation was made when we took to the streets, demanding freedom for the Syrian people. I am now wanted by the security agencies, which are trying to arrest me. I declare, in sound mind and of my own volition, that we, the free Syrian people, will not back down until our one and only demand is met: the toppling of the regime. We are not Salafis, and there is no truth to the regime’s claims about armed groups or a Salafi emirate,” Mr. Sarut said.