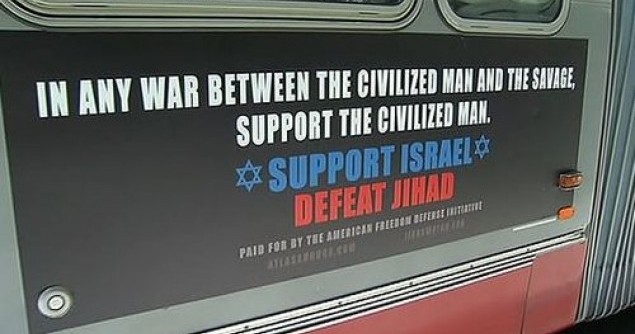 I tried hard to stay away from the controversy surrounding the YouTube trailer for the movie “Innocence of Muslims” insulting to Prophet Muhammad (PBUH) and triggering waves of violent protests in the Muslim world, often incited by fundamentalist regimes such as Iran’s.

And what vindicated my thinking was a Tweet I read this morning by Nadine Toukan (@nadinetukan). It said: “The biggest insult to Islam is calling a piece of utter rubbish an anti-Islam film. Stop injecting the kool-aid intravenously.”

The advertisement will read:

I deem the ad offensive. Although I do not call for censoring it, I am offended because I know, First Amendment notwithstanding, it would never have passed scrutiny or been allowed had it called Israel “savage.”

The disclosures were made on Monday and Tuesday by Mother Jones, which published exclusive video footage of Romney speaking to donors at a May 17 fundraiser.

Among other dreadful clips, Romney is seen responding to a question about the “Palestine problem.” Romney pontificated that peace in the Middle East is not possible and a Palestinian state is not feasible, telling donors Palestinians have “no interest whatsoever in establishing peace and that the pathway to peace is almost unthinkable to accomplish.” Mother Jones also published a full transcript of the Romney secret video today, Wednesday that you can read here.

I don’t know whether to laugh or cry, but all this brought to my mind former President George Bush’s famous 2001 catchphrase, “Why do they hate us?”

After rejecting the ads initially, then losing a federal court ruling on First Amendment grounds, the Metropolitan Transportation Authority said on Tuesday that the ads were expected to appear next week at 10 subway stations.

“Our hands are tied,” Aaron Donovan, a spokesman for the authority, said when asked about the timing of the ad…

Pamela Geller, the executive director of the American Freedom Defense Initiative, said in an e-mail Tuesday that transit officials in Washington were “kowtowing to the threat of jihad terrorism.” She added that recent events in the Middle East had not given her pause “for a second” about posting the ads in New York.

“I will never cower before violent intimidation, and stop telling the truth because doing so is dangerous,” she said. “Freedom must be vigorously defended.”

She added, “If someone commits violence, it is his responsibility and no one else’s.”

The transportation authority has said it did not try to block these ads because they did not meet the agency’s threshold for “demeaning” language, as the ad referring to a “savage” had.

Muneer Awad, the executive director of the New York chapter of the Council on American-Islamic Relations, said the ads were an attempt to “define Muslims” through hate speech.

“We’re encouraging American Muslims to go out there and define themselves,” he said.

Mr. Awad said the group had not called for the ads’ removal, though it has asked the transportation authority to redirect funds it receives for the ads to the city’s Human Rights Commission.

“It’s perfectly legal to be a bigot and to be a racist,” he said. “We want to make sure there’s a counter-voice.”

3 Responses to Subway Ad: So Who’s ‘Civilised’ and Who’s ‘Savage’?