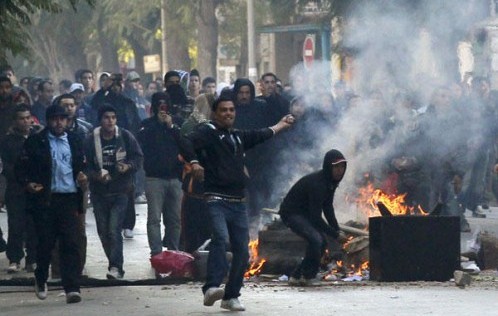 Published in April 2010, many people have come across this book on Tunisia unerringly failing to discern the way things would go. The Arabist has highlighted perhaps the worst paragraph, its final conclusion:

Authoritarianism in Tunisia could prove to be very durable, and not simply because the government represses opponents. A majority of Tunisians may determine that the benefits of the status quo outweigh the individual and collective costs that a transition would require them to pay. In fact, the country’s history and its current balance of political forces make this the safer bet over the medium term. It does seem clear, though, that political change in Tunisia will not come about through some dramatic event that suddenly replaces the existing order with a new one. The stability–reform dialectic

Not for one second do I write this to sneer at this author. I would imagine that his book is fairly well grounded in history and approximated the best that social scientific predictive powers could do (can you tell which side of the Soc Soc/US v UK debate I am on?). But things happen, some of which simply defy prediction.

Similarly, I find myself defending the likes of David Held. While I don’t know the in-depth bits and pieces of the case, I don’t find the notion that Saif al-Islam Qaddafi was always a despot bursting to get out and Held was a fool for being fooled particularly persuasive. Yes, there were a number of pointers that Saif was not a nice piece of work (to say the least) and for this reason alone, perhaps Held ought not have interacted with him. This, however, is a different question.

Specifically on the notion that Saif was ‘always’ likely to become some blood-thirsty dictator or some such notion, I’m not sold. I don’t think that it takes much imagination to foresee – minus the Arab Spring (!) – Saif eventually taking over from his delusional, vicious father and leading Libya on something of a more normal path (note I don’t say that he’d be a paragon of virtue and democracy).