Street Art In Yemen: A Channel for Protest 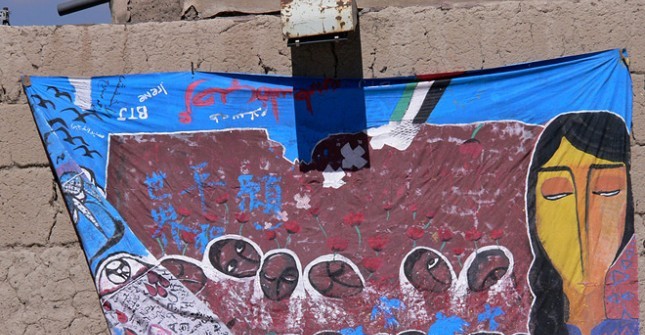 In January 2011, demonstrations inspired by the contentious mobilizations taking place in Tunisia and Egypt started to be carried out in Yemen. Gradually, anti-governmental demonstrators came to modify old repertoires of contention, such as the demonstration or the sit-in, into what became a permanent camp and a new space of contention in Sana’a named “Change Square.”

Among the self-proclaimed “revolutionary youth” of a sit-in that lasted until April 2013 were a number of visual artists. Their presence in the Square contributed in giving political demands an artistic expression, alongside using artistic practices as a means of contention. Contributing to the symbolic aspects of this mobilization, artistic practices developed inside and outside the tents. As a continuation of street politics acquired in the Square, certain visual artists incorporated dissent, transgression, and civil disobedience in their artistic practices.

Among such cases, street art techniques such as graffiti, free writing, mural painting or stenciling participated throughout 2011 in reproducing political slogans that aimed to overthrow Ali Abd Allah Saleh’s regime.

In 2012 this contentious street art underwent certain changes. Such is the case of the painter Murad Subay who carried out the largest project of street art ever undertaken in Yemen and probably in the region. Sending a call through Facebook, he started a project that aimed to “color the walls” of bullet-marked spaces where violent confrontations took place between pacifist demonstrators and forces loyal to the regime.

Encouraged by large public participation and media coverage, he undertook two other street art projects where a contentious discourse became more evident. Through photographs wheat-pasted and stenciling, he came to use the walls to express solidarity and dissent and to claim political demands. This case serves to explore the implications of direct, political participation as well as civil disobedience learnt under the tents and expressed through an artistic practice that uses both walls and streets as canvases and exhibition spaces.

Changes in the art worlds through street art campaigns

Several techniques nowadays considered central to the practice of street art have been used over the years in Yemeni cities, aiming at reproducing political and religious messages. In 2012 changes occurred in the street art scene as the country also entered a new phase following the Gulf agreement that established the terms of a negotiated transition where Saleh obtained immunity and the “revolutionary youth” was excluded. In terms of street art, new experiences emerged.

The city’s aesthetic and not only the surroundings of Change Square were drastically changed when kilometers of walls were covered by paintings. Most importantly, public space was again being used to express dissent and make social critiques, this time through painting in a collective manner. The practice of street art was thus being transformed, singularly triggered by campaigns launched by a painter in his twenties, Murad Subay. Being among the youth that initiated the sit-in in Sana’a, he started this project by reproducing some of his own canvases on the city’s walls.

This initiative rapidly grew into a collective action where people took over the streets, combining artistic knowledge with amateur will of expression. The final result were walls covered by abstract images and also by messages of social and political critique like unemployment, resistance, violence, freedom, poverty, and nationalistic discourses.