‘The Square’: A Compelling View of Egypt’s Revolution 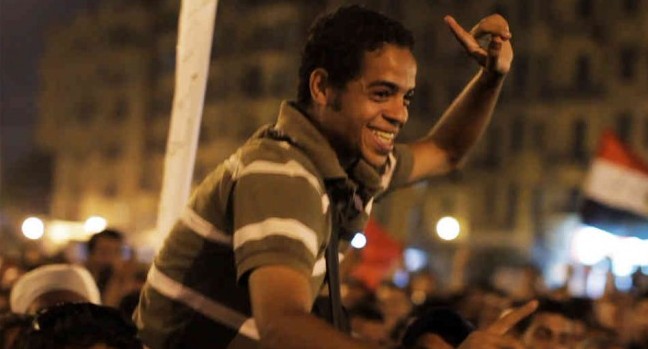 The Square is a beautifully crafted chronicle of Egypt’s ongoing revolution that, from beginning to end, manages to inspire, dispirit, and then fill your heart with a renewed sense of hope. I know others will be reviewing this film in the weeks and months to come as it (hopefully) gains momentum, but I wanted to talk about it from what is perhaps a personal perspective; as a young Arab who felt, as many did, connected to something greater on that day in February when Mubarak stepped down. Because sometimes you watch a film, especially a documentary, and you can’t help but connect it to a personal context, to find out where it fits in your viewing of history.

On January 31st, a week after the sit-in in Cairo’s Tahrir Square began, my mother passed away after a long battle with cancer. In her hospital ward at the Jordan University Hospital, I can remember how all the TVs were tuned to Al Jazeera as it broadcasted the beginning of all this. Now Jordanian funerals are typically forums for social chatter, designed to tactfully distract a family in mourning, so politics is always a convenient conversational tool to that end. And naturally, Egypt was all anyone could talk about. Many Jordanians had already taken to the streets and their protests translated in to a quick changing of the government. But uncertainty plagued everything, and it felt like everyone in Jordan seemed more concerned with Egypt, putting down bets on what would happen next. Egypt was monumental in our minds. There was that subtle, conventional recognition that the way Egypt goes, so goes the rest of the region. I’m not sure how much of that is true any more.

But then came that moment, which I can only describe as the closest thing to the moon-landing my generation of 20-something year old Arabs had ever witnessed. Mubarak’s speech was a mass event. His words embossed with defiance while the other half of the screen – the Square – roared in anger. And what a roar that was. It rendered that speech his final one. Personally, it was the strangest few days and weeks of my life; a potent mix of personal melancholy, and Egypt providing the only glimpse of a light at the end of that dark, dark tunnel. It was a tremendous moment, reality-altering even – when you see millions of people your age stream in to a public square and try to take back what’s rightfully theirs, realizing their own sense of collective power – that’s Neo choosing to take the red pill in The Matrix. It is a moment that caused a permanent mental shift; a new realization of the limits of possibility. That was the moment that, for better or worse, I think made most of us realize that something had been unleashed that couldn’t be put back in the box.

Everyone will see this film from a different vantage point, from a different memory of the revolution’s place in their view of history, but this was the personal context in which I saw it. Not only was the film a retrospective of a revolution, but also of a moment that showed there could be light in the darkest of days.

But when it comes to the historical telling of this moment, and every moment it has inspired since, revolutions can be a tricky thing to capture. In the middle of it all, the scene can get so drenched in the fog of American-made tear gas that it becomes difficult to find the revolutionary amongst the maddening crowd of louder voices. And while the proverbial waters of Tahrir Square became muddied in the weeks and months that followed Mubarak’s downfall, what director Jehane Noujaim and her team masterfully accomplish is to steady our eyes on the revolutionaries in the crowd. But who are the “revolutionaries”? How does one define them?

The film looks at several key characters, and tells the story mostly from their perspective. They are presented collectively as misfits who were there in the beginning and who ended up caught in a riptide full of religious zealots, Mubarak’s regime, and the security state. While they help weave together the varying pieces of political contestations in Tahrir Square, they are not necessarily in ideological agreement with one another. What they have in common is a kindred spirit that shares one essential belief: that Egypt should be ruled by the people. The film brings the backdrop of Tahrir square to the forefront, and in center stage, it follows these revolutionaries who come from different walks of Egyptian life. It shows you the moments that brought them together and the moments that threatened to tear them apart. It shows you their moments of optimism, their evolving concerns and worries, and most importantly, the film shares with us their sense of persistence.

There’s the young Egyptian-British actor Khalid Abdallah, who notably returned to Egypt when the revolution began and started documenting an unfolding history that would serve as the foundation for the non-profit YouTube channel, the Mosireen Collective. There’s Magdy Ashour, a member of the Muslim Brotherhood but whose beliefs regarding the organization are put through the ringer when their political maneuverings play out during the revolution. Aida, a young, articulate woman with hipster glasses chanting on the front lines. Ramy Essam, who, with his guitar, provided the soundtrack of the revolution. And finally Ahmad – the storyteller.

Of all the characters, it is Ahmad who represents the warmth of that uprising, and what we see is a young man who is filled to the brim with political convictions and ideas about justice, equality, democracy, and representation. He wants a better country and like many of his peers, he decides the square will be his stage.

There is perhaps no better character to represent the idealism of that moment in history; no character that captures it so well more than Ahmad. When Mubarak steps down, it is Ahmad’s face that we see lighting up on the screen, filled with that indescribable joy and reminding us what that moment felt like back then, especially for young Arab viewers watching what felt like an impossibility unfold on their screens. It was a moment of sheer potential and opportunity. And when things turn to shit, we see those moments on Ahmad’s face as well. We see this young man whose convictions are being shaped by the Square, growing increasingly frustrated, angry, and depressed – just like many, if not most of us in the region.

Ahmad is funny, serious, smart, and a charismatic orator by any measure, reminding us of the charm and wit that the best of Egypt is known for. In that way, he provides our most important emotional connection to the events that shape the film. He is the narrator – and perhaps of more than just the film. There’s a poet in him and often times, you have to catch his spirited metaphors. When the military begins its beatings of protesters, running them down with trucks, Ahmed is filmed walking down the middle of an empty street, describing to the camera his disappointment in the country’s political ideologues as random cars swerve around him

By focusing on the revolutionaries, the film does seem to take a position, and while it doesn’t look to hide that, it largely ignores other stories in its wake. We don’t really get a sense of what the Muslim Brotherhood really thinks aside from the film’s token Brotherhood member Magdy, who is presented as someone forced to question the actions of the organization he is loyal to. We don’t really get a sense of the military’s thinking either, aside from General Bakhit, who is a military spokesperson and offers the typical responses of someone in that position. However, at one point, a Major Haytham who is seen driving the filmmakers around, delivers one of the film’s most frightening lines when asked if he felt the military had protected the revolution. “We didn’t protect the revolution, we made it happen,” he scoffs. “You kids don’t know anything.”

What this film offers non-Arab audiences is perhaps its greatest value. It puts on full display the wide spectrum of political beliefs held by average Egyptians that took to Tahrir Square over the past three years to express those beliefs. Western discourse tends to be dominated by breaking down that rainbow spectrum in to black and white, suitable for domestic audience consumption. But in The Square, you not only see all these views presented, but you see them colliding and interacting with one another. You see them playing out physically on the street; in the square.

In one scene, Magdy, is questioned by a random girl about the Muslim Brotherhood’s support of the military council, which was viewed as a betrayal by the revolutionaries. Magdy promptly lifts up his pant leg to shows her his wounds, indicating how he had sided with the revolution. When she tells him many others had also been beaten, he says: “No, not beaten. We’ve spent our lives in prison cells.” Moments later, a random man appears and a small crowd forms. “The Muslim Brotherhood has damaged the image of Islam,” he tells Magdy. “I am embarrassed of being a Muslim because of you.”

But even when the film strays from its central characters, there are always others to articulate the feelings and thoughts of the revolutionaries. They are sprinkled throughout the film, seen questioning authority in hospital wards where autopsies are denied, or in interviews with state spokespeople, or on the streets as they argue face-to-face with soldiers.

I cannot imagine the extensive work that went in to making this, especially from editor Pedro Kos who went through hundreds of hours of footage. I have an appreciation for it, and hope it pays off at this year’s Oscars. But regardless of cinematic accolades, this is a wondrous piece of visual history that was stunningly shot and deserves to be seen by both Arabs and the non-Arab audience it was intended for. The film’s original ending stopped at the election that put Morsi in power, but the story of the Square still had another chapter to write as we saw last summer with his ousting. The Square is an unfinished story about an unfinished revolution. But really, the final scenes and lines of the film (which I won’t spoil) remind us what the revolution’s most significant accomplishment was, and reminds us that it was an accomplishment paid for in blood.