‘Speaker’s Corner in the Gulf?’: No Chance! 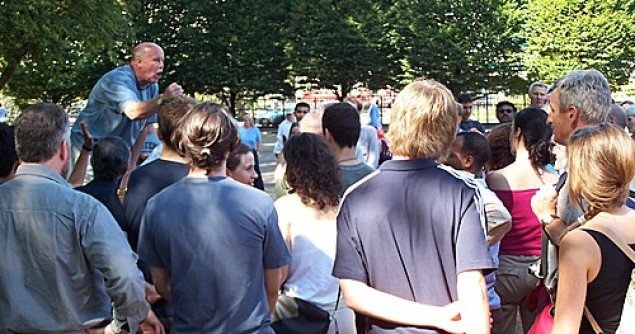 One British tradition unlikely to be imported by the Gulf states any time soon is Speakers Corner, in Hyde Park, where anyone can stand up, announce the end of the world, warn us about alien abductions or cast derision upon the nation’s political leaders.

I’ve been writing a fair amount lately freedom of expression, and especially about the implication of the Leveson Report in the UK. This was the result of a judicial inquiry into abuses of privacy by the British press, and in particularly the illegal hacking of mobile phone voicemail. Leveson has stirred up a big debate on the role of the state in regulating the media.

The BBC’s Bill Law has written an interesting article that provides a stark contrast to the somewhat theoretical concerns about threats to freedom of expression in the UK post-Leveson. He describes “… the increasing tendency of the Gulf States to take draconian action against bloggers and tweeters who do not show respect for the state and its institutions as exemplified by a recent measure in the United Arab Emirates”.

The amendments to the UAE’s existing law on internet crime were announced last month in a decree by President Sheikh Khalifa bin Zayed al-Nuhayyan, the ruler of Abu Dhabi.

It says citizens who create or run a website or use the internet to deride or damage the state or its institutions face up to three years in prison. Foreign nationals will be deported.

The institutions include the president, vice-president, any of the rulers of the federation’s seven emirates, their crown princes and deputy rulers, as well as the national flag, national anthem, or any symbols of the state.

The law also prohibits “information, news, caricatures or any other kind of pictures” that authorities believe could threaten security or “public order”.

He goes on to look at the other side of the coin – the explosive growth of the social media in Saudi Arabia, and its role in promoting social change. Even if he hadn’t quoted me in the bit about Saudi Arabia, I would still commend Bill Law’s article as a balanced view of the pitfalls of being an online activist in the Middle East, as well as changes in mindset that the social media is bringing about.

For someone like me who is not a journalist or a citizen of the country in which I am a resident, writing a blog about the region does imply certain risks. While I steer clear of the kind of red lines Sheikh Khalifa has unequivocally put in place, I can never be certain that something I write might give offence where none was intended. If I criticise, I try and frame it in a constructive spirit. And so far, there have been no knocks on the door, though one or two supporters of Binyamin Netanyahu were less than happy with some of the stuff I have written about Palestine.

Being relatively careful about what one writes and says in the Middle East becomes an engrained habit after a while, partly through recognition of the fact that one is a guest in the country in which one resides, and partly because apoplectic prose is bad for the blood pressure. It will be interesting to return to the UK, where public expression is somewhat more robust. It will probably take me a little while to get out of the habit of watching and listening before I speak.