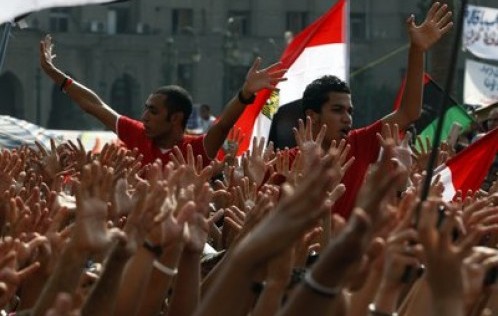 Egyptian Football Association (EFA) president Samir Zaher has hinted that Egypt may for the second time this year postpone or suspend professional soccer league matches because of the political unrest in the country and the role of militant soccer fans in clashes with security forces.

Mr. Zaher’s suggestions came on the third day of mass demonstrations in Cairo and other Egyptian cities calling for an end to military rule. The protests that escalated into fighting on Cairo’s Tahrir Square as well as in the Mediterranean port city of Alexandria, in which at least 11 people were killed and hundreds of others wounded are in demand of an end to military rule.

Many Egyptians fear that the military that took over in February from ousted President Hosni Mubarak with a pledge to lead the country to democracy within six months is determined to hold on to power with a democratic façade on which they can impose their will.

Highly politicized, militant, street-battle hardened soccer fans joined the protests in Cairo late on Saturday forcing police and units of the paramilitary Central Security Force to initially retreat in a replay of demonstrations early this year that forced Mr. Mubarak to resign in which the soccer fans or ultras played a key role. The EFA at the time suspended professional soccer for a period of three months in a bid to prevent the soccer pitch from becoming an opposition rallying point.

Military police using tear gas and rubber bullets Sunday evacuated briefly evacuated Tahrir Square pushing protesters into a warren of nearby streets and alleys but the protesters led by the fans or ultras – militant soccer fan groups modelled on similar organizations in Italy and Serbia –- retook it later in the evening. Protesters and security forces clashed again on Monday.

Mr. Zaher said the EFA would meet with representatives of the military-appointed government to discuss next month’s scheduled resumption of Premier League matches. Egypt launches on November 28 a phased parliamentary election that will last in to January. Many fear that the clashes on Tahrir Square are a forewarning of violence that could occur in the election period, the first polling since Mr. Mubarak’s downfall.

“Egypt is going through a critical phase that could have an impact on the future of football in the country. As a football official, I am urging all those who are involved in the game in Egypt to unite for the sake of keeping the sport alive. We will be calling for a meeting involving club officials and higher authorities in order to discuss the current situation and plan for the future of Egyptian football,” Mr. Zaher told a press conference in Cairo.

There is little chance that the ultras will heed Mr. Zaher’s call. The ultras view Mr. Zaher as a corrupt remnant of the Mubarak regime and have repeatedly demanded his resignation.

Militant supporters of crowned Cairo club Al Ahly unfurled a huge banner denouncing the EFA as thieves and taunting the EFA and Mr. Zaher as remnants of the corrupt Mubarak regime at a premier league match earlier this month. Amid a flurry of fireworks, the fans also took the media to task for supporting government efforts to curb their militant ways of cheering their team with fireworks, flares, smoke guns and loud chanting.

In response, Mr. Zaher warned that the disturbances caused by the militants could lead to a suspension or cancellation of the current premier league season. The EFA recently ordered Al Ahly and its arch rival Al Zamalek to play two home matches behind closed doors because of militant fan conduct.

The EFA has been trying unsuccessfully for some time to curb politically motivated militant soccer fan activism that since early September resulted in repeated clashes with security forces in which more than 150 people have been wounded as well as the fans participating in the storming of the Israeli embassy in Cairo in which three people died and some 1,200 others were wounded.

Fourteen soccer fans are standing trial in two different cases for the riots. The courts are scheduled to issue verdicts by the end of the month.

In response to the EFA measures, fans of Al Ahly arch Cairo rival Zamalek invaded earlier this month Cairo Stadium during their teams match against Ittihad al-Shorta, the premier league team owned by the police. Dozens were arrested in clashes with security forces. Local TV channels broadcast images of riot police armed with batons carrying a limp body up the stairs of the stadium.

“It is very difficult to continue playing amid these troubles. We tried to prevent riots, but supporters considered the punishments provocative. What Zamalek supporters did is a violation of all rules. Where is the security necessary to continue the league?” Mr. Zaher said at the time on Egyptian TV.

In a statement, the Ultras White Knights (UWK), the militant Zamalek support group responded to Mr. Zaher, saying that “these people are remnants of the former regime. They will not determine our destiny. We suffered a lot from injustice and repression in the past, but we stood up to that with pride. We fought with all our might to maintain our principles and freedom. We thought justice and freedom would come after our revolution. We will continue in our defence of freedom even with our blood. Our war with the EFA will continue until we win and see the corrupt people in prison.”

That war has now taken on bigger dimensions. Mr. Zaher’s suggestion that the premier league could be postponed or suspended will fuel militant soccer fan convictions that the EFA president is a stooge of the former regime its military successors. Increasingly, the militants believe that it will take putting an end to military rule to clean up Egyptian soccer.