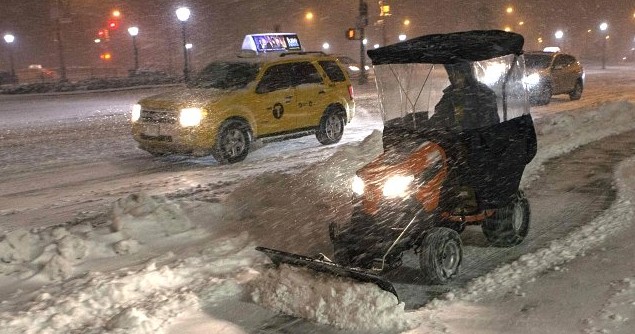 As a massive storm dropped at least two feet of snow on northeast US on Saturday, Saudi university students scrambled to stock up with food, stay indoors and prepare for the possibility of losing power.

Yet some Saudi students were so enamored with their first experience in the snow, they didn’t heed warnings from local law authorities to stay inside.

“Some Saudi students, stupidly, were too excited of seeing the snow for the first time and went out playing and taking pictures despite the local authorities warning against going out,” said Howiyda Alyebaawi, 21, of Madinah and studying English in Boston. “They were so excited to post pictures, but it is a very serious condition.”

The storm walloped Massachusetts and Connecticut with winds up to 82 mph. More than 650,000 homes and business lost power. Boston had 22 inches of snow late on Saturday.

“The situation is very complicated and hard to deal with for Americans in general, speak not for people coming from a hot country,” Alyebaawi said. “We have never experienced such weather, nor do we really know how to deal with it.”
Alyebaawi said Massachusetts authorities sent an automated telephone message advising residents to stay indoors and stock up on food, water, batteries, medication and first aid kits. The Saudi cultural attaché sent an e-mail in Arabic.
“We were not very happy about receiving the e-mail because not all students are keen to check their e-mails every day, and if they didn’t understand the automated message in English, there could have been problems,” Alyebaawi said.
She added: “I wish we received a call from the cultural attaché. We understand they can’t call everybody, but at least the ones in Boston, who are hardest hit.”

English language student Abdullah Jawhar, 37, of Jeddah and who lives in the Boston suburb of Chelsea, said it is difficult for most students to take public transportation from the outskirts of Boston to the city center.

He noted that the storm hit just when his monthly allowance arrived. “We just got paid, so we stocked up well. If the storm came at the end of the month, we would be in trouble.”