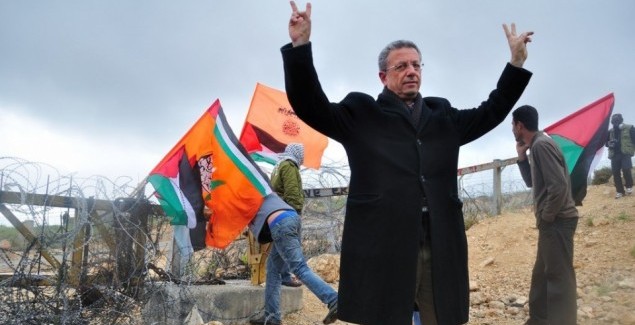 No matter where, how or by whom a peaceful solution to the Israeli-Palestinian conflict is arrived at, it will not only be the result of high-level, closed-door negotiations. While the final signatures and handshakes will be made by leaders on both sides, it will be the “street” and the people that win the peace. I believe that only a peaceful, organized and committed nonviolent movement can change the balance of power in Palestinian favor, from one of military calculation to one based on human rights and the moral high ground.

Accepting nonviolent resistance as a way of ending the occupation is more than a short-term political calculation born of the failure of violence. It is also more than the long-term political understanding that a peace that is forged by peaceful means will be enduring, productive and mutually beneficial. Nonviolence is a way of life and an ideology that extends beyond weekly popular protests against Israel. It is a way of thinking, acting and reflecting that enters into our daily lives, homes, places of work, classrooms and municipalities. Nonviolence, as embodied in our civil society, is not only a means to our liberation from Israel, it is our means of building a civil and democratic Palestinian state that respects and upholds the civil and human rights of its citizens.

While the international community has failed to pay attention, the third Palestinian intifada (Arabic for ‘shaking off’) began in the middle of the last decade – before the second one even ended. Much like the first intifada, today’s is not led by the government or any one figure.  And it is  characterized by volunteerism and nonviolence. Unlike the first intifada, however, this new movement for freedom and justice has not garnered much in the way of international attention.

Weekly popular protests against the Wall and occupation have been ongoing since 2002. Week after week in villages like Bil’in, Nihlin, and Budrus, and in smaller neighborhoods in cities like East Jerusalem and Khalil (Hebron), protesters have marched. They are no longer armed with a rifle and an olive branch, but only an olive branch and their dignity. Dozens have been killed and thousands have been injured and/or arrested. They will march again and again and again until a just end is achieved by just means. Or will they?

Every day in our universities and libraries we can find stories about the success of nonviolence and the virtues of the cause. From Gandhi to Martin Luther King, Jr., we have been told about the victories and how they have come from the capacity to force the oppressor to look in the mirror – how not to destroy an enemy, but to transform them into an ally.

The last week has seen a number of nonviolent actions all over the occupied territories in solidarity with the thousands of Palestinians who declared a hunger strike (one of the most nonviolent forms of human resistance).

The success of nonviolence will not be secured unless something begins to change on the ground in Israel and Palestine. How long will Palestinians march into gas, malodorous skunk spray, sonic screams and death before the hope and dreams of the promise of nonviolence is choked to death? How long will Palestinians struggle against not only the Israeli military, but also the violence committed by their undercover agents, settlers and provocateurs? Finally, how long can Palestinian civil society and our allies wage peace – with scant attention from the international media – against an increasingly sophisticated and cruel occupation?

Nonviolence, like any other belief or goal, must be nurtured by a hope in a better tomorrow. This hope serves as an armor that, while offering us scant physical protection, provides us with the courage to continue to face such overwhelming odds. Day after day and week after week, Palestinians have been doing their part to bring about a nonviolent resolution to the conflict.

The historic hunger strike should serve as a wake-up call to Palestinians, Israelis and the international community as a whole. Whatever happens going forward, one thing is for certain: We must not accept to be slaves to occupation, Apartheid, oppression and internal divisions. We must move forward and never let our hopes for peace and justice die.

One Response to ‘Slaves to Occupation? No!’: ‘Non-Violence? Yes.’