Shopping in The Kingdom: Hell Just Got Warmer 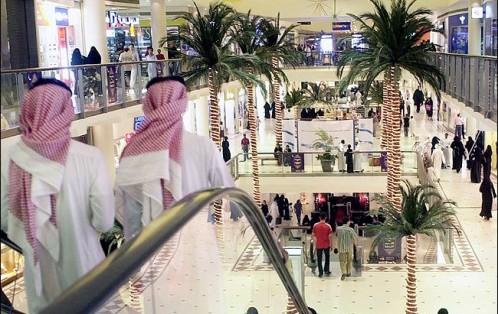 I’ve written about it before, but I really hate shopping in Saudi Arabia. Despite the fact that the countless sparkling new shopping malls are beautiful and amazing, and irregardless of the sad truth that because of cultural restrictions there is just not much else to do in the way of activities for women in Saudi Arabia besides shop, shopping in Saudi Arabia is not something I have ever really enjoyed – and it’s just gotten a whole lot worse.

The large Middle Eastern retail conglomerate, M. H. Alshaya, has enraged customers with a new policy that does not allow refunds for returned merchandise – only store credits will be offered.

The big unique problem in Saudi Arabia with this policy is that most clothing stores in the country do not provide dressing rooms for women to try on clothing before purchasing it. Why? Because they are illegal! Since most sales positions in KSA are jobs almost exclusively limited to men, even in women’s clothing and lingerie stores, there are just too many wild X-rated possibilities that could conceivably happen in these changing rooms. So the imaginative Saudi religious clerics have deemed these convenient little necessities as totally immoral dens of filthy lust. Their answer is to deprive women in Saudi Arabia the ability to actually try on clothing first before buying it, preventing sexual attacks on women in various stages of undress in retail changing rooms.

Many stores have routinely imposed a strict return policy in the past, limiting the time frame for a return to three days. Imagine the problems this creates for women in Saudi Arabia who cannot drive and do not have drivers at their disposal to run them back to the store to return an item that doesn’t fit. It’s more than just a hassle.

Across the Middle East, Alshaya controls over 55 different retail chains, managing more than 2,000 franchises in 15 countries.