Shia vs Sunni: Lessons From The “Peace of Exhaustion” 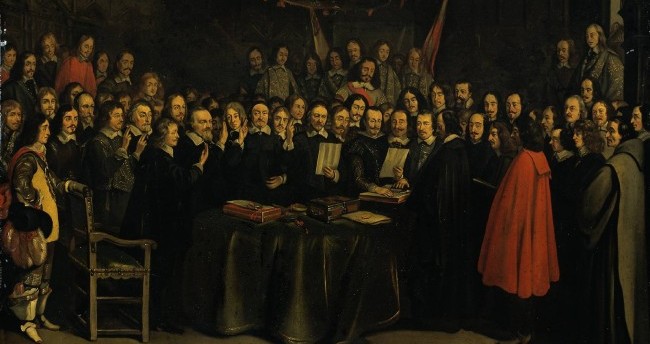 Today, it’s undeniable that the Middle East is seeing a period of rising sectarian violence between Sunnis and Shi’as, especially in Egypt, Syria, Iraq and Lebanon. On 20 August, King Abdullah II of Jordan addressed Sunni and Shi’a religious leaders at a Royal Aal al-Bayt Institute for Islamic Thought conference, speaking about the “danger of manipulating religion for political purposes and sowing the seeds of hateful ethnic and intra-religious sectarian division.”

Historically, the region has not suffered from the gross religious and denominational intolerance that was seen in Europe between Catholics and Protestants, especially in the 1500s and 1600s. In Europe, the way out was the series of peace treaties that comprised the Peace of Westphalia in 1648, referred to by some contemporaries as the “Peace of Exhaustion”.

Perhaps the Middle East need not exhaust itself with war to realise that good Sunni-Shi’a relations are the key to regional and global stability. Lessons of Westphalia could be applied to the Middle East today.

Europe fought a decades-long war to realise that the way forward is religious and political tolerance based on mutual respect for the shared right for different nations and religions to exist without interference. Maybe not with love, but Europe has finally learnt how to respect unity in diversity of both religious beliefs and political opinions, beginning with Westphalia.

The Middle East, in fact, possesses historical precedent for mutual respect between Sunnis and Shi’as, as well as adherents to other schools of religious thought.

The fact that today’s main centre of Sunni learning, Al-Azhar University in Cairo, was founded in 970 by the ruler of the Shi’a Fatimid Dynasty tells us more than anything else that Sunni-Shi’a cohabitation has been a matter of historical routine and a common way of Muslim life.

Thus, it should not be a surprise that the prominent Sunni authority of Al-Azhar, the late Sheikh Mahmoud Shaltut, issued a fatwa (a nonbinding religious legal opinion) in 1958 declaring the Shi’a Jafari school of theology legitimate under Islam. That similarly helped in establishing the Council for the Rapprochement of Islamic Theological Schools at the time.

Furthermore, a good personal and scholarly relationship between Sheikh Shaltut of Al-Azhar and Ayatollah Muhammad Taghi Ghomi of Iran during the 1960s still serves as an exemplary point of meeting between the two schools of Islam.

On the occasion of the launch of their initiative in Cairo to bring Sunnis and Shi’a together, Sheikh Shaltut said, “Here we are the Egyptians, Iranians, Lebanese, Iraqis, Pakistanis and others from the Muslim world; and here we are the Sunnis of Hanafi, Maliki, Shafi’i and Hanbali schools together with the Shi’as of Imami and Zaydi schools sitting at one table where you hear echoes of sound knowledge of literal, spiritual and legal wit in the spirit of brotherhood.”

Ayatollah Ghomi echoed him, acknowledging, “Sunni and Shi’a scholars are sitting at one table …in search of a recovery from a disease of sectarian division on the ground of the guidance of Islam and its principles, and thus by their knowledge they made this epoch one of many glorious Islamic epochs.”

A famous Hadith of the Prophet Muhammad says, “Allah will send for the Muslim community, on the eve of each century, someone who will renew its genuine faith.” When we read this, we cannot but think that it’s time that the Muslim world, especially the Middle East, realise it needs to deeply reconsider its religious, moral and political thinking.

What we need today are efforts such as Sheikh Shaltut and Ayatollah Ghomi’s for better communication between Sunnis and Shi’as. We need efforts that go beyond the dirty game of struggling for political power, which inflames sectarian division.

Indeed, we ought to commend the rekindling of this spirit through the formation of the World Assembly for the Rapprochement of Islamic Schools in 1988 in Tehran. It is hoped that the others will follow suit. The assembly’s current Secretary General, Ayatollah Muhammad Ali Taskhiri, proudly says that this World Assembly was established with the blessings of Ayatollah Al-Khamanei to be a continuation of Shaltut and Ghomi’s efforts in Cairo.

It would be an unforgivable historical mistake if the current events in the Middle East led the region to mulūk al-tawā‘if (a break-down into different kingdoms along community lines), just as it did under the Umayyad Caliphate in Andalusia with tragic and traumatic historical consequences for the whole Muslim community.

Hence, we hope that the spirit of Sunni-Shi’a relations of Sheikh Shaltut and Ayatollah Ghomi will be renewed in Egypt, Syria, Iraq, Lebanon and all over the Muslim world. And we hope that we will soon witness a Muslim peace that will last for centuries to come.

Sheikh Mustafa Cerić is the Grand Mufti Emeritus of Bosnia-Herzegovina and a visiting professor at WISE University in Amman, Jordan.