Shakespeare Does Iraq: Watch The Audience 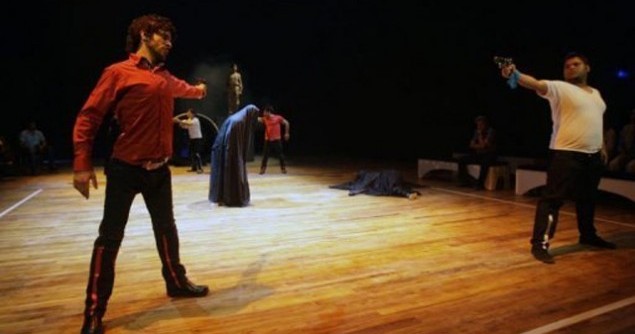 As part of the 2012 Summer Olympics hosted in London, the Royal Shakespeare Company challenged theatre groups around the world to create contemporary re-imaginings of 16th century playwright William Shakespeare’s classics. Of the many unique and creative performances,Romeo and Juliet in Baghdad, performed by the Iraqi Theatre Company, caught my eye. Could one of Europe’s greatest romantic tragedies, written in the 16th century, tell us something about Iraq in the 21st century?

Adapted into colloquial Arabic, and performed by an Iraqi cast with English surtitles above the stage, the story, while written in an Iraqi context, is a familiar one. The story opens with two brothers, Montague and Capulet, who have feuded for nine years over who will steer their family’s pearl-diving ship. This serves as an apropos metaphor for Iraq at the beginning of the war. Romeo and Juliet, who like all the play’s characters retain their original Shakespearean names, have already met and fallen in love before the feud. They have been kept apart by the cycle of violence resulting from the feud between their fathers.

The play focuses less on their romance and more on how families, communities and nations can easily and quickly be torn apart. The story prompts the audience to reflect on how pride, regret, a lack of mutual understanding and interference from the outside are obstacles to resolving conflicts peacefully. Once blood has been spilt, we are never sure if peace can be restored.

The play’s director, Monadhil Daood, fled Iraq in his 20s after staging a play under Saddam Hussein about the Iran-Iraq war. In 2008, he founded the Iraqi Theatre Company to “bring a contemporary cultural voice of unity and inclusiveness into the civic discourse in Iraq”. Monadhil says that “I think my [play] ‘Romeo and Juliet in Baghdad’ will be a mirror. The audience will see themselves on the stage.”

In the buzzing auditorium, I saw his prediction come true. The emotional effect the play had on its audience was clear. During the performance, many had eyes filled with tears. At joyous moments, audience members tapped along to the wedding songs and laughed at the inclusion of an old Iraqi folk story about a beetle looking for love.

During the most emotional moment of all, I felt almost swept off my chair at the audience’s roar of approval as the imposter, who was betrothed to Juliet against her will, and who had stoked the tension between the two families, was cast out by Juliet’s father, Capulet. This character, a miserable hardliner, represents the presence of al-Qaeda in Iraq. Through Capulet’s action, the betrothal is reversed and his presence is no longer accepted.

The real story of Romeo and Juliet in Baghdad is of the audience, who see their lives played out before their eyes. The drama was an opportunity to create enough distance from their own stories so that they could look at the effect of the last nine years on their homeland, with its immense loss, death and suffering. It was an opportunity to move on, make sense, find catharsis and even laugh.

The play at its heart is a universal story of the birth and development of conflict, stoked by fear, misunderstanding and pride. It shows how outside forces can stoke conflict and divide groups of people, and reflects on the need for unity.

In this case, a love story is a portal into a world that audiences might otherwise never be able to begin to understand. By connecting with the story of young lovers – a theme that transcends time and culture – we can learn about the nuances of today’s Iraqi society. The play helps viewers understand tight knit family structures and the once strong historic relationships between Sunni and Shia Muslims that are now being broken down. In fact, people around the world might find a lot in common with the ordinary folk of Iraq and their aspirations to bring an end to violence and live better lives.

But more importantly, through such plays, we are confronted with universal truths: conflict persists across human societies and it must be addressed before it spirals out of control. But most of all, the aspiration to love and be loved is present in all times and places, whether in Baghdad or Verona, for lovers like Romeo and Juliet, or for brothers like Montague and Capulet