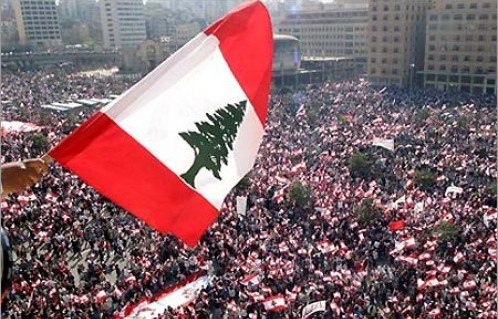 On 20 March, the day before the Mother’s Day in Lebanon, 30,000 people of all ages took the streets of Beirut chanting slogans and demanding the abolition of the country’s confessional system. This was the latest in a series of demonstrations that began on 27 February with 3,000 young people committed to demonstrating each Sunday for a secular Lebanon that guarantees equal rights for all its citizens.

Their demands are clear: demonstrators want a secular state, a personal status law that guarantees women’s rights, the end of Lebanon’s current system which allows religious sects to apply different civil laws on issues related to divorce or heritage, and the establishment of civil marriage.

Lebanese civil society seized the momentum from popular uprisings in the region to launch a campaign for the abolition of the confessional system of power-sharing between Lebanon’s different religious groups. Although the Preamble of the Lebanese Constitution stipulates that ”The abolition of political confessionalism is a basic national goal…”, due to the 1943 National Pact – an unwritten agreement – power sharing was established on a confessional basis where parliamentary seats are allocated on the basis of religion, and the highest positions are filled by people from specific sects: the president is always Maronite Christian, the prime minister always Sunni and the speaker of parliament always Shiite.

With 18 recognised religious communities, laws on personal status that deal with marriage, divorce, adoption, child custody and inheritance are handled by different religious courts run by each community. Druze, Shiite and Sunni citizens each apply different interpretations of sharia (Islamic principles of jurisprudence). And the Orthodox and non-Orthodox Christian communities apply different versions of canon law. Most of these laws tend to favour the rights of men and stress patriarchal values.

This system of different courts results not only in unequal application of the law when it comes to men and women, but also amongst Lebanese women themselves. For example, Sunni and Shiite courts allow men to enter into polygamous relationships, while Druze and Christian courts do not. Divorce is prohibited in Catholic courts, whereas it is permitted in Sunni, Shiite and Druze courts.

Those who opt for civil marriages outside of Lebanon face another challenge. Many personal status laws disallow marriages if one person in a couple is from a different religious community. And because there is no civil marriage in Lebanon, many religiously mixed couples that do not believe in religious marriage or couples where one partner does not want to change his or her religion, are obliged to travel to neighbouring countries like Cyprus or Turkey.

Various attempts to institute one civil code pertaining to the status of the individual, even as an optional measure, have failed due to a political and social system based on confessional power-sharing.

However, civil society has decided to act. A vast roadside billboard campaign was launched in March by the KAFA (which means enough in Arabic) network which brings together various women’s associations and organisations. The aim of this campaign is the full implementation of Article 16 of the UN Convention on the Elimination of All Forms of Discrimination against Women which clearly stipulates equality between men and women as far as marriage is concerned and at the spouse’s discretion. KAFA advocates that all Lebanese people be subject to the same personal status laws, which guarantee women the same rights and obligations in marriage, inheritance, divorce, alimony and custody afforded to men under the Lebanese Constitution and gender-sensitive international agreements.

A unified civil code on personal status would put an end to existing inequalities between men and women, and among Lebanese women of different confessions, and is the first step in upholding the constitutional aim of abolishing political confessionalism.

Rita Chemaly is a social-political researcher and author of Spring 2005 in Lebanon, Between Myths and Realities. She won The Samir Kassir Award for Freedom of the Press in 2007 and blogs at www.ritachemaly.wordpress.com