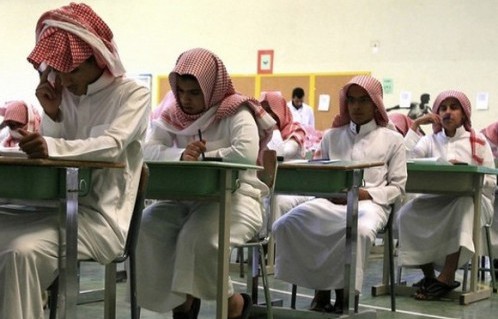 A power struggle usually ends with winners and losers. If a new religious textbook critical of Western culture is any indication of who is winning the role of guardian of young minds in Saudi Arabia, then Islamic conservatives are the clear victors.

In what amounts to a rebuke of a scholarship program under the aegis of none other than King Abdullah himself that sends thousands of young Saudis to foreign universities, a new secondary school textbook called Hadith argues that Western culture exposes students to corruption.

“The conservatives have the upper hand and have made sure that it’s their voice that says what is permitted in Islam,” Ehsan Ahrari, a Middle East analyst based near Washington DC, told The Media Line “The conservatives have the loudest voice in making a persuasive argument within the Saudi context. Saudi Arabia is truly concerned about modernization in its educational institution, but even the king doesn’t know how to deal with it.”

The publication of the book comes at a sensitive time for Saudi Arabia as it struggles to scrub its textbooks of derogatory language of other religions and cultures. The Ministry of Education has made progress to eliminate some passages, including controversial definitions of jihad.

More than 100,000 Saudis have obtained King Abdullah Foreign Scholarship to pursue studies in universities in professional fields such as medicine, computer science, engineering courses and administration and finance. About 30% study in the U.S., 15% in Britain, 11% in Canada and 8% in Australia. Only about 6% study in a Muslim country, Egypt. Saudi Arabia has the largest number of citizens studying aboard of any country in the world.

The textbook, which warns students of democratic countries’ attempts to Westernize Muslim countries by advancing the United Nations’ human rights agenda, has received little attention in the media, where restrictive laws passed in response to the Arab Spring. The Saudi government can levy fines and jail sentences for criticizing government institutions.

As a result, few Saudis are willing to publicly criticize for the record the Ministry of Education. Religious conservatives, Ahrari says, are taking advantage of the chilling effect of those laws to broaden their power.

But the book has lit up the social media with complaints – mostly anonymous – that politics have no place in teaching hadith, sayings attributed the Prophet Muhammad. The authors are accused of attempting to politicize Islam by slipping criticism of the West into religious texts just as students are preparing to enter foreign universities.

However, Hadith has brought renewed scrutiny to how the ministry vets textbooks that contain political opinion. The controversy also renews focus on how much influence Saudi conservatives wield at a time when Egypt’s Muslim Brotherhood and the Islamic Ennahda Party in Tunisia are also flexing their political muscle.

The textbook details the “risks” scholarship students face. “A lot of them [student] have returned laden with the spirit of the West, breathe with its lungs and think with its mentality,” the book states. “They echo their Orientalist teachers in their own land and spread their ideas and theories with deep belief, increasing enthusiasm and eloquence so they become a burden on their society.”

“The percentage of those who survive from this influence is a very little one,” the book’s authors say.

Another section in Hadith, entitled “Westernization,” targets the UN. The section characterizes the international organization as a tool for “dominating” Western powers to apply political pressure on Muslim countries to adopt more aggressive human rights legislation. The West, the textbook argues, uses “the United Nations, the Security Council and its different committees, on weak countries, especially the Islamic ones. This is done for the sake of westernization under slogans such as reform, democracy, pluralism, liberation and human rights, in particular those related to women and religious minorities.”

In fact, some of the views expressed in Hadith are widely held by Saudis.

Maha A., a 33-year-old Jeddah native and university student studying in Newcastle, England, says the UN entry in the book is legitimate. She points to the UN Convention on the Elimination of All Forms of Discrimination against Women (CEDAW) as meddling in the Kingdom’s affairs and with sharia, or Islamic law. Saudi Arabia ratified CEDAW in 2000. “I have no problems with the way the United Nations is portrayed in the book,” she told The Media Line.

The schoolbook also warns of Western attempts to subvert Islamic culture by distributing “immorality” through the media. It considers the media tools to advocate western values.

Turki Al-Dakheel, a journalist and presenter on Al-Arabiya television, complained in a column in the Arabic-language daily Al-Watan that the textbook’s “extremist” portions are not consistent with the changes taking place in the international community and in Saudi society.

“The same educational institutes that send students abroad also criticize the scholarship [program],” Al-Dakheel argues. “We should take out the mentality of disagreement from our curriculum in order to protect our students from being politicized or being slaves to one single notion.”

Ahrari, the Washington-based analyst, told The Media Line that the book’s content is less a challenge to King Abdullah and more of “classic bureaucratic” infighting in the Ministry of Education

A Saudi Ministry of Education official, speaking on the condition of anonymity because of the sensitive nature of the textbook, agreed. He told The Media Line that there are two factions in the ministry struggling to implement their ideology: Western-educated liberals and Saudi-educated conservatives.

Many of the ministry’s decision-makers hold postgraduate degrees in education from the U.S. and Britain. These supervisors often square off with mid- and upper-level managers educated in Islamic studies from Imam Mohammed Bin Saud University in Riyadh and other Saudi universities.

“There is a great debate between conservatives and liberals. The conservatives are in the minority, but they are very active,” says the official, although he notes the ministry’s policy requires moderation in texts.

The infighting is so intense, he says, that the ministry recently began publishing school textbooks without authors’ names to prevent accusations of extremism. Yet the anonymously authored books have also led to the lack of accountability within the ministry’s ranks for authors failing to adhere to moderation guidelines.

One 22-year-old Riyadh student studying in Britain says there is little merit in warning scholarship holders of the dangers in the West.

“Saudi students are already asked to attend a two-week course on Western culture. The scholarship program selects the highest qualified students to go abroad. If a student is weak in religion and cultural values, he won’t be studious and he won’t be allowed in the program,” Muhammad A. told The Media Line.

But the student also says that human rights issues advocated by the UN are consistent with the pillars of sharia. “Sharia talks of human rights and it’s no different than the United Nations’ human rights. It’s compatible, and there are no negative effects on Saudi Arabia,” he says.

This article was originally published in The Media Line.