Saudi Education: Could Do A Lot Better 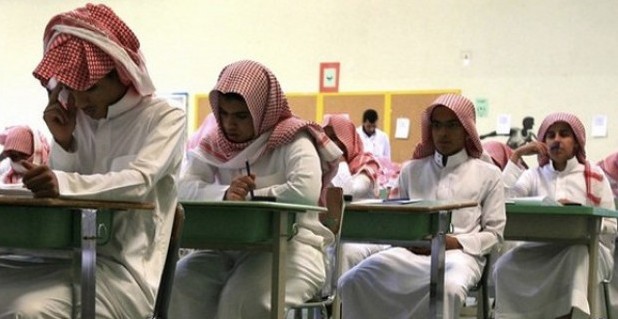 In the years just before the 9/11 attacks, I spent two semesters at a public school in Riyadh for my training as a teacher. I was stationed each day at the campus gates, instructed to inspect the girls’ abayas as they left school. For each student older than 12, I checked: Was she wearing the tent-style cloak over her head and down to her ankles? Was her face fully covered, no slits for her eyes? I felt like a hypocrite, penalizing girls for violating a custom I don’t support — and one that the majority of Islamic scholars say is not a religious obligation.

The mandate was and still is part of the government-issued curriculum taught in Saudi public schools; it was in their textbooks that the girls were told they should cover their faces in order to be good Muslim women.

Much is made about the role of Islam in Arab societies — how different interpretations of the Quran can shape laws and conventions. But less often do we consider how these interpretations reach our children: at school and, ultimately, in the textbooks they read. Since Saudi Arabia’s first national textbooks were issued in 1937, the controversies they have inspired have mirrored the country’s most fundamental debates — about religion, the treatment of women, the influence of the West. Over time, textbooks have become instruments of the country’s religious conservatives, replete with calls to jihad and denunciations of non-Muslims. Yet despite periodic reform efforts, and even though these efforts have escalated amid the global outrage that followed 9/11, in many ways the books remain stubbornly impervious to change. Even in the past two years, they have instructed first graders not to greet infidels and warned 10th graders of the West’s threat to Islam.

The Saudi education system wasn’t always destined for orthodoxy. King Abdulaziz, the kingdom’s founder, established the precursor to today’s Education Ministry in 1925, seven years before officially founding the country in 1932. The first national textbooks were heavily influenced by Egyptian and Lebanese curricula, and their chief author, the researcher Omar Abduljabbar, was considered a progressive, opening one of Saudi Arabia’s first private girls’ schools at a time when only boys could attend public schools.

By the 1950s, however, religious ultraconservatives had begun putting down roots in the Education Ministry. Despite the ministry’s efforts to recruit members of the Muslim Brotherhood from Egypt and Syria, who were seen as proponents of a more liberal form of Islam, the more powerful Saudi religious establishment ensured that textbooks and school policies would become more intolerant and conservative, which the government’s 1968 educational policy document solidified formally. In the following decades, those brave enough to criticize the government-mandated curriculum were scarce if not nonexistent. Saudis who were unhappy with the public education system could send their children abroad; even private Saudi schools were (and still are) required to teach Arabic and the government’s religious curriculum.

Things went on this way with few changes until 15 of the 19 hijackers responsible for the 9/11 attacks were revealed to have been Saudis. Suddenly, outsiders began asking questions and pointing fingers, wondering what exactly was being taught in our schools. A 2002 Boston Globe report, for instance, bearing the headline “Saudi Schools Fuel Anti-U.S. Anger,” quoted inflammatory passages from a government textbook, such as, “The hour will not come until Muslims will fight the Jews, and Muslims will kill all the Jews.” Saudis, too, began to reconsider: What kind of messages were we teaching our children?

The question was blown wide open in 2006 with the publication of a Freedom House report titled “Saudi Arabia’s Curriculum of Intolerance,” which was translated into Arabic and published in the local newspaper Al-Watan. The report analyzed 12 Islamic-studies textbooks, concluding that “the Saudi public school religious curriculum continues to propagate an ideology of hate toward the ‘unbeliever'” — most egregiously in a 12th-grade text that instructed students to wage violent jihad against infidels to “spread the faith.” Many Saudis bristled at a foreign organization meddling in their internal affairs, but the findings managed to rekindle the debate about Saudi education. The pages of Saudi schoolbooks were finally submitted to a new, unfamiliar scrutiny — not just from outsiders but also from Saudis themselves.

The Education Ministry responded to the criticism, appearing to commit itself to reform by relegating 2,000 teachers it deemed extremists to administrative roles far from the classroom. The ministry also instructed principals to report anyone preaching extremism

Yet textbooks remained largely untouched, with only the most explicitly intolerant material removed. Now and then a journalist today picks up one of the government-issued schoolbooks only to find that extremism has sneaked back into Saudi schools.

In the 2010-2011 academic year, the new first-grade jurisprudence book (yes, “Islamic jurisprudence” is taught in the first grade, along with a subject called “monotheism”) condemned saying hello to non-Muslims. The lesson was presented as a dialogue between a teacher and a student named Ahmed. Ahmed asks, “Should I say hello to people I don’t know?” The teacher replies, “Yes, you say hello to Muslims you know and Muslims you don’t know.” The news caused an uproar in the Saudi media that prompted the Education Ministry to recall the books and remove the offensive portion. But the new copies suspiciously omitted the names of the book’s authors, replacing them with the phrase “Authored and revised by a team of experts.” Among the book’s creators had been Sheikh Yusuf al-Ahmad, known for suggesting that the Grand Mosque in Mecca be rebuilt to ensure complete gender segregation and for calling for a boycott against supermarkets that planned to employ female cashiers. (The sheikh is currently in prison for speaking out against the government’s practice of imprisoning political dissidents indefinitely and without charge.)

Just last year, new interpretations were introduced in the boys’ 10th-grade hadith, the book of the Prophet Mohammed’s sayings and traditions. (Ever since a 1958 royal decree that allowed Saudi girls to attend public schools, boys and girls have been required to use different textbooks.) The move seemed progressive on the surface: The new subjects included human rights, Westernization, globalization, and international scholarships — but under these headings lay more propaganda. Westernization, for instance, was described (in a mouthful) as a policy “exerted by the dominant forces by tools such as the Security Council and the United Nations in order to implement Westernization strategies in poor countries, especially Islamic nations, under the slogans of reform, democracy, pluralism, liberalism, and human rights, particularly with regard to women and religious minorities.” The book also warned that by obtaining an education in the West, Saudi students were at risk of adopting beliefs, values, and behaviors at odds with Islam.

The hadith additions were widely thought to be an underhanded way of criticizing Saudi King Abdullah’s scholarship program, which since 2005 has funded 130,000 Saudi students to study in countries such as Australia, Britain, Canada, and the United States. That such anti-Western language made it into the hadiths proves how embedded Saudi ultraconservatives are in the Education Ministry — they were able to modify textbooks even against official national programs.

The Education Ministry ultimately held its ground, revising the textbooks to exclude the intolerant subject matter. Still, teaching extremism is only one facet of a much larger, more persistent problem. In a 2009 study on education reform in Saudi Arabia, Riyadh-based researcher Ahmed al-Eissa found that the lion’s share of the average male Saudi student’s class time — about 30 percent — is still in religion. It’s no wonder then that Saudi Arabia ranks so poorly in other core academic subjects. In the 2007 Trends in International Mathematics and Science Study, published by the U.S. National Center for Education Statistics, only Ghana and Qatar fared worse than Saudi Arabia in eighth-grade math scores across 48 countries. In science, Saudi students only performed better than those in Ghana, Qatar, Botswana, and El Salvador.

A study published last year by religious scholar Abdulaziz al-Qasim found that Saudi religion textbooks “have focused far too much on the lowest educational and skill objectives, such as rote memorization and classification, and neglected entirely the objectives of analysis, problem-solving, and critical thinking,” leading to “passiveness and negativity.” But Eissa’s 2009 study noted that there is widespread refusal within the Education Ministry even to acknowledge the need for an overhaul.

It has been more than a decade since the Education Ministry began working on a plan to address these problems. Known as the Comprehensive Curricula Development Project, it is expected to be implemented across the kingdom in the next year, according to its website. Yet, if one reads the project’s mission statement for religious textbooks, it is difficult to be optimistic. It calls for the books to require that “the learner grasp his membership and loyalty to Islam and derive all his affairs within it and renounce all that goes against it,” as well as to “protect himself in facing deviant sects, creeds, false interpretations of sharia with reason, evidence, and politeness.” Nowhere in the statement’s 28 points is there any mention of tolerance or peace. Somehow “time management,” No. 28, is a bigger priority.

Even if the ministry’s changes materialize, education reform in Saudi Arabia is not simply a matter of revising textbooks. It’s a matter of changing the minds of whole generations. Saudis who were taught to believe a very narrow interpretation of Islam are now foisting it onto millions more students. They will have to determine a way forward — but they won’t find the answer in their textbooks.