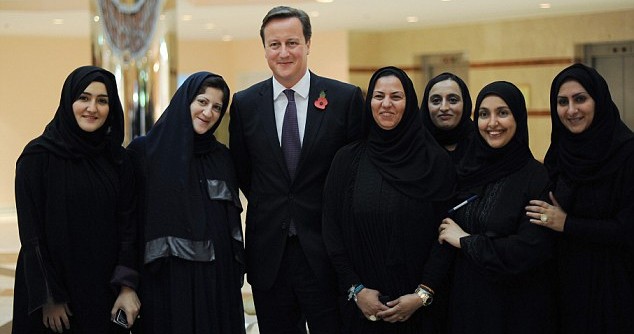 During his visit to Saudi Arabia last week, British PM David Cameron made a stop at Dar Al-Hekma College (DAH) in Jeddah. The private girls college held a roundtable with students and alumni to welcome the visitor from England.

Private higher education institutions in Jeddah have become a usual stop on the schedules of foreign dignitaries who come to Saudi Arabia in recent year. US Secretary of State Hillary Clinton had a large town hall meeting with students at DAH when she visited the country in February 2010.

On both occasions, the Western visitors praised the intelligence and determination of the female students, and in both cases religious conservatives attacked.. well, everyone: the visitors, the colleges and the students.

Nasser al-Omar, another cleric, asked how is it possible for “those who organized, permitted or participated at the meeting of our girls with a Christian official” to be loyal to our religion, country or people?

More people on Twitter made similar remarks, using even coarser language. This prompted a number of DAH students to say that they will file a complaint with the court against what they described as defamation on the social network, according to Saudi Gazette.

When Cameron visit’s to DAH was first announced, Hanan al-Shargi asked: “Why did the private girls colleges in Jeddah become a regular stop for foreign dignitaries? Why don’t they visit the public King Abdulaziz University (KAU), for example? Are we embarrassed by KAU students, or is their English not good enough?” she added.

Those questions should probably be directed at those foreign officials, but let me take a shot at guessing some answers.

First, there is the political gain that Western politicians can easily achieve by such visits.

When Cameron visits Jeddah and meets with the students, he can come back to tell his parliament that he did not just go to Saudi Arabia to sell arms and ignore their dismal record on human rights. He can go back to London and say that he didn’t just discuss human rights with the Saudi government, he has actually met non-government actors and visited a girls college known for empowering women.

Second, logistics and bureaucracy. Most of these visits are usually proposed by the embassies of those foreign countries, and for them it is far more easier to deal with a small private college than a big public university where they have to go through a lot of red tape. Speaking to foreign diplomats over the years, many of them told me that public universities remain off limits to them.

The Education Office at the US Embassy in Riyadh has been for years seeking permission to organize activities at local universities to help Saudi students prepare before they fly to the US to study on government scholarships. No permission was granted, despite the fact that more than 70,000 Saudi students are currently seeking degrees in America.

Then, there is the general perception that those small private girl colleges in Jeddah are more liberal and progressives than public higher education institutions in the country, a perception that many people would agree with. Even though these private colleges are women-only, they don’t have a problem welcoming male speakers every once in a while.

Now compare this with the “crisis” in Dammam University two months ago when a German female professor entered the engineering building of the male students and gave her first lecture in the semester to the students who were apparently freaking out. Some of them reported the incident to the dean who asked the professor to leave the classroom immediately. It turned out that the professor was confused about her schedule, and that she is only supposed to teach female students.

This is one of these these issues that is a non-issue, really. But then again, it is the kind of thing that conservatives enjoy the most: an issue that involves women, especially one where they don’t have to worry about a direct confrontation with the government.

In the end, it is the control of the social arena that they seek the most. As long as they don’t choose to challenge the government, the government would gladly let them have it.

One Response to Saudi Conservatives ‘Froth’ At Female College Visit