‘Sand In Your Pants’: It’s Time for Desert Fun 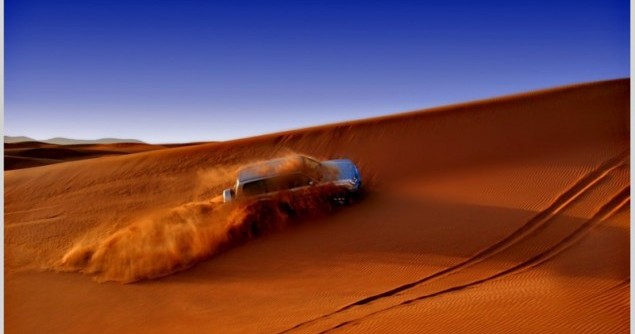 Weekend breaks just ain’t what they used to be. None of that popping into the hills behind town, buying organic apples at a roadside stall, wine tasting on the way, rolling fields, fragrant gums, roos doing their kamikaze leaps across the highway in front of your speeding car at dusk. No more country pubs for lunch, farmers markets in paddocks, cheese sampling in stinky dairies. Ahhh, those were the good old days.

But these are the good new days. This arid region might not offer much in the way of greenery, cellar doors and local produce, but there’s a whole lot of sand to explore. Only twenty minutes drive from the spires of Sheikh Zayed Road will bring you into a beige sea that tilts and rolls just like the blue one. Its texture changes  – some regions are rusty and treacherous, others like peachy crumpled blankets, and more are flat and stony, the colour of parched bones. The sands reflect the sky’s moods just as the watery depths do. They are blindingly bright, mousey, red, purple or black. It’s amazing how different something can look when it’s really all the same.

Staying in the desert is something that everyone must do when they come to Dubai, or anywhere around here really. Even in summer, when the back blocks of this dusty land resemble the sunny side of Mars, when the very air melts, there are options. If you live here, then there is really no excuse.

There are three styles of desert experience. First, the self-arranged camp. But I’m no expert on this, and tend to sympathize with Debbie in this post. If that’s your piece of cake, I’ll start you off with Time Out’s suggestions . Then get yourself down to Carrefour, spend 3000AED on gear that you’ll only use once, and I’ll titter over my Mai tai while I lay back poolside at Qasr al Sarab and think of how we’ve just spent the same amount of money for entirely different experiences. (I know, I know, it can be good. But ONLY if you’re kitted out, know what you are doing, and where you are going.)

Secondly, is the organised camp. This varies in quality from five stars down to about negative one, so make sure you do your research, and have reasonable expectations before you trek out there. Most of the ‘dune bashing’ organisors will also offer an overnight stay that is tacked onto the evening ‘safari’ (safari means “a journey or expedition, for hunting, exploration, or investigation”, so this term has been entirely exploited). To be honest, if you don’t have much to spend, don’t mind a bit of kitch and noise, and it’s not summer, then this could be a good option. Prices will include all manner of gimmickry like camel rides (a circle 20m in diameter, not an idyllic sunset wander over the dunes), henna painting (careful, you may be allergic), trying on of national costume (100% polyester, worn by hundreds before you), belly dancer and super duper authentic buffet of soggy spaghetti bolognese and bland chicken curry followed by watermelon chunks and crusty custard. Sleeping conditions are basic, but most camps have toilets and showers. All operators are much of a muchness – the tip is to get a deal. Groupon and makshoom will have them going now and then, so if you plan ahead you can really save some cash.

If you want something a little more towards the upper end of the spectrum (yes please!), have a look at these (in ascending order of quality/authenticity)

Thirdly, is the desert resort. This ranges from faux glamping (the term ‘tents’ could only be used loosely) through to desert castles like Qasr al Sarab. There’s several around, the more notable of them being:

So – enough options? C’mon, time to get some sand in your pants…