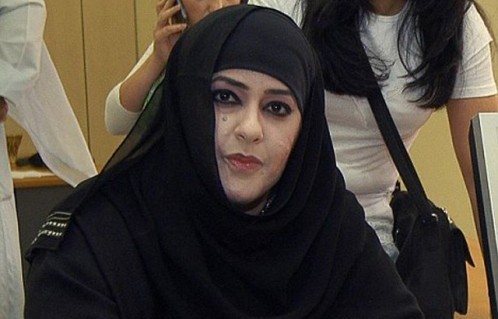 Muslim women rarely talk about sex in public. To do so is considered by the cultures they inhabit – not by Islam – as one of the great taboos. So what on earth possessed Salwa al Mutairi, a failed politician from Kuwait, to declare that female “sex-slaves” were a solution to meet the needs of lusty Kuwaiti husbands?

According to Al Mutairi, Kuwait is jam-packed with men whose excessive virility means they are aroused to a frenzy by the sight of female domestic help wielding a vacuum cleaner or stacking a dishwasher. Her solution to their uncontrollable libidos: buy women from war-stricken countries to be their sex-slaves. She suggests Chechnya, where female prisoners of war are in plentiful supply, and who will be grateful for being saved from starvation.

Predictably her comments have been seized upon by Islamophobes. And no wonder. She’s managed to wrap up every possible stereotype of Muslims into one mind-boggling story: men who treat women as possessions; oppressed wives; women who buy into the worldview that men are there to be satisfied at all costs and that the Arab desire for conquest is still rampant. And she’s quoted some “specialists of the faith” to make it look as though this is a religious position that all Muslims hold.

Here’s what I think of Al Mutairi’s views: bonkers.

Her opinion is about as representative of Muslim thinking as the Pope is a Muslim. That is to say, not at all. Yet because she feeds into existing prejudices, she has received wide coverage. It’s a bit Sarah Palin: all hype and no sense.

Just to be clear, Muslims don’t condone the buying and selling of women, or any human beings. We’re opposed to it. Islam doesn’t see men as ravaging sex-beasts, rather men should treat their wives with compassion and respect. Muslims are not out to conquer the world, or take prisoners of war. Instead, Islam counsels peace and harmony with its neighbours, and that Muslims should act as a refuge for those who have been afflicted by war.

Of all the craziness that props up Al-Mutairi’s strange notions, the one that really bothers me is that men are beholden to uncontrollable lust. And that’s a notion that pervades both eastern and western cultures. Let’s get rid of the idea that men are hostages to their libido once and for all.

I’m fed up with excuses rolled out for men that they are so feeble and lacking in self-discipline that they are incapable of controlling their sexual desire. But, strangely they are not incapable of being the head of a household or running a country. My view: if men can’t control what’s in their pants, then their argument that they should control society is on pretty shaky ground.

Men who have power and wealth believe that they can treat women as possessions; that “manly’ men who are overloaded with testosterone must inevitably engage in affairs. Al-Mutairi’s views fit into this same power and lust paradigm as the Dominique Strauss-Khans of this world, or the Arnold Schwarzeneggers. It’s the same wrong-headed thinking that sees women in war as legitimate targets for abuse through the wielding of power and sex, as we’ve seen in the recent allegations that Qaddafi used rape as a weapon of war.

Let’s get away from this sleazy, skin-crawling, dirty tone that sees women as sex objects. It’s a pernicious paradigm that men as well as women must challenge. And no taboo should hold us back from saying so.