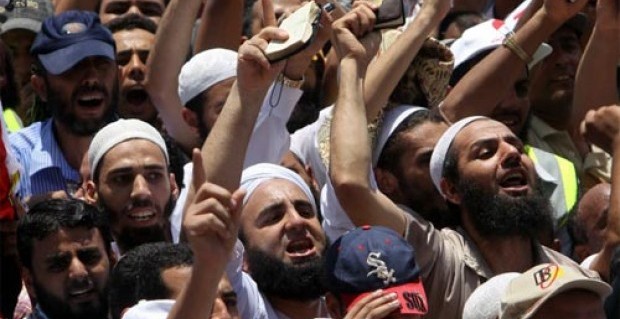 Saudi weekly magazine Majalla runs a story on the Salafist war against arts and culture in Egypt. Not only are actors and directors being arrested for supposed ‘crimes against Islam’, but the hard-line conservatives are also calling for bans on the books of Nobel Laureate Naguib Mahfouz and the covering of statues of the pharaohs in wax. At least they’re not calling for them to be destroyed or the Pyramids torn down.

Egyptian artists note that these are actions and ideas proposed by Salafists, but also note that the ‘more modern, more moderate’ Muslim Brotherhood says nothing about them, only claiming to ‘support culture’. Today’s Egypt is a far cry from the expansive cultural environments of its past, even as recently as the 1960s.

When Asran Mansour, a Salafi lawyer, filed a case against Adel Imam, renowned Egyptian actor, for “defaming Islam” in his films, no one expected that the verdict issued on 24 April 2012, by Judge Mohamed Abdel Aty would sentence Imam to three-months hard labor and a fine. Though the case was dropped on 26 April afternoon, the news outraged Egypt’s artists and equally angered international supporters of freedom of expression and creativity.

Adel Imam’s case is one of the many indications that Islamists are implementing limits on culture and freedom of expression. Also on trial with Imam were directors Nader Galal, Sherif Arafa, and Mohamed Fadel, and writers Wahid Hamed and Lenin El-Ramly, who faced the same charges of “defaming Islam.” Their cases were also dropped on 26 April.

The arts and culture scene will not be silent regarding Imam’s sentence—just as it will not remain passive when challenged by many other limitations posed on culture. The fight against such religious-based censorship is expected to be a long and painful one for all of Egypt’s creative minds.

One Response to Salafist War on Egyptian Culture ‘in Full Flow’