Riyadh’s DQ: The Oasis that Became A Ghetto 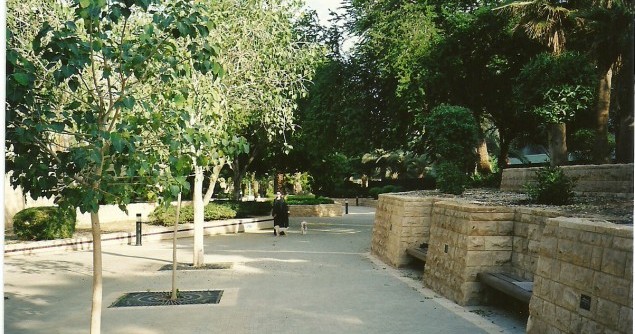 When I used to live in Riyadh, the Diplomatic Quarter was one of my favorite areas in the city. Clean, organized and quiet, it felt like a secret oasis within the city. In a way, it was. Since the early 2000’s, access to the neighborhood has been highly restricted due to fear of terrorist attacks targeting the diplomatic missions located there.

I have previously complained about how hard it is to enter the Diplomatic Quarter, or DQ for short, for regular people. I have not been to Riyadh in a few years, but I guess the problems in getting to the DQ remain the same despite the fact that the security situation in the country has improved a lot.

Now in addition to being the semi-official newspaper for the country and the capital’s city namesake, al-Riyadh daily also serves as a newsletter for the Saudi royal family. When a prince gets married, al-Riyadh would typically run pages upon pages full of pictures from the all-male wedding. Such weddings usually take place in a banquet hall called Palace of Culture in the Diplomatic Quarter.

The newspaper recently ran photos from yet another prince’s wedding at the Palace of Culture. That made wonder if there are ever any cultural events held at this place. The answer is yes, but very rarely. Most of the time, it is simply used as a wedding hall for the elites.

As I was doing my research on that location, I came across thisinteresting piece about the planning and building of the Diplomatic Quarter published in Saudi Aramco World in their September/October 1988 issue. The magazine, published by the national oil company, is one of the oldest publications in the country.

Unlike the current the situation where the DQ feels blocked from the rest of the city by multiple security checkpoints guarded by squads of heavily armed and grumpy security forces, the original vision for the area was that it would be a “normal neighborhood.” Mohamed Alshaikh, president of ArRiyadh Development Authority (ADA), who has spearheaded the project when in the late 1970’s, told the magazine:

“Physically, functionally and socially, the quarter is by no means separate from the rest of Riyadh,” he says. In fact, “diplomatic mission personnel will number less than 10,000” of the DQ’s projected 22,000 inhabitants, and the quarter will be “a normal neighborhood of Riyadh, with priority for the diplomats.”

For current residents of Riyadh, the DQ is anything but a normal neighborhood. Alshaikh went on to say that they did not want a “ghetto feeling to develop” in the quarter. Planners wanted it to serve as a model for future urban development in Riyadh. That obviously did not happen. More than twenty years later, some would say that the rest of the city feels like a ghetto compared to the much nicer Diplomatic Quarter.

What went wrong? Nothing in the Diplomatic Quarter itself, but almost everything around it.

2 Responses to Riyadh’s DQ: The Oasis that Became A Ghetto