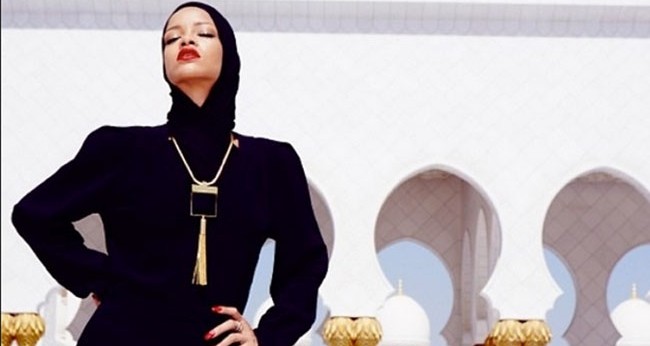 Covered from head to toe in a black Catwoman-style outfit, bad girl Rihanna struck a sulky pose for photos last weekend outside the Sheikh Zayed Grand Mosque in Abu Dhabi.

She won some praise for wearing a hijab, supposedly showing respect for the sacred space. Nonsense. She wasn’t there for the mosque. She left without visiting it. She had come prepared with a couture outfit and a team of crack photographers, and refused to enter through the proper visitors’ gate. She simply wasn’t walking in another culture’s shoes.

Then, showing a total lack of class, she posted a photo of another woman in a black abaya, with the caption “(expletive) stole my look.” I have news for RiRi: she didn’t steal your look, you stole ours.

Fashion and art are fluid creatures, and their lifeblood is borrowing style and artistry from across cultures. So I have no problem with artists crossing boundaries to explore meaning and symbolism. But this celebrity statement was less about cultural insight and more about profitable controversy.

In July, Madonna posted a picture of herself in a chain mail niqab, captioned “The Revolution of Love is on … Inshallah”.

Baffling. Instead of a substantive intervention in the heated niqab debates now going on around the world, she seemed to aim only at creating a striking image, for a world where visuals are everything, and layers of meaning are nothing.

I’m optimistic enough to hope that in borrowing our look, celebrities might be able to offer nuance in the feminist debate, while Muslim women’s voices remain largely unheard. But I feel my hope is no more realistic than the gauzy neon-pink burqa Lady Gaga wears in a recent video. You can argue that she has altered the portrayal of the burqa from an oppressive garment that prevents communication to one that – literally – reveals that Muslim women too think about sexuality.

Gaga used a cheap image to turn a garment with deep meaning into an advertising stunt. “Buy me!”, it cries. “I’m an edgy woman.” But all this image does is to edge Muslim women out of the conversation.

I don’t care what Gaga, Madonna or Rihanna thinks about veiling. But I care about Muslim women owning their own meaning in the world.

This is not just about a look. Many Muslim women say veiling gives them a multi-dimensionality, and these pop stars are deliberately flattening that into a simplistic visual image.

Rihanna and her celebrity ilk are sucking the plurality out of womanhood, and turning us into merely set-piece sexualised images for visual consumption. The centuries-old idea that veiling is just a sexual fetish is given a hearty endorsement by pop’s bad girls.

Just in case the co-option of modest clothing for the purpose of controversy and profit without insight was not sufficiently blatant, the fashion brand Diesel has been running an advert of a tattooed woman, covered only with a denim burqa over her head and chest, with the phrase: “I am not what I appear to be.”

These images are culture heists of the worst kind. Take our clothes and our art and our look, and layer on meanings and perspectives. But don’t suck them dry and flatten them for your profit.