The Ingredients of a Successful Marriage: The Missing Link 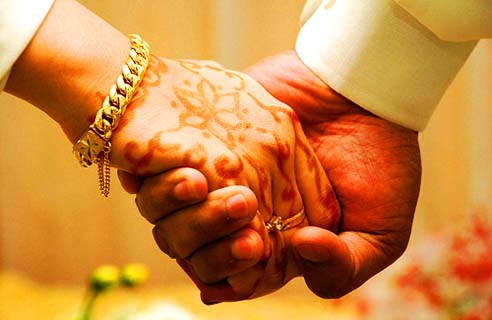 “And among His signs is that He created for you mates from among yourselves that you may dwell in tranquility with them, and He has put love and mercy between you; verily, in that are signs for people who reflect.” (Qur’an, 30:21)

According to Dr. Emerson Eggerichs, author of Love & Respect: The Love She Most Desires; The Respect He Desperately Needs, the answer is simple. In his book, Eggerichs explains that extensive research has found that a man’s primary need is for respect, while a woman’s primary need is for love. He describes what he calls the “crazy cycle”—the pattern of argumentation that results when the wife does not show respect and the husband does not show love. He explains how the two reinforce and cause one another.  In other words, when a wife feels that her husband is acting unloving, she often reacts with disrespect, which in turn makes the husband act even more unloving.

Eggerichs argues that the solution to the “crazy cycle” is for the wife to show unconditional respect to her husband and for the husband to show unconditional love to his wife.  This means that a wife should not say that first her husband must be loving before she will show him respect.  By doing so, she will only bring about more unloving behavior.  And a husband should not say that first his wife must be respectful before he will show her love.  By doing so, he will only bring about more disrespectful behavior. The two must be unconditional.

When I reflected on this concept, I realized that looking at the Qur’an and prophetic wisdom, there are no two concepts more stressed with regards to the marital relationship.

To men, the Prophet said,

He has further stressed: “The most perfect believer in the matter of faith is one who has excellent behavior; and the best among you are those who behave best towards their wives.” (Al-Tirmidhi)

The Prophet has also said, “A believing man should not hate a believing woman; if he dislikes one of her characteristics, he will be pleased with another.” (Muslim)

“…Live with them in kindness. For if you dislike them – perhaps you dislike a thing and Allah makes therein much good.” (Qur’an, 4:19)

In these jewels of wisdom, men are urged to be kind and loving towards their wives. Moreover, they are urged to overlook their wife’s faults when showing that kindness and love.

On the other hand, when addressing the wife, the focus is different.  Why are women not told again and again to be kind and loving towards their husbands? Perhaps it is because unconditional love already comes naturally to women. Few men complain that their wives do not love them. But many complain that their wives do not respect them. And it is this sentiment which is most stressed in the Qur’an and sunnah, with regards to wives.

Respect can be manifest in a number of ways. One of the most important ways to show respect is the respect of one’s wishes. When someone says, “I respect your advice,” they mean “I will follow your advice.” Respecting a leader, means doing what they say. Respecting our parents means not going against their wishes. And respecting one’s husband means respecting his wishes. The Prophet has said: “When any woman prays her five, fasts her month, guards her body and obeys her husband, it is said to her: ‘Enter paradise from whichever of its doors you wish.’” [At-Tirmidhi]

Why are we as women told to respect and follow the wishes of our husbands? It is because men are given an extra degree of responsibility. Allah says: “Men are the protectors and maintainers [qawwamun] of women, because Allah has given the one more [strength] than the other, and because they support them from their means . . .” (Qur’an, 4:34)

But won’t this unconditional respect towards one’s husband put us, as women, in a weak, submissive position? Won’t we set ourselves up to be taken advantage of and abused? Quite the contrary. The Quran, the prophetic example, and even contemporary research have proven the exact opposite. The more respect a woman shows her husband, the more love and kindness he will show her. And in fact, the more disrespect she shows, the more harsh and unloving he becomes.

Similarly, a man may question why he should show kindness and love towards even a disrespectful wife. To answer this question, one only needs to look at the example of Omar Ibn ul-Khattab. When a man came to Omar (who was Khalifah at the time) to complain of his wife, he heard Omar’s own wife yelling at him. While the man turned to leave, Omar called him back. The man told Omar that he had come to complain of the same problem that Omar himself had. To this Omar replied that his wife tolerated him, washed his clothes, cleaned his home, made him comfortable, and took care of his children. If she did all of this for him, how could he not tolerate her when she raised her voice?

This story provides a beautiful example for all of us—not only for the men. This story is a priceless illustration of tolerance and patience, which is essential for any successful marriage. Moreover, consider the reward in the hereafter for those who show patience: Allah says, “Only those who are patient shall receive their reward in full without reckoning (or measure).” (Qur’an, 39:10)

This article is published courtesy of SuhaiWebb, a site dedicated to moderate Islamic teaching. This article was also published by InFocus.