The Call to Prayer – An Unholy Row Amplified 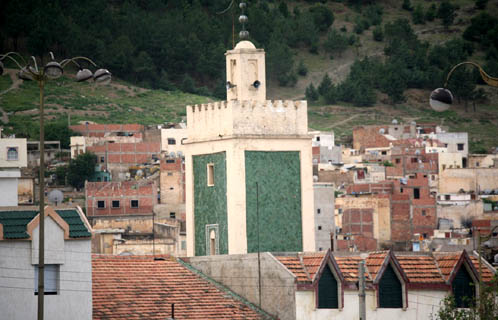 For a first time visitor to Morocco, one of the most immediate indications that they are in an Islamic country is the sound, five times a day, of the call to prayer. Because a majority of the mosques now use microphones and amplified speakers, the sound is all pervasive. And there lies a problem – not for visitors but for the locals.

Each year the Moroccan Ministry of Endowments and Islamic Affairs,the body in charge of all the mosques, receives hundreds of complaints about the noise level. According to residents in Fez, for example, the problem is that the proximity of the mosques means that there is a confusion of sound and that some mosques may be boosting the sound level to be heard above other nearby mosques.

The problem is not just in Fez. The latest statistics provided by the Ministry of Endowments and Islamic Affairs shows that there are around 48,000 mosques in Morocco – 13,000 in cities and 35,000 in villages. This means that every 5,000 people are served by seven mosques.

And now an “unholy row” has broken out over the use of microphones.

In a recent interview with Al Arabiya, Moroccan researcher on Islamist movements, Saeed Lakhal, called upon the government to ban the use of microphones in mosques on the grounds that they disturb residents in the neighboring areas not only because of the sound, but also owing to the ideas they spread.

“Many mosques in Morocco are not exclusively used for spiritual purposes and serve instead as a channel to propagate political ideologies,” he told Al Arabiya. “This is especially true when it comes to mosques run by Islamists.”
Mosques all over the country, Lakhal added, are under the supervision of the Ministry of Endowments and Islamic Affairs and are accordingly bound by specific regulations.
“This means that those movements that run mosques either abide by those regulations or give up control over the mosques all together.”Lakhal added that using microphones also bothers those living in residential areas close to mosques. This becomes more obvious in Ramadan when the taraweehprayers, performed every evening throughout the holy month and during which a part of the Quran is read, are also transmitted via microphones.“Using microphones becomes a necessity only in the case of over-crowded mosques when people have to pray outside and need a microphone to hear the prayer.”

Regarding the sensitivity of the issue and how offended some people might be by his request, Lakhal stressed there is nothing in what he suggested that could be considered offensive to Muslims or Islam.

“The strength of faith is never measured by how loud the calls for prayers are and mosques that do not use microphones still do their religious job.”

Lakhal pointed out that the complaints of residents about mosque microphones, which are filed at the Ministry of Endowments, prove that people do not approve of the practice.

Preacher and Islamist scholar Dr. Mohamed Boulouz accused Lakhal of having ulterior motives and of trying to strip Morocco of its Islamic identity.

“Lakhal’s ideas go against the majority. Who is he representing? And to whose benefit is he doing this?” Boulouz told Al Arabiya.

Boulouz added that Lakhal’s request is in line with the “poisonous” ideas he promotes in his articles.

“He pretends he is a modernist while he is in fact an anti-religious exclusionist.”

Boulouz argued that Lakhal’s proposal is not valid since there are very few mosques in Morocco in comparison to the population and the majority of worshippers pray outside.

“So instead of calling for building more mosques, he wants to silence the already existing ones.”

As for the taraweeh which Lakhal complained about, Boulouz pointed out that those prayers are performed in the early evening.

“At this time the streets are crowded and people are coming and going. In Ramadan, people stay up till very late.”

Boulouz added that if Lakhal was sincere in wanting to make sure residents are comfortable, he should also call for a law that prohibits microphones in parties and carnivals.

“Don’t those microphones in events organized by modernists like him disturb the sick, students who have exams, employees who have work, and others?”