Shining a little light on the Meaning of Eid al-Adha 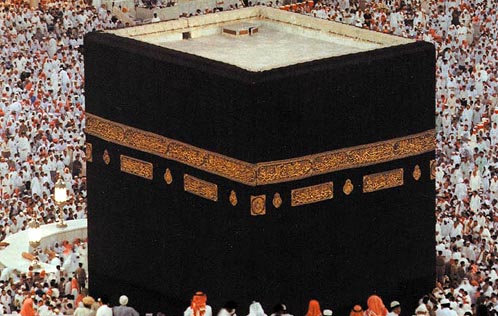 Talk of the Hajj and Eid reverberates around Dubai in the countdown to Eid al-Adha, or Feast of the Sacrifice, due to begin Sunday, November 6.

I was particularly absorbed into the excitement this year through my friend Nada Dabliz. Nada and I have coffee together every morning at Dubai Media City, before heading to our respective office buildings.

This year, Nada’s sister Abeer, who lives in Qatar, is going on the Hajj pilgrimage with her husband. Nada will be babysitting her nieces and nephew, having been to the Hajj herself in 1997.

Although I was initially thinking of nothing other than the Eid break, Nada passed on the thrill about the pilgrimage. She shared her experience with me, recounting how the Hajj changed her life as it does to most pilgrims. Our mornings have been mostly taken up by talk about the buildup to the impending feast.

Literally, Hajj means “to set out for a place.” For Muslims, that place is the Holy City of Mecca in Saudi Arabia. And we got into the history and symbolism of the place and the upcoming festival. That in turn set off my Internet search for supplementary information for this post. There was a lot to read and I found the Saudi-sponsored Ministry of Hajj website particularly helpful.

More than 1.5 billion Muslims worldwide celebrate Eid al-Adha to commemorate the willingness of Abraham (Ibrahim) to sacrifice his son Ishmael as an act of obedience to God, before God intervened to provide him with a ram to sacrifice instead. The sacrificial meat is divided into three parts: one-third for the family; another third for relatives, friends and neighbors; and the remaining third to the poor and needy. 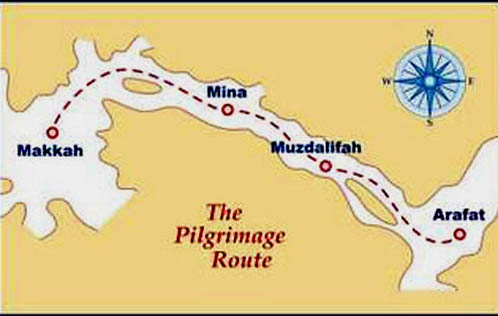 Eid al-Adha is celebrated annually on the 10th day of the 12th and last Muslim month of Dhu al-Hijjah of the lunar Islamic calendar. Celebrations start after the Hajj, when Muslims descend from Mount Arafat. Arafat Day this year falls on Saturday, November 5. 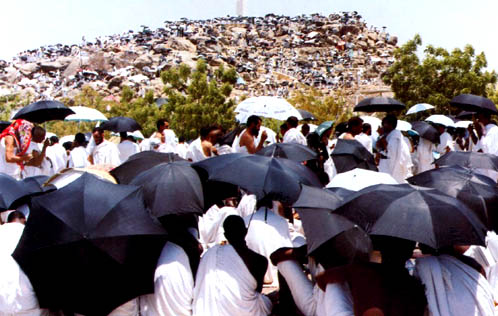 Mount Arafat, about 70 meters high, is a granite hill to the east of Mecca. It was on Mount Arafat that Adam and Eve, separated for 200 years following their expulsion from the Garden of Eden, recognized each other and were reunited. There too God forgave them for their transgression. It is where pilgrims must spend an afternoon in a state of Ihram.

It is professed that when Abraham was ready to return to Canaan he was to leave behind his wife Hajar and baby son. Hajar asked him, “Did God order you to leave us here? Or are you leaving us here to die.” Abraham was so sad he fell silent but pointed to the sky. Hajar said, “Then God will not waste us; you can go.”

Soon Hajar’s meager provisions of dates and water ran out and both mother and child became thirsty. Hajar was desperate to find water. She ran up and down between two hills — Al-Safa and Al-Marwah — seven times in her desperate quest. Exhausted, she finally collapsed beside her baby and prayed to God for deliverance. Miraculously, a spring of water gushed forth from the earth at the feet of baby Ishmael. With this secure water supply, known as the Zamzam Well, they were not only able to provide for their own needs, but were also able to trade water with passing nomads in exchange for food and supplies.Years later, Abraham was instructed by God to return from Canaan to build a place of worship adjacent to Hajar’s well. Abraham and Ishmael constructed a stone and mortar structure — known as the Kaaba. It was to be the gathering place for all who wished to strengthen their faith in God.

One of the main trials of Abraham’s life, at 99, was to fulfill God’s command to devote his dearest possession, his only son Ishmael, then 13.

Upon hearing this command, he prepared to submit to God’s will. During this preparation, Satan tried to dissuade Abraham and his family from carrying out God’s commandment, but they drove Satan away by throwing pebbles at him. In commemoration of their rejection of Satan, stones are thrown at symbolic pillars signifying Satan during the Hajj rites. 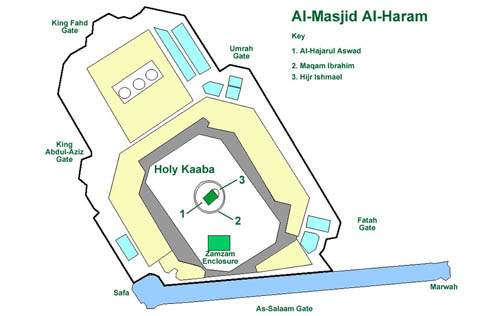 Ishmael married the daughter of the chief of the Banu Jurhum, a tribe that had settled in the Mecca valley. When Abraham died, Ishmael continued to perform Hajj each year and to look after the Kaaba. After Ishmael, the Kaaba came into the possession of the Banu Jurhum tribe for many centuries until the Khuza’ah tribe took it over. Throughout this period, the Kaaba was vulnerable to flooding and was virtually destroyed.

Seeing the Kaaba in a state of disrepair, Qusay bin Kilaab (born around 400 CE), of the Quraysh tribe, rebuilt it, according to the original design but he added a roof to protect it from the extremes of weather.

The starting point for the circumambulation of the Holy Kaaba is where Abraham placed the Black Stone in the eastern corner. The Black Stone (al-Hajar al-Aswad) was brought from Paradise by Archangel Gabriel and was set into one corner of the Kaaba.

In the course of their Hajj, pilgrims will kiss or touch the Black Stone because the Prophet Mohammad (PBUH) kissed it. On the roof of the Kaaba is a gilded waterspout (al-Masabb) protruding from the northwestern wall.

To complete the upper part of the Kaaba walls, Abraham stood on a large stone block, which he moved along when each section was completed. When the Kaaba was finished, the large stone block was left outside, close to the eastern wall of the sanctuary. It became known as the Maqam Ibrahim (the station of Abraham).

Nearly opposite the Black Stone, near the Maqam Ibrahim, is the Zamzam Well.

The Kaaba is a large stone structure constituting a single room with a marble floor. It lies at the heart of the Holy Mosque (al-Masjid al-Haram). It stands some 60 feet high and each side is approximately 60 feet in length. The four walls of the Kaaba are covered with a black drape that is 45×135 feet — the Kiswah.

Every year, a new Kiswah is prepared, embroidered in gold thread with the Shahadah and verses from Qur’an and carried to Mecca by pilgrims. A recent estimate of annually producing the Kiswah put the cost at about $4.5 million. During the Hajj, the black Kiswah is replaced by a white cloth, matching the white robes of the pilgrims. At the end of Hajj, the newly woven Kiswah is placed over the Kaaba. The old one is cut into small pieces and given to pilgrims from different Muslim countries.

As Nada’s sister joins the more than 1,222,474 pilgrims in Mecca (as at October 26), I wish all my readers celebrating the occasion a happy and blessed Eid al-Adha.

(Credit for the photos goes to the Ministry of Hajj)