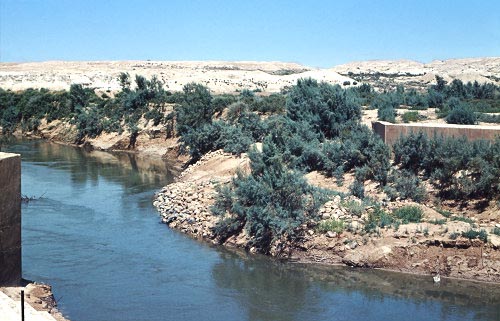 Thousands of pilgrims flocked this week to Israel’s latest tourist attraction, touted as the place where Jesus was baptised in the River Jordan.

Visitors to Qasr al Yahud, in the Jordan Valley, received an unusual welcome, however. They had to pass through a fenced-off corridor warning that landmines surrounded them on all sides.

At the river’s edge, they were watched over by armed Israeli soldiers in watchtowers with orders to stop anyone trying to cross the short stretch of water that marks the border with Jordan.

Some 15,000 pilgrims arrived at Qasr al Yahud on Tuesday to celebrate the Feast of the Epiphany – when Orthodox Christians traditionally mark Jesus’ baptism – despite a warning from a local landmine action group that the site could be dangerous.

Like many other religious sites in the Holy Land, Qasr al Yahud already attracts more controversy than brotherly love.

Israeli government ministers who were due to attend the celebrations cancelled their participation at the last minute after it was decided to postpone the site’s official opening until next month.

The delay came after the leaking to the Israeli media last week of a letter from the tourist minister, Stas Meseznikov, warning that opening Qasr al Yahud with too much fanfare could inflame regional tensions with Jordan and the Palestinians and upset the international community and churches. He said the site could rapidly turn into a “bone of contention”.

With competition intense for the tourist dollars of Christian pilgrims coming to the Holy Land, Jordan has been developing its own site around the location of Jesus’ reputed baptism. Known as Wadi Kharrar, it is on the opposite bank of the River Jordan from Qasr al Yahud. It now attracts 800,000 visitors a year.

Mr Meseznikov said he preferred to increase tourism at the location quietly.

He is reported to be opposed by Silvan Shalom, the regional development minister. On a recent trip to Qasr al Yahud, Mr Shalom said the government hoped the Israeli-developed site would soon challenge Jordan’s success, particularly by appealing to Eastern Europe’s large Orthodox Christian population.

Israel has spent more than US$2 million (Dh7.3m) renovating the area. Avner Goren, an archaeologist for the tourism ministry, said Israel’s long-term goal was to attract more than a million pilgrims a year to Qasr al Yahud.

A source in the ministry, who asked not to be named, said that many government officials were fearful that, if Israel did not “liberalise” its policy at Qasr al Yahud, Jordan’s claim to the baptismal site would eventually win the Christian world’s blessing.

Pope John Paul II visited the baptism sites on both sides of the river on his tour of the Holy Land in 2000. His successor, Benedict XVI, however, visited only the Jordan side in 2009.

The Israeli decision unilaterally to develop Qasr al Yahud has been sharply criticised by Palestinian officials, who point out that the area is located in the West Bank, only a few kilometres from the Palestinian city of Jericho.

Under the Oslo accords, Qasr al Yahud falls in so-called “Area C,” which is territory under full Israeli military control. But Palestinians expect the Jordan Valley to be part of their future state in a peace agreement.

Gerias Kumsiyeh, a spokesman for the Palestinian Authority’s tourism ministry in Ramallah, said Qasr al Yahud’s opening had been undertaken without the co-operation of Palestinian officials.

“This important site is occupied by Israel and is being developed unilaterally by them. The extra tourists will benefit Israel’s tourism industry but won’t help the Palestinian economy,” he said.

Israel angered Palestinian officials last year by declaring two locations in the West Bank – Rachel’s tomb, next to Bethlehem, and the Tomb of the Patriarchs in Hebron – as Israeli “national heritage sites”.

Despite the importance to some Christians of the baptismal site, close to where the River Jordan empties into the Dead Sea, decades of the Arab-Israeli conflict have overshadowed efforts to develop it.

The army declared the River Jordan a closed military zone in 1967 and later laid mines along much of its length to deter “infiltrators” from Jordan, both Palestinian refugees seeking to return to their homes in the West Bank and Arab fighters trying to launch attacks.

The Israeli army said it had removed 8,000 landmines in the Jordan Valley last year and that the Qasr al Yahud area was entirely safe.

But Dhyan Or, the Israel director of Roots of Peace, a global advocacy group opposed to landmines, said half a million remained in the Valley. He added that mines could drift from fenced-off areas during storm-floods, putting worshippers at risk if they strayed off marked paths.

Faced with the problems at Qasr al Yahud, the Israeli tourism ministry has for many years offered an alternative baptismal site on the River Jordan known as Yardenit, inside Israel and a few hundred metres south of the Sea of Galilee.

Although a popular stop for pilgrims who want a full-body immersion, the site has been recognised by neither Biblical scholars nor the main Christian denominations.

Attention has focused instead on an ancient crossing point on the river 40km further south, where John the Baptist is believed to have preached. The site is marked on the oldest map of the Holy Land: a sixth-century floor mosaic in Saint George’s church, close to the town of Madaba in Jordan.

Remains of early churches have been found on both banks of the River Jordan at the site. Qasr al Yahud also has nearby a largely complete fifth-century Greek Orthodox monastery dedicated to John the Baptist.

Jordan, unlike Israel, rushed to develop the area after the signing of a peace agreement between the two countries in 1994. It demined Wadi Kharrar and King Abdullah, Jordan’s ruler, donated land to various Christian denominations to build churches close by.

Middle East Friends of the Earth have warned that both Qasr al Yahud and Wadi Kharrar are unsuitable as baptismal sites because of severe pollution in that stretch of the River Jordan.

He said the flow of the river had diminished by 98 per cent in recent decades because Syria, Jordan and Israel had diverted feeder streams for agriculture.

Given the meagre flow of water, tourists on both sides of the river are able to call out to each other.

Mr Meseznikov has made the growth of Christian tourism a top priority. Rates were up last year to a record 3.4 million visitors, two thirds of them Christians. The government has set a target of 5 million visitors by 2015.