Muslim Guidebook: How to Deal with Christmas 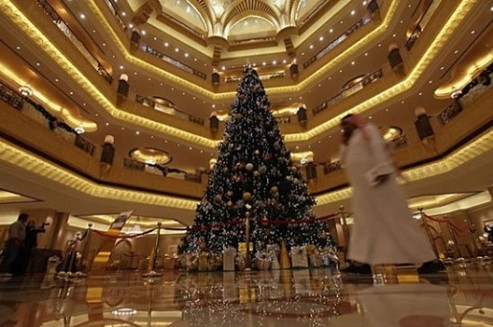 Around this time last year, as a Muslim community, we held our monthly interfaith event with a local rabbi and priest.  The topic was holidays. The rabbi spoke about Hanukkah, the Festival of Lights, which is about the traditional Jews taking back the Holy Temple from the Hellenistic Jews in the second century. He went on to explain that this is not a scriptural holiday; it was a celebration founded by their Rabbis and incorporated into the Jewish calendar. He also noted that the Jewish calendar is just like the Islamic calendar in that it is based upon the lunar phases. When I inquired into how Hanukkah always falls in December, he explained that at some point the rabbis also decided – not because of clear text but as a rabbinical inference – that they must add a leap year to the Jewish lunar calendar to keep up with the solar-based Gregorian calendar.

Similarly, the priest explained that Christmas is not something taught by the Bible, nor do any Christian historians believe that December 25 was the birthday of Jesus (peace be upon him). To the amazement of most of those present, the priest went on to admit the true origin of Christmas, which is a result of the compromise the Catholic Church made in trying to assimilate Christian doctrine into the Roman empire. They took the festival celebrating the birth of the son-god Mithra, who is related to the sun-God Shamas (notice son/sun god), and switched it to celebrate the birth of Jesus (pbuh). Add Santa Claus and his flying reindeer and we have a whole slew of lies surrounding this celebration.

Christmas is still rejected by many puritanical Christian groups as a Catholic innovation and a compromise between paganism and Christianity. It was banned by the protestant movement in England in the seventeenth century; the early Americans also rejected it for its pagan roots.

By the time it was my turn to speak, I was on a rush of faith when I explained Eid al-Adha and what it’s about and how it is in complete accordance with the preserved scriptures and has always been the same and will always be. With all due respect to our brothers in humanity from the people of the book, they are plagued with the lies and corruption of men. The corruptive elements of religious innovation have been a disaster for those who received scripture before us. This is clear through the period of Hellenism and Rabbinical edicts in the history of Judaism as well as the changes Christianity underwent as a result of the mixing of the Roman Empire and the Nicene pronouncement of Christian dogma in the 4th century CE.

This is a result of the test that God placed upon their shoulders in the following verse,

“Indeed We sent down the Torah which was filled with guidance and divine light. The Prophets who submitted to God judged the Jews by it as did the rabbis and priests as they were entrusted with the book of God and were made witnesses thereof…” (Quran, 5:44)

This verse means that the previous nations were made responsible for not only follow the teachings as they were revealed, but to also preserve the scripture. Historically we see they have had a very hard time with both of these tests. The final revelation which will have no prophets or scripture revealed after it has been preserved by Almighty God as it says in verse 9 of soorah al-Hijr. That being said, we were also tested with preserving the authentic application of our scripture with the following verses,

“Whoever opposes the messenger after guidance has been clear to him and follows a path other than that of the believers will be made responsible for his choice and we will burn him in the Hellfire…” (Qur’an, 4:115)

“The first forerunners in faith from among the Muhajireen and the Ansar and those who followed them to the best of their ability have the pleasure of God upon them and they are pleased with Him.” (Qur’an, 9:100)

The Prophet has clearly said in a narration that has been transmitted in many of the soundest chains of narration, “Whoever introduces something in this affair of ours that which is not from it will be rejected.” (Bukhari)

This hadith is understood to mean that – other than what the Prophet practiced – it is forbidden to introduce new ritual worship as a standard done at specific times and in specific manners. Some Muslims claim that we believe in Jesus and therefore to celebrate his birth is good. It is just a matter of intentions since we obviously don’t believe that he was God incarnate or the literal son of God. The problem is that to celebrate his birth is showing reverence to a Prophet which is a form of worship which can be done at any time according to any manner whether reading verses, hadith or poetry about him or otherwise holding random events. The problem is in setting a certain day for it very year thus it becomes an innovation.

He also said, “Whoever imitates a people is one of them.” (Abu Dawood) This text is understood as a general reality, but in the context of religious worship it becomes a condemnation if in fact a Muslim is imitating other religions in their religiously symbolic dress, worship or festivities. So some Muslims say well I will just get a tree and lights and celebrate the folklore secularized portion of it which doesn’t have to do with Christian worship. The problem is that the two are interconnected and part of the same thing and societal custom generally assumes that if you are taking part in one part of the secularized side of it then you are also involved in the other thus why the vast majority of Jews and Buddhists don’t take part in any Christmas festivities. The fact is that this day is celebrated as the day they believe God was born into a man named Jesus and millions of Christians worship him on that night every year. If you are not convinced by that then as a Muslim you should at least be concerned about teaching your child a lie about Santa Claus that will crush his heart when he comes to know the truth later (I know from personal experience).  In the end it is an identity issue and we need to preserve our own identity.

This brings us to the most important point of this article. How do we deal with this bombardment of the Christmas culture her in the west?

This article is published courtesy of SuhaiWebb, a site is dedicated to enhancing the spiritual and religious development of Muslims through sound, balanced & moderate Islamic teachings.

Yahya Ederer was born and raised in Oklahoma. After four years of being involved with a delinquent clique of hustlers and hip-hoppers, he began searching for spirituality. In 1998, after researching philosophy, comparative religion and psychology, he found solace and soul nourishment while reading a translation of the Qur’an, which led him to accept Islam as his way of life. In 2002, he was offered a scholarship with Islamic American University where he began his journey of seeking sacred knowledge on a full-time basis. Since then, he completed the sixteen level program at Al-Diwan center in Cairo resulting in a certification by the Ministry of Education in Egypt on the mastery of Arabic. He spent close to four years in Kuwait as head of the English Department for the Islam Presentation Committee. While in Kuwait, he studied with a few scholars two to three times a week, focusing on Hanbali Fiqh and Usool. He also attained a diploma from the Islamic Institute of Kuwait and a license in Qur’anic Memorization and recitation according to Hafs on the authority of Asim by way of Tayyibah. He currently resides with his wife and two sons in Sunrise, Florida where he is the Imam of the Islamic Foundation of South Florida. He has also written for SuhaiWebb in the past under the alias Abu Majeed.