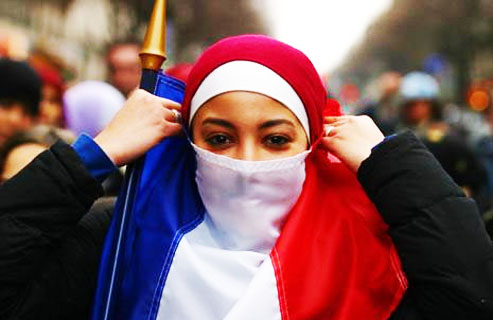 I was invited to Qatar earlier this month to take part in a prestigious Doha Debate on the subject of my country’s recent burqa ban. This was especially significant to me as a young Muslim woman who was born and raised in France and who has written extensively about Arab and Muslim issues in the media.

The Doha Debates are a forum for free speech in Qatar and tackle some of the world’s most controversial and topical issues by having two speakers for and two speakers against a motion, with a final audience vote.

The subject tackled this time, the burqa ban, is an extremely important one for Muslim-Western relations, and the Doha Debates forum is arguably the ultimate platform to air views on the subject. Organised by the Qatar Foundation, the Debates are broadcast by a number of television stations, including BBC World News, and can have an audience of more than 300 million viewers across 200 countries.

The live audience at the television studio where we filmed was probably equally split between Muslims and non-Muslims who came from Middle Eastern and European countries.

Speaking in favour of the motion that “France is right to ban the face veil” was Jacques Myard, a senior member of the ruling conservative Union for a Popular Movement (UMP) party in France and a close ally of French President Nicolas Sarkozy. Myard is often described as the architect of the burqa ban because he led the bill to the parliamentary committee which then recommended the burqa be banned.

Debating alongside Myard was Farzana Hassan, a Canada-based writer and women’s rights activist whose family is originally from Pakistan.

In the opening debate, Myard made it clear that his country was a secular one. He added that “As far as the majority of French people is concerned, the face veil means reducing women to an inferior status. Those who refuse to show their faces in public are excluding themselves from the national community.”

Hassan, meanwhile, argued that some people have committed suicide bombing and bank robberies while wearing the face veil, essentially cautioning that the burqa has public safety implications. She also argued that the burqa is antithetical to Islam as it degrades the position of women.

I debated in favour of the opposing view – that France does not have the right to ban the burqa. In my response, I made it clear that I was always brought up to respect other people in the French Republic, which is a democracy, not an autocratic, intolerant country.

To me, the ban has nothing to do with unity, but is instead aimed at stigmatising a small group of women, as well as their Muslim community.

Indeed, it is my firm belief that the arguments used to support the ban have no clear foundation: there are never any statistics offered to link the burqa with threats to public safety. Furthermore, a secular state does not exclude personal religious devotion. The first article of the French Constitution ensures that the secular republic “shall respect all beliefs”. For me, this is the context in which the burqa ban should be placed.

What I am opposed to most, however, is the argument that men force women to wear the burqa. There is no evidence for such oppression. Besides, the idea that a malevolent man would stop his abuse because his victim can’t wear a full veil in public is illogical.

Also opposed to the motion at the Debates was Mehdi Hasan, senior political editor of the London-based New Statesman magazine. Hasan argued that those who wear the burqa in France make up a very small number of women, and that preventing them from wearing what they want would make them feel even more alienated from mainstream French society.

At the end of the debate the studio audience was asked to vote using electronic touch pads. My team defeated the motion by 78 per cent — one of the highest margins in the history of the Doha Debates.

Despite the obvious divergence in opinions over the burqa ban, both sides made it clear that their paramount aim was a safe, secure society in which all its members could achieve their potential as equal citizens.

It was a fascinating night, and showed exactly how civilised debate can elucidate arguments in a deeply contentious issue. Though we might not have had an impact on French policy, the debate demonstrated that people do not necessarily need to agree with each other in order to appreciate that there is another side to every argument. I truly believe that open dialogue and peaceful disagreement can also help promote greater understanding.

Nabila Ramdani is a Paris-born journalist living in London and winner of the inaugural European Muslim Woman of Influence (EMWI) Award 2010.