Challenging Thinking: What is the Kaba? 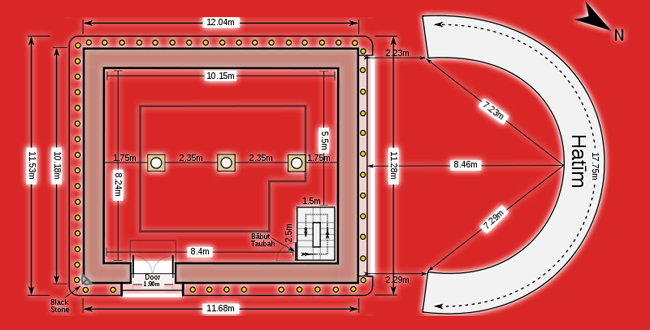 When I run into non-Muslim westerners in Saudi—particularly those who have fallen for the paranoia over Islam so prevalent in the West,  I do not address the insanity of their rhetoric.

I merely ask one question; having little to do with their world view they seem so infatuated with; so dead set on believing.

The question I ask is: “What is the Kaba?”

Usually there is a pause and some murmuring about the direction Muslims worship.

“It’s in Mecca, right?”, someone may assert rhetorically. The response may warrant a congratulatory ‘that’s right,’ because it is usually more than most of those from outside the Muslim faith know, those wandering around the compounds that litter the Saudi business landscape.

“..But what is it?” Generally this is met with another profound but brief silence I break with another question.

“You know in Genesis, when Abraham and his son go and build a house of worship for God?”

Although seldom depicted in the numerous Christian themed Hollywood films, most Christians are familiar with it; so most of the time I get a nod or two by those listening.

There is generally another period of silence before I add: “You can walk up to it and touch it.”

“Mecca was built around it and many Arabs can trace their lineage back to Abraham and then back to Adam.”

I usually leave it at that because people can only take so much.

It makes you wonder why no one mentions it in those ‘Welcome to Arabia’ guides with their extensive lists of what not to do, lists apparently is designed to keep people from wondering off their compounds.

I know for many what I have just said is the equivalent of saying the Easter Bunny exists and that you can prove it. Secularism, the belief of unbelief is hinged on the notion that there is no actual physical evidence of religious history; that it must all be taken as some sort of rationalization, an exercise in wishful thinking.

Why  isn’t evidence like the Kaba studied and taken seriously with at least as much scholarly fervor as Greek and Roman myths in the west? Scholars read Homer but haven’t reflected on a book (The Quran) that talks about the structure of the universe and how it was created (the big bang); how babies are formed in the womb; how sex is connected to procreation and that the earth is round over 14 centuries before the so called ‘modern’ European civilization stumbled from slumber.

Instead they teach us western civilization emerged (as Carl Jung might postulate), evolving from the myth of religious belief which he and Freud surmised from the treatment of neurotic Victorian women, a way for man’s primordial self to deal with mental conflict and make sense of the world.

Maybe “God is dead” – or better yet, he doesn’t exist so some one can make up his own rules. If there is no here-after or reward, being ‘good’ is at best unrealistic.

Moral righteousness can be considered the immature calculations of the stupid. ‘Right’ (we are shown) is he who has the biggest gun, the most wealth or the most followers.

Don’t forget that secular governments emerged when the church and king ‘setup’ were debunked by the French Revolution. If God wasn’t some manifestation that involved some sanguine affiliation with their ruling class, he didn’t exist. With their cover blown, they had to come up with better means to control the herd. Once the divine intermediary system was abolished (via guillotine), those in charge replaced the fear of god with the fear of man.

But suppose you could prove the fairy tale is true? Wouldn’t you serve your creator with absolute resolve like those so called nut-job Muslims?

So, what is the Kaba?

9 Responses to Challenging Thinking: What is the Kaba?