On being a Muslim: One size does not fit all 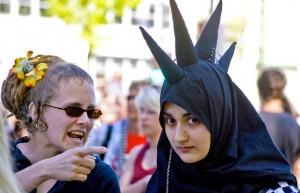 Recent marketing and advertising research concludes that ‘Muslims are diverse’. Why can’t Muslims be of the same opinion?

In the political, social and religious spheres, there are plenty of labels to define what kind of Muslim you are.  Are you a moderate or a fundamentalist? A Sufi or a Salafi? A progressive or a conservative?

More often than not, a Muslim will be defined by how outwardly pious they appear – how long is his beard, how expansive is her head-covering – as though a Muslim is defined on one axis only. Such lazy and judgemental labelling has prevented us from seeing the human aspirations, motivations and even foibles that make up the great mosaic of the global Muslim nation.

So when two of the world’s largest marketing and advertising agencies commission research into better understanding Muslim consumers, it is a good time to ask ourselves: can the commercial world get past these labels and help us gain better insight into the attitudes, diversity and aspirations of Muslims?

JWT’s aim was to identify the common values at the core of the Muslim market. Five segments emerged. It is worth noting that no segment is more or less merit worthy in terms of humanity.

‘Social Conformists’ (19%) believe social norms should be adhered to even at the cost of personal choice. They lack self confidence and rely on others for decisions. They are not religious and feel positively about Western values.  ‘Religious Conservatives’ (17%) follow and expect others to follow religious practices, which always override personal choice. They are anti-media and information averse. They support gender segregation. ‘Pragmatic Strivers’ (24%) are non traditional and ambitious, open-minded and willing to compromise on religious values in order to get ahead. ‘Extreme Liberals’ (21%) are independent and assertive and not particular about tradition or religious practices. They will explore options even if they don’t conform to religious or societal norms. ‘New Age Muslims’ (19%) are traditional and religious but do not expect others to be so. Whilst religious, they believe in gender equality, are pro-media and pro-Internet.

Ogilvy & Mather Worldwide published their report earlier this year, and have even set up a specialist Islamic branding and marketing agency. The CEO made an interesting remark about how piety is often confused with understanding the state of being Muslim: “While segmentations of Muslim consumers have been attempted before, they have often tended to merge into relatively simple scales of devoutness in terms of adherence to Islam on a scale of liberal to conservative. It seems more profound to look instead through the lens of the role that religion plays in their lives.”

The research identified six segments.  The ‘Connected’ (27%) who see themselves as part of the web-like network of the Ummah, saying ‘religion connects me’. Technology is positive, and compassion ranks highly. The ‘Grounded’ (23%) say ‘religion centres me’: Islam is their anchor, religion and culture are inseparable. They seek peace and closeness to God. The ‘Immaculates’ (11%) say ‘religion purifies me’ are younger, seek discipline and perfection, and may incline towards rejecting the impure. These three segments have a more ‘Traditionalist’ mindset; a desire for harmony and belonging; quietly proud of their faith; aligning with values of tolerance and compassion.

The remaining three segments were noted as of key importance in influence, labelled as the ‘Futurist’ mindset who see themselves as steadfast followers of Islam in a modern world. They are individualists who ‘choose’ Islam. Their pride is intense, regardless of the extent to which they would be categorised as ‘devout’. They believe in education and question intention. ‘Identifiers’ (27%) wear Islam with pride: ‘religion identifies me’ and want it strengthened and defended. The ‘Movers’ (6%) say ‘religion enables me’. They are internet savvy and act as change agents. The ‘Synthesizers’ (6%) are pragmatic, and adapt religious practice to their needs saying ‘religion individuates me’.

If we are to take any first insights from these commercial models, it is to learn that the aspirations and motivations of Muslims are not homogeneous, and Muslims should not be judged in a one-size-fits-all fashion. Muslims have complex and varying motivations, and yet their religion still informs what they do.

Muslims expect others to recognise and respect Muslim diversity. Such research highlights this, and if anything the immediate next step is to hope that we can learn to apply the same level of complexity to how we as Muslims ourselves see other Muslims, rather than just judging them by how pious they ‘appear’ to be.

Surprisingly, such commercial research may help us better understand our co-religionists, and what motivates and inspires them.

This article was first published in November’s edition of EMEL Magazine.