A Woman’s Reflection on Leading Prayer 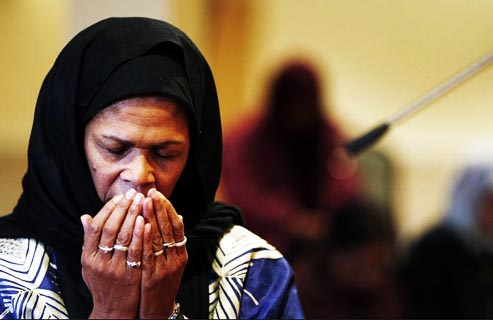 On March 18, 2005, Amina Wadud (pictured above) led the first female-led jum`ah (Friday) prayer.  On that day, women took a huge step towards being more like men. But did we come closer to actualizing our God-given liberation?

I don’t think so.

What she didn’t recognize was that God dignifies both men and women in their distinctiveness – not their sameness. And on March 18, Muslim women made the very same mistake.

For 1400 years there has been a consensus of the scholars that men are to lead prayer. As a Muslim woman, why does this matter? The one who leads prayer is not spiritually superior in any way. Something is not better just because a man does it. And leading prayer is not better, just because it’s leading. Had it been the role of women or had it been more divine, why wouldn’t the Prophet have asked Ayesha or Khadija, or Fatima—the greatest women of all time—to lead? These women were promised heaven—and yet they never led prayer.

But now, for the first time in 1400 years, we look at a man leading prayer and we think, “That’s not fair.” We think so although God has given no special privilege to the one who leads. The imam is no higher in the eyes of God than the one who prays behind.

On the other hand, only a woman can be a mother. And God has given special privilege to a mother. The Prophet taught us that heaven lies at the feet of mothers. But no matter what a man does he can never be a mother. So why is that not unfair?

When asked, “Who is most deserving of our kind treatment?” the Prophet  replied, “Your mother” three times before saying “your father” only once. Is that sexist? No matter what a man does he will never be able to have the status of a mother.

And yet, even when God honors us with something uniquely feminine, we are too busy trying to find our worth in reference to men to value it—or even notice. We, too, have accepted men as the standard; so anything uniquely feminine is, by definition, inferior. Being sensitive is an insult, becoming a mother—a degradation. In the battle between stoic rationality (considered masculine) and selfless compassion (considered feminine), rationality reigns supreme.

As soon as we accept that everything a man has and does is better, all that follows is a knee-jerk reaction: if men have it, we want it too. If men pray in the front rows, we assume this is better, so we want to pray in the front rows too. If men lead prayer, we assume the imam is closer to God, so we want to lead prayer too. Somewhere along the line we’ve accepted the notion that having a position of worldly leadership is some indication of one’s position with God.

A Muslim woman does not need to degrade herself in this way. She has God as a standard. She has God to give her value; she doesn’t need a man.

In fact, in our crusade to follow men, we as women never even stopped to examine the possibility that what we have is better for us. In some cases we even gave up what was higher only to be like men.

Fifty years ago, society told us that men were superior because they left the home to work in factories. We were mothers. And yet, we were told that it was women’s liberation to abandon the raising of another human being in order to work on a machine. We accepted that working in a factory was superior to raising the foundation of society—just because a man did it.

Then, after working, we were expected to be superhuman—the perfect mother, the perfect wife, the perfect homemaker—and have the perfect career. And while there is nothing wrong, by definition, with a woman having a career, we soon came to realize what we had sacrificed by blindly mimicking men. We watched as our children became strangers and soon recognized the privilege we’d given up.

And so only now—given the choice—women in the West are choosing to stay home to raise their children. According to the United States Department of Agriculture, only 31 percent of mothers with babies, and 18 percent of mothers with two or more children, are working full-time. And of those working mothers, a survey conducted by Parenting Magazine in 2000, found that 93% of them say they would rather be at home with their kids, but are compelled to work due to ‘financial obligations.’ These ‘obligations’ are imposed on women by the gender sameness of the modern West, and removed from women by the gender distinctiveness of Islam.

It took women in the West almost a century of experimentation to realize a privilege given to Muslim women 1400 years ago.

Given my privilege as a woman, I only degrade myself by trying to be something I’m not – and in all honesty – don’t want to be: a man. As women, we will never reach true liberation until we stop trying to mimic men, and value the beauty in our own God-given distinctiveness.

This article comes courtesy of SuhaiWebb.com,  a site is dedicated to enhancing the spiritual and religious development of Muslims through sound, balanced & moderate Islamic teachings.