“Religion for God, Egypt for All”: Interfaith Success 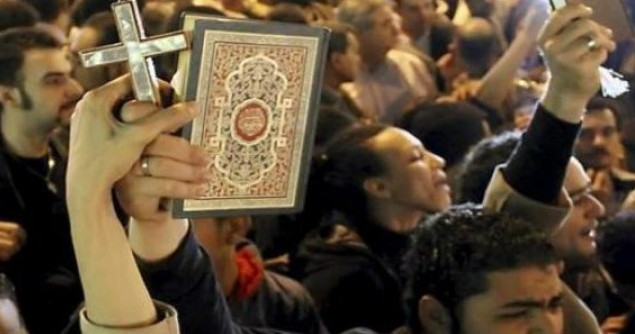 Despite the state of uncertainty that encircles the future relation between Copts and Muslims, exemplified by the withdrawal of church representatives from the Constituent Assembly on 16 November, current collaboration between Egyptian Muslims and Copts provides reasons to be optimistic about the future of co-existence in Egypt.

Perhaps the most notable example of this collaboration is the Family Home Initiative. In response to the bombing of the Two Saints church on the eve of 2011, Sheikh Ahmed El-Tayeb, the Grand Imam of Al-Azhar, launched the Family Home Initiative welcomed by former pope of the Orthodox Church Shenouda II. The “family home” in Egyptian culture refers to one’s grandparents’ house, where family members meet to celebrate feasts and weddings, share sorrow and settle quarrels. Al-Azhar’s initiative seeks to build on this familial spirit.

The Family Home Initiative officially began in July 2011 after its charter was approved by the former Prime Minister Essam Sharaf. This entity is jointly headed by the Grand Imam and the Pope of the Orthodox Church and its board of trustees comprises clergymen from Al-Azhar and Orthodox, Evangelical and Catholic churches, as well as known public figures.

The ultimate aim of the initiative is to unmask the underlying reasons for sectarianism and to work towards creating a foundation for peaceful co-existence between Muslims and Christians without delving into dogmatic differences. Nasr Farid Wasel, former Grand Mufti of Egypt, summed up this mission in seven words: “Religion for God, and Egypt for all”.

The initiative aims to carry out awareness campaigns in which mainstream, tolerant religious discourse is broadcast. The initiative holds emergency meetings with local priests, imams, mayors and chiefs of police after any sectarian dispute, in order to resolve them peacefully and to pre-empt future incidents.

Furthermore, the Family Home Initiative took it upon itself to urge the government to endorse a law that regulates the construction of churches and deepens the constitutional provision of principles of citizenship for all Egyptians. The initiative also submitted recommendations to the government to rid school curricula of any religious prejudices. The home board proposed the idea of curriculum that teach concepts rather than memorising religious verses.

Tolerance Train is another example of a peaceful co-existence campaign. The Tolerance Train initiative brings groups of youth of different faiths together to travel to many of Egypt’s governorates to promote tolerance. The campaign was launched in May 2011 under the slogan: “Tolerance is the cornerstone of healthy democracy”. At each stop, youth meet Christian and Muslim clerics, visit religious sites and hear from laymen about their views and ideas to avoid sectarianism. The whole journey is filmed and uploaded on a blog that carries the campaign’s name. In 2011, campaign leaders were honoured by the Friedrich Naumann Foundation.

Efforts to mitigate sectarianism are not solely confined to the official and national levels.

Another initiative, Coptic Orphans, a non-profit organisation founded by a Coptic immigrant to the United States, launched the “Valuable Girl Project” in 2003.

This project targets girls in high poverty areas across Egypt and enrols them in mentoring programs. The programme has attracted international attention for its support of all girls in need of it, regardless of religion. It is modelled after the Big Sister concept, pairing one Muslim girl and one Christian girl with each big sister. Big sisters are trained to be role models and help younger girls with their school homework and academic activities.

Participants recognised notable improvement in their school marks. One of the Muslim girls reported that she had had a negative impression about the program, but after joining she found out that there is no difference between Christian and Muslim girls and that both of them encounter a common challenge in a society that devalues the importance of their education. This philanthropic project is unique as it aims to change people’s thinking and doesn’t stick only to traditional charity.

Egyptians are at the crossroads in history, the revolution makes it imperative that dialogue that leads to greater understanding is pursued.

Magdy Aziz Tobia is an Egyptian Diplomat, member of the Egyptian Delegation to the Arab League as well as a Masters student studying Anthropology at Cairo University.

2 Responses to “Religion for God, Egypt for All”: Interfaith Success