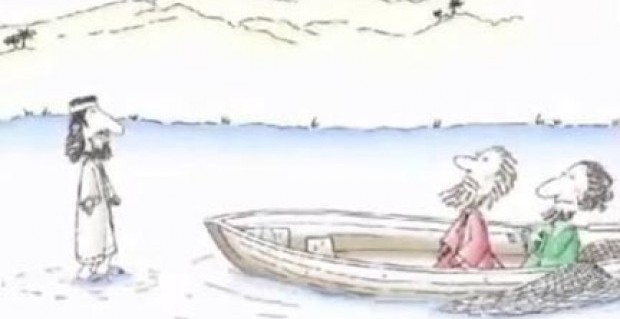 There are a number of issues on which Christians and Muslims agree, despite the historical antagonism that Islamophobia and Sectarianophobia perpetuate. For example, boycotting the power drink “Red Bull” in South Africa. A recent ad showed Jesus walking on the water after he drank “Red Bull”, stepping gingerly on the rocks that he could see beneath his feet in the water. The only miracle was in the drink, if you follow the ad.

While the advertisers did not expect people to take the ad literally, gulp down their “Red Bull” and promenade without their water skis, the premise of the ad indeed denies the miracle, a denial that many Christians accept post-Hume with little problem. As reported in The Washington Post and picked up by a number of Muslim media outlets, such as Cii, South Africa’s Roman Catholic hierarchy told the faithful to give up “Red Bull” for Lent. And then, South Africa’s Muslim Judicial Council, in solidarity, joined the boycott by saying that an affront to the Prophet Issa (Jesus) is an affront to Muslims.

From the Catholic perspective, at least one that focuses less on “turn the other cheek” and more on “Get thee behind me, Satan,” the moral outrage is understandable. Think of a possible amendment to the catechism as follows:

Question: “What would Jesus do if a television commercial made fun of his miracles?
Answer: “If you believe that Jesus walked on “Red Bull”, then render unto “Red Bull”, but if you believe Jesus walked on water, then don’t drink this whited sepulcher of a beverage during Lent. Remember that at the wedding in Cana Jesus turned the water into wine, not “Red Bull.”

Although I have not found any specific news accounts, I suspect that the Bible-believer missionaries will forego “Red Bull” as well, even if they don’t hold fast to the Lenten fast.

But the fact that a major Muslim organization in South Africa has joined in condemnation of the ad is a cautious welcome sign, no matter what you think of the ad itself. I am not sure the council is claiming that “Red Bull” is not halal (they have uncertified the halal status of a “curry den” in Somerset West). The rationale is that denial of the miracles attributed to Jesus is no different than denying the divine messenger status of Muhammad. In part this is no doubt in recognition that Pope Benedict, clearly no great lover of the sibling faith, condemned the Danish cartoons that made fun of Muhammad. Despite doctrinal differences, Catholics, Muslims and Evangelicals all have common cause in defending the revelatory nature of their faiths.

I say this is a cautious welcome sign, because I welcome the fact that competing devouts are in agreement rather than hurling insults at each other. But the caution is over the nature of the issue. The Jesus of the gospels had harsh words for those who rejected his ministry, but he was quick to forgive and turn the other cheek; he did not even resist his own unfair crucifixion. Likewise an important principle advocated by the Prophet Muhammad is that there is no compulsion in Islam. There is also the gospel advice (Matthew 7:3) of not judging someone else for the mote in his or her eye when there is a beam in your own.

The “Red Bull” commercial is a mote, offensive if taken as a hateful assault on Jesus but clearly meant as a clever advertising ploy to gain attention rather than a Satanic plot to destroy Christianity or Islam. The fact that “Red Bull” practiced commercialis interruptus and pulled the ad shows that the bottom line is getting customers and not hermeneutics. But they are not about to drop the humor that will offend Catholics; just check out this “confession” ad.

There is not likely to be a Papal Bull about this “Red Bull” incident; nor are advertisers likely to avoid playing with biblical tropes to sell their products. Far from being a tempest in a teapot, this has been but a drizzle. But there is still a beam in the eyes of those who condemn (including Islamophobes and devout atheists) what others want to believe when there remains such intolerance within many of the formal structures of both Christianity and Islam. So what do I think Jesus would do? The Jesus that comes across in the gospels (rather than the Pauline makeover or St. Augustine’s confessional model or Calvin’s “eternal damnation” bearer)… that Jesus would probably have a good laugh.