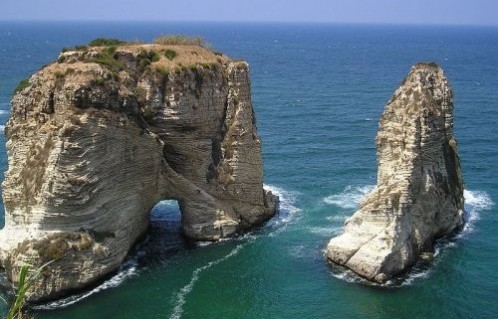 I finally got up close and peppy with one of Beirut’s most recognized landmarks – the Pigeon Rocks.

It’s funny how you can live in a city for years and miss certain notable sights.

I have seen the Pigeon Rocks flying into Beirut from the airplane window, from the Sporting Club beach where I used to and still go swimming, from going past by car. But I never stood right opposite them on the Beirut Corniche to value their size and natural splendor.

To say the truth, my recent three-month stint in Beirut allowed me to go places that were almost out of bounds for me and nearly everyone else when I lived and worked in the city during the civil war. It was unthinkable for instance to stroll on the Corniche in the late Seventies, Eighties and early Nineties.

Raouche is on the Western-most tip of Lebanon. I presume it is a transliteration of “roche,” the French word for rock. It extends the Corniche that encircles the Beirut cape — from the St. George bay to the north, all the way to Ouzai.Situated off the coast in the Raouche neighborhood of the Lebanese capital, the area overlooking the Pigeon Rocks reminds me of the Croisette in Cannes. It gives on the shimmering Mediterranean and is surrounded on both sides by a view of the mountains, their peaks covered by snow in winter. It is a favorite outing for ramblers, joggers and street cart vendors selling different produce in season. And Raouche is dotted with cafés and restaurants looking out on the Rocks.

I hadn’t planned to go to the Corniche on Sunday, but happened to be going past, and couldn’t resist a leisurely walk to get a closer look at the Pigeon Rocks. And what better way to enjoy the scenery than with a good cup of coffee and a bite?

All those sitting at the café were as taken in by the view of the blue sea, the Rocks and the peaks of Mount Lebanon rising to the left. Every now and then an airplane would fly past, and you could just imagine passengers looking out of their windows and thinking, “We’re nearly home.”My cousin Lillian and I sat at the Bay Rock terrace to enjoy the view and the pleasant weather. (You can join us in pictures here.) The only sad sight is of the filthy water, covered by rubbish and foaming hugging the Rocks. Still, that didn’t stop small motorboats from circling and a few swimmers climbing all the way up to show off and win the appreciation of friends and passersby.

There is always a sense of life and energy in Beirut, in whatever area you happen to be, and nowhere more so than on the Corniche’s seaside promenade.

The famous Lebanese author, who was elected to join the prestigious French Academy in June, writes about the fall of Beirut on page 80:It so happened I was reading Amin Maalouf’s “The Crusades through Arab Eyes.” Berytus’ power and glory were destroyed by a triple catastrophe of earthquake, tidal wave and fire in 551 A.D. In 1110, Beirut fell to the Crusaders until 1291, when the Mamlukes conquered it.Sitting at Raouche, enjoying the mezze and Sunday lunch of rice and mutton, I continued to watch the vibrancy of Beirut, a city with a 5,000-year-old past.

The Franj [as the Crusaders are referred to in the book] selected Beirut as their second target. Lying next to the Lebanese mountains, the city was ringed by pine forests, in particular in the suburbs of Mazrat al-‘Arab and Ra’s al-Nabah. There the invaders would find the wood they needed to construct the instruments of siege. Beirut had none of the splendor of Tripoli, and its modest villas could not easily be compared to the Roman palaces whose marble ruins were still scattered across the grounds of ancient Berytus. But because of its port, it was a relatively prosperous city, situated on the rocky slope where, according to tradition, St George had slain the dragon. Coveted by the Damascenes, held negligently by the Egyptians, Beirut finally had to confront the Franj on its own, beginning in February 1110. Its five thousand inhabitants fought with an ardor born of despair as they destroyed the siege towers one after another. “Never before or since did the Franj face such a harsh battle,” [chronicler of the time] Ibn al-Qalanisi exclaimed. The invaders were unforgiving. On 13 May, when the city was taken, they threw themselves into a blind massacre. To set an example.

While reading my book and sipping coffee, I wondered what the Pigeon Rocks must have looked like at the time… When were they formed? Did they exist at the time of the Crusades and how big were they?