Quixotic?: Morocco’s Bid for the Olympics 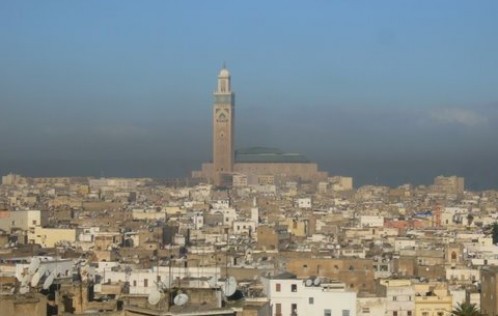 Journalism about Morocco is often a mixed bag. The travel writing tends to lapse into Orientalism and the political analysis is usually shallow or poorly informed.

Most ill-served by journalists is the wonderful city of Ad Dar al-Bayḍa or Casablanca. Often painted as the tired old business hub, or the shabby elderly aunt to the rakish Marrakech or the ugly sister to the alluring and mysterious Fez – Casa can feel a little left out.

So, it was with some trepidation that I followed a link to a Casablanca story and found myself on the pages of Bloomberg Businessweek.

What I discovered was an article by Peter Savodnik, in which he takes a look at the Moroccan Minister of Youth and Sports, Moncef Belkhayat’s, seemingly quixotic bid for Casablanca to become the first African city to host the Olympic Games, in summer 2028. It is an intriguing prospect; but is it for real?

Yes, it is for real. But of course, the story is not new. Back in March, The View from Fez reported similar  remarks by the Minister, who at that time he was unwilling to say which year Morocco would bid for.

Work has already started on a new $300 million (£185 million) state-of-the-art stadium in Casablanca (pictured above) to host the final of the 2015 African Nations Cup, which Morocco was awarded earlier this year.

The Grand Stade de Casablanca is being built in an old quarry and will feature passive solar design with concrete fin-like blades that promote natural ventilation.  Construction on the 80,000 seat stadium is expected to begin shortly and then be completed some time in 2013. The new stadium is due to replace the Stade Mohamed V, which hosted the 1983 Mediterranean Games.

One of the issues that has always bugged Casa is the confusion over the film Casablanca and the way the city can never live up to the Hollywood image. However, as we have reported in the past, Rick’s Cafe, run by the indomitable Kathy Kriger, has enchantingly re-created the image cinema goers are familiar with.

In his Bloomberg article, Savodnik makes a good point about the yawning gap between Casablanca the movie and Casablanca the city. Yet, as he writes…Casablanca’s leaders are hoping the city can claim the Hollywood glory it never had.

They will be aided in that effort by the millions of global cinephiles who know the city only as Michael Curtiz shot it. “We call it the Casablanca Effect,” says Jean Abi Nader, the chief operating officer of the Moroccan government’s lobby-shop in Washington, the Moroccan-American Center. “I’ve worked for a lot of Arab countries and generally, when you say ‘Arab,’ the first thing people think of is camels or sand. So if you say ‘Casablanca,’ and the first thing people think of is the movie, that’s great.” Abi Nader is untroubled by the disconnect between Casablanca and Casablanca. The association “provides a point of departure,” he says. “It’s an opportunity to rebrand.” Local businesses have seized on the association, selling Casablanca-themed tissue boxes or refrigerator magnets and emulating the film’s aesthetic.

The year 2028 is a long way off and, while in the intervening years one could sell a lot of fridge magnets, the future is uncertain. Given the changes under-way in the so-called “Arab Spring” and the many more Arab Springs and Winters between now and 2028; a bid so far out is a brave call indeed.

But Savodnik is on the money when he writes … This is indeed a propitious moment for Morocco, which is poised to act as a bridge between the West and a tumultuous, changing Arab world, much as Bogie’s gin joint served as a nexus for Vichy officials, Resistance fighters, fez-wearing power brokers, and Nazis. In ancient souks, vestiges of the country’s French colonial past merge with Arab, Berber, and African influences. Waiters at Parisian-style cafés read Le Monde, all while serving traditional Moroccan mint tea with lamb couscous.

While the Bloomberg story points out that much American business is now investing in Morocco, things are never that simple.

Some worry Casablanca will have trouble keeping its eye on the Olympic prize. If Casablanca got anything right about Casablanca, it may be the systemic corruption and Byzantine bureaucracy that many in the country lament. Kriger, who accuses local officials of “cartelism” and a “short-term mentality,” is pessimistic about Casablanca’s efforts at renovation and reform. “This is a city that could never get it done,” she says. Even Ahmed Chami, Morocco’s UCLA-educated minister of industry, commerce, and new technologies acknowledges that Morocco’s forward-looking leaders must contend with old timers who do not embrace 21st-century capitalism. “There are two different speeds in Morocco—slow and corporate,” he says.

So, while we await developments, it is important to ponder the thought that, as the winning city is announced seven years before the Games, Casablanca has a decade to get ready. Much can happen in that time; some of the athletes who could compete in the hypothetical Casablanca games haven’t even been born. So, head down to Rick’s Cafe, pull up a chair at the bar and relax as Issam plays As Time Goes By