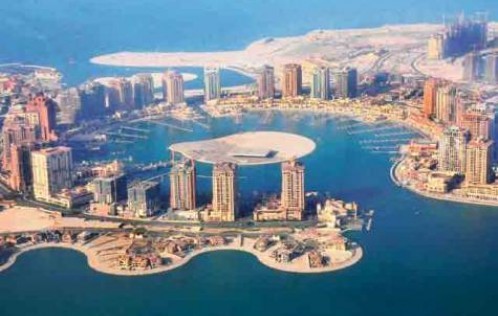 A ban on alcohol on Qatar’s man-made The Pearl Qatar island coupled with the naming of a large mosque after the founder of a puritan strand of Islam and online protests against various state-owned companies highlights domestic opposition to some of the Gulf state’s more forward looking policies as well as freedoms for soccer fans it is expected to host during the 2022 World Cup.

Qatari officials have said that the 500,000 soccer fans expected to descend on their country during the World Cup will be allowed to consume alcohol in designated zones. Alcohol is currently served exclusively in hotels and sold in a Qatar Airways–owned shop only to expatriates who hold a license.

The banning of alcohol on the island, whose restaurants are popular with Qatar’s growing expatriate community, was introduced in advance of the Al Kass International Cup, a ten-day Under-17 soccer tournament, involving top world clubs such as Paris Saint-Germain, Brazil’s Vasco De Gama (Brazil), Juventus, Ajax, FC Barcelona, Japan’s Kashima Antlers and Egypt’s, Al Ahly. It also came as senior international figures gathered in Doha at Qatar’s invitation to brainstorm over the role of sports in society and what governments, NGO’s and the private sector should do to promote sports.

Business at restaurants on the Pearl has dropped as much as 50 percent as a result of the ban. “Obviously the business has dropped; by half… for some restaurants, probably even more,” said  Sumeet Jinghan, country manager of Foodmark, whose brands include Carluccio’s, The Meat Company and Mango Tree.

Mr. Jinghan said Foodmark had suspended plans to open two more restaurants and a club on the Pearl, home to an estimated 41,000 residents, until it became clear whether the ban was permanent or not.

The ban did not immediately affect the Al Kass tournament which attracted primarily only local spectators. The competition offers Aspire Qatar, the Gulf state’s youth team, whose players include young Qataris as well as youths from Africa, Asia and Latin America selected in a yearly talent search from among some 500,000 aspiring soccer playing kids to compete against some of the world’s best teams.

The tournament is one initiative in Qatar’s emphasis on sports as a cornerstone of its foreign policy, development and effort to shape the energy-rich nation’s national identity at a time that youth-driven popular revolts have toppled the leaders of Tunisia, Egypt and Libya and pushed embattled autocrats in Syria and Yemen to the brink. Qatar’s Al Jazeera television network has played an important role in the revolts with Syrian President Bashar al-Assad accusing it of instigating and encouraging the protests against his regime.

“Our goal is to create a dialogue that resonates with and talks to the youth. This is an opportunity to inspire and engage young people…. Sports are at the heart of Qatar’s development… Sports like education and arts are part of our national identity,” said Noora Al Mannai, CEO of Qatar’s bid to win the right to host the 2020 Olympic Games. Ms. Al Mannai said “empowering young people” was one reason for the bid alongside Qatar’s efforts to mediate conflicts and reduce regional obesity and diabetes levels.

If sports are for Qatar’s leaders a key tool in forging national identity, banning alcohol is its equivalent for more conservative and nationalist forces in the Gulf state.

“I don’t see a reason to have alcohol. It impacts very negatively on locals. Locals are not happy with it,” The Wall Street Journal quoted Qatari writer Abdul Aziz Al Mahmoud as saying.

Conservative Qataris worry that an increasing number of their compatriots, often dressed in full-length robes, the Gulf’s national dress, drink publicly in hotels and bars. “It is a taboo in Qatar to see somebody wearing the national dress and drinking,” said Hassan Al Ibrahim, a Qatari commentator, according to the Journal.

Conservative fears in a nation where locals account for at best one third of the population were further inflamed when the Qatar Distribution Company, a Qatar Airways owned-retail shop, introduced pork alongside the alcohol it was already selling to expatriates. The introduction was one spark of an online call to boycott the airline.

Qatar’s The Peninsula daily reported that a group of some 500 Qataris had called for a boycott of the state-owned airline, a major tool in the positioning of the Gulf state as a global travel hub, in protest against its serving of alcohol on flights, high fares and failure to allocate more jobs to Qatari nationals. The protesters’ campaign featured the Qatar Airways logo with a no entry sign superimposed on it. It followed a similar protest in recent months decrying telecommunications services.

Qatar Airways has declined to comment on why its store had started to sell pork.

“I never thought the day would come that I have to ask the waiter in a restaurant in Qatar what kind of meat is in their burgers,” said a Qatari on Twitter.

“Ppl don’t get it. Its not about the pork—its about us feeling more & more like a minority—in our own country,” tweeted another Qatari.

The banning of alcohol as well as the shutting down of a weekly party on the Pearl, a development that bills itself as the Arab Riviera; the naming of a mosque in memory of Mohammed ibn Abd al-Wahhab, an 18th century warrior priest whose austere, puritan interpretation of Islam life shapes life in Saudi Arabia and inspires Qatari cultural traditions; and the online protests are likely issues that opponents of Qatar’s hosting of the World Cup will seize on in so far failed attempts to get the awarding by world soccer body FIFA reversed.

Al-Wahhab’s puritanism created the cradle of Salafism – an Islamic trend that propagates a return to the way of life at the time of Islam’s first 7th century caliphs and has emerged as a power political force in post-revolt Egypt. Saudi Arabia recently officially embraced Salafism as a key element in its soft power strategy aimed at countering Iran’s perceived revolutionary Islamic appeal as well as the wave of anti-government protests sweeping the Middle East and North Africa. The embrace also constitutes a response to Qatar’s idiosyncratic foreign and domestic policies.

That response is likely to sharpen the battle lines within Qatar as the Gulf state prepares to host perhaps not only one but two of the world’s biggest sporting events in the next decade.