Polygamy: It’s A Disaster For Women 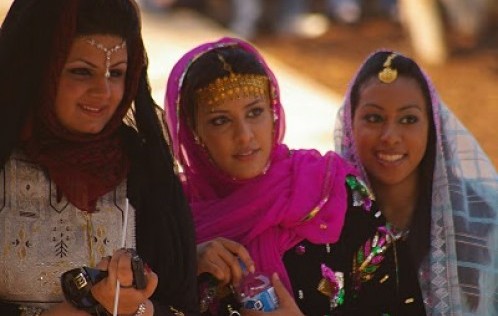 I come from a polygamist family. My father currently has three wives and fifteen children. Do you find that incredibly weird? I must confess, occasionally I do too. Most of the time, however, I never really stop to think about it.

A few months ago, I was on a training programme with young citizen journalists from different parts of the world. On our first day I spent my lunch break with a Muslim girl from Europe. Halfway through our meal, she asked the inevitable question, “How many siblings do you have?”

After I answered her, she was silent for a few moments, and then whispered, “I’ve never met anyone from a polygamist family before.” She spent the remainder of the programme questioning me about what it was like. To be honest, she made me feel like I’d just landed from outer space. I’ve been thinking about it ever since. Is it really that unusual?

Polygamy has been practised in different cultures around the world throughout history and is still legal in most Muslim countries, with the exception of Tunisia and Turkey. Even though it is legal, I know it’s not widely practised outside the GCC.

In Oman, polygamy may have died out in most areas up north, but the tradition is alive and well here in Dhofar. I assume the reasons behind this are somewhat related to the stronger tribal ties at this end of the country.

Why do men in Dhofar choose to take on another wife? Islam allows up to four wives under certain circumstances and conditions.

Despite this, I believe very few men in Dhofar these days remarry for religious reasons. I hate to sound negative, but most polygamists I know (the number isn’t small) remarried for entirely selfish reasons.

In many cases men take on a second or third wife to show off their wealth or to produce more sons who will carry on the family name. Some men who are unhappy with their first wives but can’t divorce them due to family pressure choose to remarry. A large number of polygamists marry women half their age to help the men feel ‘young’ again. That seems to be the most common reason.

There are also a small percentage of men who take on a second wife for semi-acceptable reasons. For example, a former neighbour of ours took on his deceased brother’s wife as a second spouse in order to take care of her and keep the kids in the family. I can’t say it made sense to me, but it seemed to work for them.

Some men whose wives are infertile will marry other women to bear children while keeping their first wives. Divorced or widowed women also tend to end up being second or third wives since most single men here wouldn’t consider them for marriage. Most polygamists take on a second wife after they hit 40 or 50 and realise they’re not getting any younger. Having two wives isn’t uncommon in Dhofar. Three or four is rare.

The big question is, does polygamy really work? In my opinion the answer is a big no. A few years ago I was involved in a research project here in Dhofar on polygamy. After hundreds of interviews and months of work, it became obvious that women are victims when it comes to polygamy.

None of the women we interviewed were happy in their marriages. On the other hand, the men seemed to be fine and most had remarried for entirely selfish reasons. It was truly heartbreaking.

Polygamy may have worked for many centuries and it probably made sense in many cases. However, in this day and age I think it causes more heartache than happiness and I’m confident that no man is able to love and care for two women equally, let alone four! Furthermore, no woman in her right mind wants to share her husband with another woman. Men may fantasise about being the perfect husband who loves and treats his wives equally, but who are they kidding?

People may argue that I’m generalising and that they know a happy polygamist family. But are they really happy? When two wives live under the same roof, they are under enormous pressure to appear to live harmoniously, regardless of their feelings. I’m sure there are a handful of really decent polygamists out there who treat their wives equally and who manage happy homes, but I have yet to meet one!

Naturally, the law in Oman doesn’t protect women when it comes to polygamy. A man can remarry without even informing his first wife. That doesn’t speak well for women’s rights in Oman, but I’ll save that rant for another week.

Many non-Arabs may wonder why the first wife simply doesn’t ask for a divorce if her husband comes home with a young wife. If only it were that simple! Most women above the age of 40 are not educated. They have no means of supporting themselves and probably have at least five children. Where do they go? Do they head back to their father’s house if he’s still alive? Camp out in their siblings’ spare bedroom forever? They have no choice but to stay with their husbands and endure the pain.

If you think polygamy will die out with the current generation of middle-aged men, think twice. I can think of three men I know under the age of 40 who have two wives. I also know two young women around my age who became second and fourth wives respectively in the past 12 months.

In fact, just a few months ago, a married man asked for my hand in marriage. I wasn’t planning on sharing that piece of information with the world, but seriously…how could I not? Someone in this day and age assumed a young independent woman like me would be okay with being a second wife! Fortunately, I’m not. As much as I love my family and all my stepmothers and step-siblings, I am against the practice.

On a final note, a couple of years ago I read an article that suggested polygamy contributes to lower divorce rates in Oman. Whoever assumed that probably hadn’t had their morning cup of coffee. Polygamy will die out sooner or later. Until then, please say a prayer for all the women who’ve suffered through this bizarre tradition. And if you have a positive polygamy story to tell, do share….

22 Responses to Polygamy: It’s A Disaster For Women