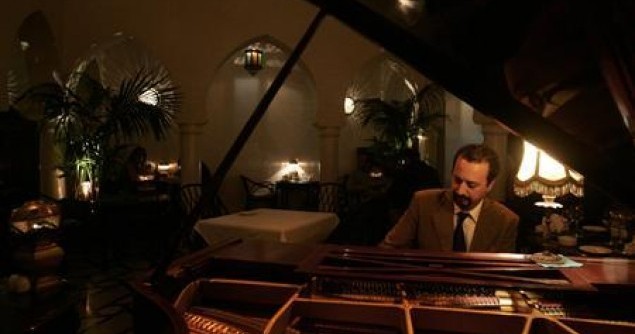 For many people the first time they heard of Morocco was when seeing the classic film Casablanca. The fact that the movie was not shot in Casablanca or indeed anywhere in Morocco, does not take away from the huge impact the film has had on popular conceptions of Morocco.  It has also had an impact on tourism. Now there is a new cause for celebration. On Monday November 26th Rick’s will be celebrating the 70th anniversary of the debut of the movie.

When Kathy Kriger made the decision to open a Rick’s Cafe in Casablanca the sceptics thought it would be a flash in the pan and probably a tacky Hollywood imitation. How wrong they were. Even if there had never been a film called Casablanca, Kriger’s Rick’s Cafe would still be worth visiting. Not only is the food exceptionally good, the decor, architecture and general ambiance make it a stand out.

For more than 60 years, tourists visiting Casablanca tried to visit Rick’s Café Americain only to discover that Warner Brothers had built the entire set on a studio back lot. In her book RICK’S CAFE, she takes us through souk back alleys, the Marché Central’s overflowing food stalls, and the shadowy Moroccan business world, all the while producing, directing, casting, and playing lead actress in her own story.

Instead of letters of transit, she begged for letters of credit; the governor of Casablanca watched her back instead of Captain Renault; and at the piano, playing “As Time Goes By,” sits not Sam but Issam. She encountered paper pushers, absent architects, dedicated craftsmen, mad chefs, and surprising allies. It took over two years, but Rick’s Café opened in 2004 to rave reviews. Now, as Captain Renault says to Major Strasser, “Everybody comes to Rick’s.” Kathy has brought to life the screen legend that has captured the imagination of generations.