Photo of the Year: One Tender Moment in Gaza 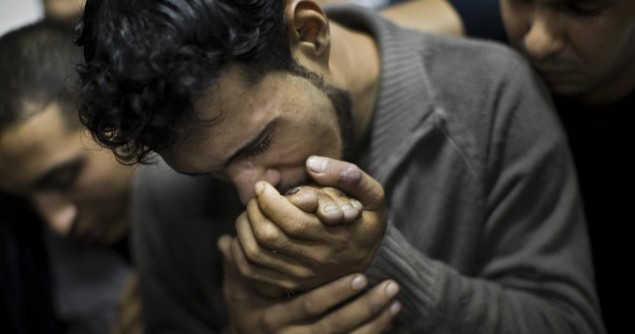 Time Magazine has named the best photos of 2012 and the first one is an image from Israel’s war against Gaza last month featuring a surviving member of the massacred Dalou family tenderly kissing the limb of a dead relative.  I’ve also included the back story offered by the photographer:

“Covering a conflict has never been a pleasure, but since I became a father a year ago, war has become even harder to cover. This day was particularly complicated; 11 members of the Daloo family had been killed when an Israeli missile struck the family’s two-story home in Gaza City, and I spent most of the day taking pictures of bodies being pulled out from beneath the rubble. I took this picture at the end of the day. The morgue was crowded and very noisy.

“Behind me, a few journalists were filming and taking pictures of four dead children of the Daloo family. In front of me, a group of men that had just stormed into the room were facing the cruel reality of discovering the dead body of a loved one. Everything was happening very fast, but I remember seeing a teardrop falling over the inert hand and whispering “ma’a salama” (goodbye in Arabic). I’ve always thought that war brings out the best and the worst in humans. To me, this was a sad and tender moment of love.”

I hope that images such as this will ensure there will eventually be some measure of justice not just for the victims of this family, but for all Palestinian victims of injustice in this conflict.  I also believe the sooner their killers are held accountable the sooner Israeli victims’ claims will be addressed as well.

One Response to Photo of the Year: One Tender Moment in Gaza