Panetta to Israel: “Get To the Damn Table” 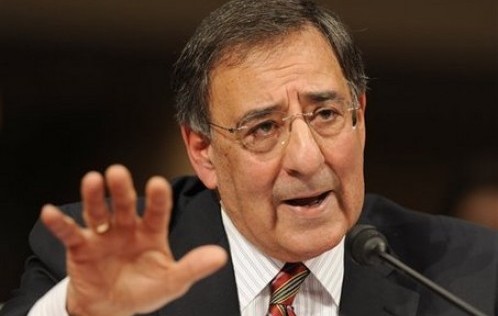 New mood on campus. In the same spirit as David Remnick saying, I’m sick of the occupation. I’m not sure this will mean anything in the end. But it reflects the fact that realists have actually pushed out the neocons in Washington, except that is in the presidential fundraising arena. Because they know the situation is unsustainable. Notice that Panetta made his comments at the heart and soul of the Israel lobby, in an exchange at Brookings’s Saban Forum– in Hebrew above for those of you who don’t speak English– with Ken Pollack, the man who did as much as anyone to start the Iraq war.

SEC. PANETTA:  Just get to the damn table.  Just get to the table.  (Applause.)  The problem right now is we can’t get them to the damn table to at least sit down and begin to discuss their differences – you know, we all know what the pieces are here for a potential agreement.  We’ve talked it out, worked through, we understand the concerns, we understand the concerns of Israel, understand the concerns of the Palestinians.  If they sit at a table and work through those concerns, and the United States can be of assistance in that process, then I think you have the beginning of what could be a process that would lead to a peace agreement.

I picked this up from David Ignatius’s report at the Washington Post:

Obama administration officials often seem to be walking on eggshells when they talk about issues involving Israel. So it was interesting Friday night to hear Defense Secretary Leon Panetta forcefully caution a U.S.-Israeli audience about the dangers of bombing Iran and tell Israel to “just get to the damn table” in peace negotiations with the Palestinians.

Panetta was speaking to a gathering of the Saban Forum, an annual U.S.-Israeli dialogue about issues affecting the two countries. He made the comments in a unrehearsed question-and-answer session following what was a fairly cautious and predictable speech. He liked the “just get to the damn table” line so much that he repeated it, for good measure.

The most revealing answer came when Panetta was asked how long an Israel bombing attack on Iran would retard that country’s nuclear program. He argued that because targets are dispersed and hard to destroy, such an attack would likely delay Iran’s ability to make a nuclear weapon by only one to two years….

The audience included senior Israeli officials attending the forum. They gave Panetta a standing ovation at the end of his remarks.

2 Responses to Panetta to Israel: “Get To the Damn Table”